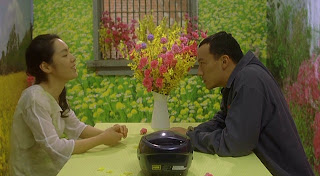 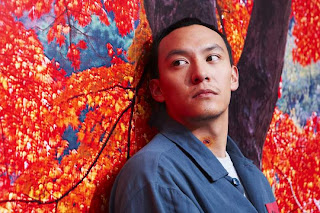 BREATH (Soom)                                       C
South Korea  (84 mi)  2007  d:  Kim Ki-duk
Apparently the Kim Ki-duk controversy is still brewing, as one of the scathing accusations made by film critic Tony Rayns in the November/December 2004 issue of Film Comment is that Kim “shamelessly plagiarizes,” calling Kim’s 3-IRON (2004) a rip-off of Tsai Ming-liang’s VIVE L’AMOUR (1994).  Now nearly four years after the film opened in Korea and at Cannes, and three years after it premiered at the U.S. Palm Springs  and Portland film festivals, this movie is finally getting a release in Chicago, and the film also has the Tsai Ming-liang imprint (for Christ’s sake, the message here is that Tsai Ming-liang’s films are starkly original), namely THE HOLE (1998) or again in THE WAYWARD CLOUD (2005), where Tsai inexplicably makes a quick exit from the monotonous, dreary reality depicted onscreen with a jolt of color and musical extravaganza, breaking out into the nostalgia-tinged artifice of song, which is a complete shock to the system.  Also doing a riff on one of his own themes, namely the changing seasons, Kim mixes the two together in what initially feels like a satire on Korean cheerfulness, where that ever present artificial smile is ingrained into the culture.  But he goes nowhere with this idea, so by the end of the film it really does feel like he simply stole the idea.  This film is structured around a loveless and near wordless marriage (only the husband speaks), set inside a spaciously modernized apartment that probably didn’t come cheap, where artistically inclined Yeon (Park Ji-a) creates sculpture objects while her boring, completely unimaginative yet overbearing husband, Ha Jung-woo, barks out orders and commands that she simply ignores.  His authority is passively undermined by her mute response.  Instead, she’s fascinated by the TV news reports about a convict on death row that has attempted suicide twice by jabbing a sharp object into his throat, but has recovered each time, effectively extending his date of execution.  The husband callously turns off the TV and tells her to find something better to do.
Yeon finds herself inexplicably grabbing a taxi cab heading for the prison asking to visit the condemned killer Jin Jang, none other than Chang Chen, or 14-year old Xiao Si’r from Edward Yang’s autobiographical A BRIGHTER SUMMER DAY (1991), now seen some twenty years later sitting on death row, also playing a mute character due to the throat injury (evidently the Taiwanese actor speaks no Korean).  While she has no business whatsoever getting in, after an initial rejection, the warden, played by the director sitting in an enclosed booth with cameras following her every move, mysteriously allows the visit, including every known violation of prison security, where she speaks plainly and openly to this prisoner, recounting a personal story of her youth, returning home to her husband afterwards who is stunned and perplexed, thinking all along that his wife never left the house.  But she gets a taste for it, buying herself a bright yellow spring dress and hops back in a cab for the prison, this time plastering the walls with a colorful décor, adding flowers and turning the room into a spring paradise, placing a boom box on the table and sings some karaoke style ode to spring, which couldn’t be more preposterous, as she has a terrible voice.  After another frank discussion where she reveals some more deeply personal thoughts, she leaves a picture of herself as a little girl for the prisoner, which of course the other prisoners fight over once he’s back in his cell, which he shares with 3 others, none of them ever uttering a single word.
At some point, the artifice of the musical number joins the script as well, becoming blatantly absurd with only rare moments of humor.  You’d think the film was heading somewhere, as the song’s artificial cheerfulness does seem to be a statement about the nation’s identity, as this is how Koreans continually express themselves, this is the face they show even during troublesome times, and both Yeon and the condemned man actually share a life of drudgery, yet both remain mute on the subject.  There’s no evidence however that this is what Kim had in mind, as Yeon develops a blasé attitude about her family and casually returns for summer karaoke, where the summer beach décor is especially outrageous, especially when the prisoner puts on the giant-sized plastic dark glasses, but by now the storyline is following an all too predictable pattern, as she returns for fall, and yes even winter – no surprise.  What gets ridiculous is the empty-headed idea that somehow this kind of bone-headed therapy is actually helpful to Yeon’s marriage.  In other words, the director starts taking this outlandish idea seriously.  Well all one can say is thud, as there goes all interest and plausibility, as all that’s left is watching the director lose his grip over his own material.  What makes Tsai Ming-liang’s material work so well is his complete lack of pretentiousness, even in scenes that are plastered in highly decorative artifice or absurd humor, as there’s an authenticity underneath that simply doesn’t allow pretense.  His films express genuine human concerns, where the drama can take any number of directions, but there’s a universality that’s unmistakable.  Not so here, as Kim’s storyline plods on, growing predictably repetitive and ever more pretentious, losing every ounce of credibility earned by the originality of that first musical sequence.  What was initially amusing and clever, perhaps still holding up the second time, but repeated four times, as if a marriage can be saved by the spin cycle, couldn’t be more ludicrous.  Chang Chen and Park Ji-a are both excellent, and their unusual performances are to be admired, but there isn’t an ounce of believability here, as the director simply became enamored with his own idea and undermines it, leaving behind a movie that’s pretty to look at, but not much use to anyone.
Posted by Robert Kennedy at 2:32 AM