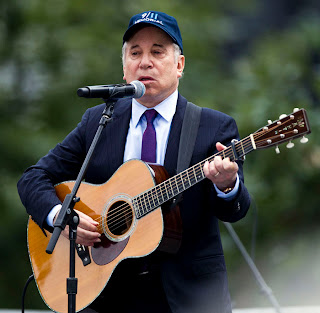 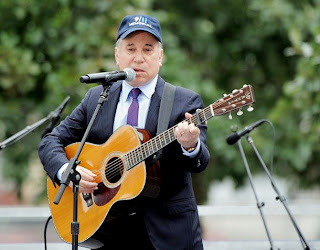 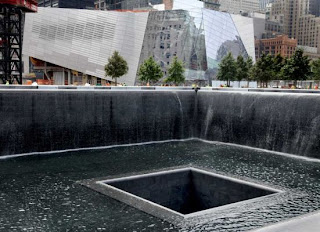 Paul Simon made a last minute decision to change the program, as he was scheduled to sing Bridge over Troubled Water at the 9/11 Ceremony today at Ground Zero, but instead chose to sing the more eerily poetic Sounds of Silence, which can be seen on YouTube here:


Paul Simon's Heartbreaking 'Sound of Silence' at Ground Zero ...
Simon still has that recognizable voice that we're used to hearing, changing the rendition somewhat, almost singing in hushed tones, but unlike others like Dylan, Lou Reed, Leonard Cohen, and others, he hasn't lost his singing voice, where on this occasion his sincerity is the thing.
I don't know who programmed this event, but the choice of Simon makes this a profoundly chilling moment.
Folks, this is YouTube cinema at its best!!
Paul Simon Performance at Ground Zero Is the Highlight of Memorial


Paul Simon Performance at Ground Zero Is the Highlight of Memorial Service
by Jacqueline Burt at Cafe Mom, September 11, 2011
Of course Paul Simon was going to give an unbelievable performance today at the World Trade Center memorial service at Ground Zero; that came as no surprise. But his last-minute decision to play a different song than originally planned resulted in the most unexpectedly moving moment of the day. In fact, it might just go down as one of the most moving moments in music history.
According to the official program, Simon was going to play "Bridge over Troubled Water." But instead, when he put on a 9/11 hat and picked up his guitar, he launched into "The Sound of Silence."

Which turned out to be just about the best decision he could have made.

I can't think of a more appropriate song for Simon to play, particularly considering WTC officials' request that all Americans observe a moment of silence at 1 p.m. today.

The lyrics, meanwhile, proved almost eerily profound:
Hello darkness, my old friend
I've come to talk with you again
Because a vision softly creeping
Left its seeds while I was sleeping
And the vision that was planted in my brain
Still remains
Within the sound of silence
The fact that he grew up in New York added still more depth and relevance to Simon's appearance. To hear him sing "the words of the prophets are written on the subway walls" ... well, it was enough to give those of us who lived in NYC during the attacks chills.
"Bridge Over Troubled Water" would have worked, too, certainly. But to me, "The Sound of Silence" was perfect. Humbled and broken but still beautiful, deeply respectful to the collective pain of those mourning the thousands of victims lost that day. The pain that's just as raw today as it was ten years ago.
Posted by Robert Kennedy at 7:06 PM