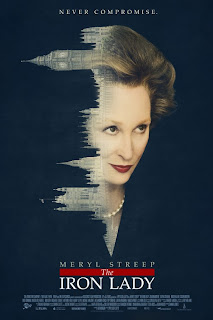 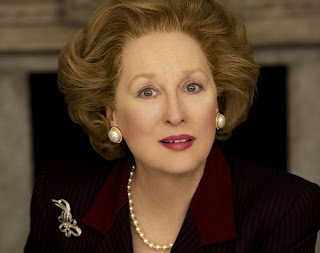 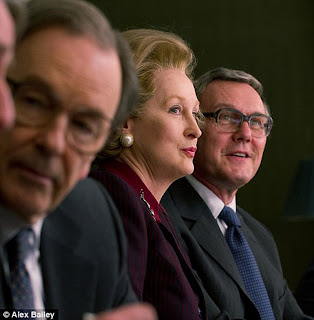 THE IRON LADY                   C
Great Britain  (105 mi)  2011  ‘Scope  d:  Phyllida Lloyd           Official site
First we have a biopic on FBI Chief J. Edgar Hoover, J. EDGAR (2011), that suffers from selective amnesia, now followed closely on its heels comes a biopic on Britain’s first female Prime Minister (1979 – 1990), Margaret Thatcher, who herself is suffering from dementia throughout most of the film.  Both are iconic figures of the political right and both are despised by their opposition who they attacked ruthlessly during their autocratic rule.  Starring Meryl Streep and a good deal of make up allowing her to play Thatcher in her waning years as well as in her prime, it is a showy performance intended to shine the spotlight on Streep as a female King Lear figure, where the light is less flattering when shone upon Ms. Thatcher, who like Ronald Reagan in America, rode a populist trend towards nationalism, reaffirming people’s belief in being British, while refusing to negotiate or compromise with antagonistic opposing views, calling it a moral choice, such as trade unions (resulting in rampant unemployment) or the IRA (resulting in a flat out war with Northern Ireland, with Thatcher allowing the imprisoned Irish hunger strikers to die senseless deaths rather than be considered political prisoners), where perhaps the finest moment in the entire film shows Reagan and Thatcher dancing to the music of the Sex Pistols (like Nero as Rome burns) as the streets are bloody with endless demonstrations. Like Thatcher, Reagan suffered a similar fate with Alzheimers, where both went gently into the good night.  Thatcher seemed to have sacrificed everything in her rise to power, as her family life was all but destroyed in the process, finding herself alone in her twilight years flooded by memories and hallucinations swirling around her, often indistinguishable from reality, where she is constantly visited by the ghost of her deceased husband played by Jim Broadbent.
While it adds a certain theatrical heft for Streep, too many scenes of Thatcher as a doddering old woman ruin the film, as they distract from what makes Thatcher unique in history, a woman breaking into an all-boys political network, which is nothing less than fascinating.  Irrespective of her political views, that’s an outstanding achievement of historical precedent and it’s easily the most exciting part of the film.  The bombastic music by Thomas Newman adds to a series of riveting moments when she stands up to the men in Parliament who attempt to heap scorn and ridicule upon her and brilliantly argues the Conservative side’s point of view, becoming the best spokesperson for her party because she passionately defends her positions.  The problem with the film is in the screenplay, which would probably work best accentuating the performance of the actress in a theater, who may hold the audience spellbound, but on film it spends too little time during the period when Thatcher was actually making history, brushing over those moments all too quickly with broad strokes, barely cracking the surface in terms of adding any psychological dimension.  Instead the movie recounts a few pertinent moments, offers a few self-righteous and indignant Thatcher speeches, shows a rumble on the streets happening outside as the population explodes against her austere business measures that put so many out of jobs and subsequently lose their homes.  It is a period where the rich get richer, while the poor suffer terribly.  Thatcher and the Conservatives have little sympathy for the poor, claiming each individual needs to climb out of poverty on their own without clinging to government for a handout, sounding more like class contempt than statesmanship.
The British theater director Phyllida Lloyd is known for her work in opera, also the feelgood Streep musical MOMMA MIA! (2008), but makes exquisite use of a Maria Callas aria “Casta Diva (Chaste Goddess)” from Bellini’s Norma Casta Diva -- Maria Callas (Best) - YouTube, which is closer to the film version (5:44), or seen here in a live performance in Paris, 1958, also adding the follow up aria “Ah! bello a me ritorna (Beloved Return Unto Me):  Casta Diva (Maria Callas) - YouTube (9:25), shown during Thatcher’s dramatic, rose draped, exit from power, accentuating the precise moment when her reign is over.  Interestingly, during her elderly years, she’s more fascinated with Yul Brynner singing showtunes from The King and I, where she can recite how many performances played in New York and London.  One nice touch Lloyd brings to the screen is her initial obsession with feet, much like Bresson, where all are wearing men’s shoes except one pair of feet, which is a beautifully cinematic expression of making her entrance into the exclusive, all-male fraternity of British Parliament, where the “male members only” private chambers is a spacious, immaculately designed, crowded library and bar, while a glimpse into the “women members only” chambers is a lone chair and an ironing board set in the tiny quarters resembling a closet.  Compared to the era when Thatcher was remarkably making history, included among peers of international leaders where it was the Russians who coined the phrase “The Iron Lady,” the retreat to watching her feebly sitting at home in a darkened room watching home movies seems anticlimactic.  Too much time is spent watching her babbling to ghosts or fuss about what to wear, which diminishes her stature and makes her feel downright ordinary, missing an opportunity to become intimately familiar with what drove a woman of such unique stature.  Unfortunately, the film pales in comparison to the excellent, behind-the-scenes portrait of THE QUEEN (2006), which shows a woman struggling with her own place in history.
Posted by Robert Kennedy at 5:03 PM