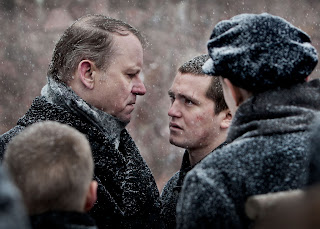 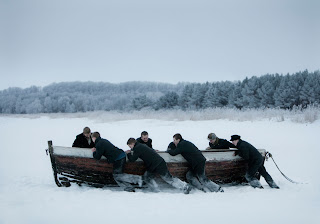 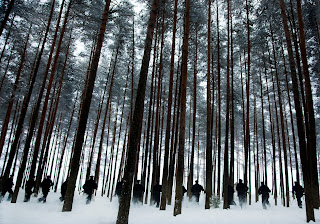 A different side of Scandinavian films that we rarely see, one that is as brutally harsh as the bleak wintry landscape, where fortitude is built by learning how to survive in the worst circumstances, where in this part of the world surviving the elements is a continual test of character.  Based on a true story in 1915, set on the island of Bastøy on the North Sea inlet south of Oslo, they run an Alcatraz style prison for delinquent boys, where some may be orphans, some have mental health issues, others may have been caught for petty crimes, or may just be poor, but boys from 8 to 18 languish on this penal colony for years paying a kind of eternal penitence, where getting lost in the system is an understatement, as their release depends upon the discretion of the sadistic Governor in charge, Stellan Skarsgård, who firmly believes hard work and a firm stick will somehow transform these unruly boys into model citizens.  His job is to mold them into compliant citizens that obey rules and follow orders.  The truthful severity of the brutal acts against children make this kind of film off limits to American filmmakers, as this honestly exposes a kind of monstrous inhumanity within Norway’s own history that’s missing in American films.  Some of the best remembered prison films are A MAN ESCAPED (1956), THE GREAT ESCAPE (1963), COOL HAND LUKE (1967), IF… (1968), ONE FLEW OVER THE CUCKOO’S NEST (1975), SHAWHANK REDEMPTION (1994), where each one raises the question of prisoner escape, seen by the other inmates as an act of heroics, yet not so the warden who must make an example to deter similar actions, resorting to ruthless measures if caught, making one think twice about ever doing it again.  Each of these movies suggests men can only endure so much torture and relentless oppression, resorting to wit and bravery to conjure up improbable acts of escape, but not so here, as someone instead irrationally refuses to escape when the door is left wide open, where this may have you on the edge of your seat.

Unraveling as a story within a story, where a young harpooner aboard a Moby Dick style whaling ship marvels at the endurance of a whale that has been shot 3 times, yet still manages to elude them throughout most of the day, a theme turned back upon the humans, as it is their own beastly behavior that takes centerstage in this film.  With the arrival of two new inmates, a burly young sailor Erling (Benjamin Helstad) immediately disrupts the balance of power by challenging the status quo, threatening escape almost immediately, which places the other boys in jeopardy, especially Olav (Trond Nilssen), who is given responsibility over his dormitory as he’s expecting his release soon, considered a model prisoner.  What’s especially interesting is the interplay between these two, as they are polar opposites with uniquely compelling viewpoints.  They immediately test one another with a kind of LORD OF THE FLIES (1963) psychological battle of wits, while at the same time the Governor is testing the rebellious nature of Erling, continually adding harsher work details which makes his workmates miserable, but he continually takes the brunt of it, routinely given added punishments where he’s mindlessly ordered to move a pile of rocks ten feet away into another pile, only to be instructed afterwards to move them all back again.  The viewer soon discovers the island is a child labor camp, where they perform farming and forestry work details, with society getting a special bonus out of their cheap labor.  Except for the leads, most of the kids are non-professionals, where with little dialogue the director subtly weaves into the fabric a sense of community from the boys point of view, as they’re all victims of the same inhumane living conditions, where what’s missing is the capacity to look out for one another.

What’s especially effective is the gorgeous ‘Scope camerawork from John Andreas Andersen whose sweeping panoramas and wintry landscapes look brutally cold, where winter never looked harsher and more ominous, where these are boys, after all, continually punished and brutalized in the name of some utterly fictitious social good, the Governor’s goal of making them “honorable, humble, and useful Christian boys,” as if he could beat them into submission.  While the tense build up of the inevitable rebellion may be held back too long, as there’s little doubt the floodgates at some point will open, when they do it comes with a flurry, all precipitated by extreme abuse to the weakest among them, a boy violated by the housemaster, Kristoffer Joner, in a role reminiscent of Donald Sutherland’s sick portrayal of a fascist baby killer in Bertolucci’s 1900, especially when the peasants turn on him.  So it’s not heroics but abuse of power, a cowardly cover up, where contemptible lies are met with anger and disgust, which has an initial liberating effect, but a bit like Haneke’s FUNNY GAMES (1997), the initial wave of hope is crushed with even harsher and more barbaric methods, making things seem hopeless before a sea change of communal emotion comes swiftly crashing through the gates like a raging flood, an apocalyptic response to the torrent of sins heaped upon them.  The chaos that follows is just that, a sprawling, sweeping flow of events that comes to resemble the image of that wounded whale ferociously fighting for its last gasp of freedom.  Holst is at his best in the extremely personal finale, pitch perfect and beautifully staged, thrilling to watch, where he judiciously takes his time allowing events to play out, becoming a poetic reverie of innocence lost.  Shot mostly in Estonia, the music by Johan Soderqvist is especially captivating, offering a somber lament at exactly the right moment, adding a layer of quiet intimacy to a beautifully accomplished film.
Posted by Robert Kennedy at 12:49 AM