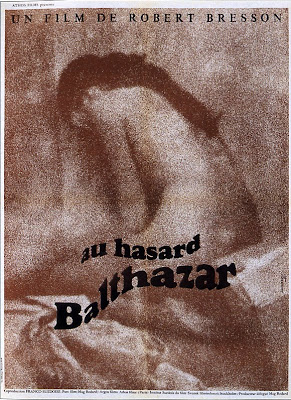 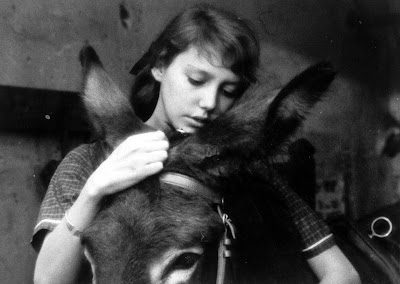 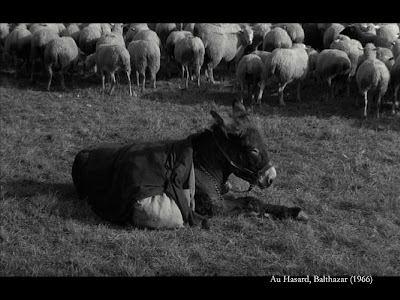 A near perfect film, one of the great metaphysical films of all time and one of the most unique religious expressions, Bresson rids his actors of any facial emotion, yet this film never fails to provide an excruciating emotional release, offering a precise, yet extraordinary poetic glimpse into the sublime by identifying human suffering with a common farm animal.  People's lives revolve around Balthazar, yet their lives become increasingly insignificant as time goes by, as we identify instead with a donkey.  Voted among the Top-Twenty all time films from the most recent 2002 Sight and Sound Critic’s Poll (Read the critics’ complete list), this is a film that inspires without grandiose imagery or any memorable tricks or techniques, instead relying upon superb visual storytelling, which leaves out all the unnecessary little details as it follows the spiritual odyssey of a donkey named Balthazar, whose brays at birth are interspersed between the sublime Andantino piano movements of Schubert’s A Major Piano Sonata No. 20 (D. 959) Franz Schubert - Sonata  Wilhelm Kempff on YouTube (7:35), among the best and most effective uses of music anywhere in cinema, especially the very sparing use, which provides a haunting sensitivity to the character of Balthazar, and therein lies the essence of this film, as it’s a view of the divine through one of the most common and durable farm animals among us.

It’s a bit like a Buñuel film, as there’s something of the absurd underlying this exercise of following the life of a donkey in a story that is enveloped in Christian themes, as from birth to death this film examines the human condition through the silent suffering of this animal, who represents a state of grace while all around him self-centered humans reveal themselves to be so much more miserable and wretched creatures, personified by the influence of a bad seed teenage sociopath Gérard (François Lafarge), a sadistic altar boy gone astray, but he is the love interest of an innocent young girl named Marie, Anne Wiazemsky, who later married Jean-Luc Godard and also wrote a book Jeunne Fille describing her experiences during the making of this film, who falls under Gérard’s charm, but he seems to bring havoc and ruin into everyone’s lives.  It’s a near wordless film, where cinematographer Ghilsain Cloquet effortlessly captures the rhythms of life with characters who come and go, their passing lives a story within a story.  One is even a Mary and Joseph (Marie and Jacques) story where Balthazar’s misfortunes parallel that of Marie, continually seen with best friend Jacques as children, but is continually abused and mistreated throughout her adolescent life, where characters are making choices that they end up spending the rest of their lives trying to undo, regretting lost opportunities that seem to have evaporated into thin air.  Some are seen as humorous, others are sad and pathetic, but all pale in comparison to the noble dignity of this silent creature, a saint who walks among us like a cloud, seen but unseen, used but unappreciated, as humans are too busy selfishly seeking life’s personal rewards by ignoring the natural mysteries that surround them.

While this doesn’t have the spare minimalism of Bresson’s previous films, allowing brief interludes from a classical piano soundtrack to intrude throughout the film, even the use of a trained, professional donkey (see the mathematics circus sequence), it is one of his most accessible and easily his most transcendent, perhaps the best balance and purest expression of Bresson’s art, plumbing the depths of his own concept of spirituality, especially in connection to the physical world around us, as the profound emotional connection between this film and a universal audience is undeniable.  The entirety of this film makes all the difference, especially the effect the finale has on everything that comes before, moving through ebbs and flows of what life has in store for us, featuring petty characters overcome by pride or stubbornness, often exhibiting senseless or even idiotic behavior, expressing stupidity, meanness or drunkenness, where the hostile mistreatment of others can at times feel overwhelming, creating an indomitable mood of oppression.  But these human characteristics are always shown through vignettes, suggesting they are not a permanent human condition, but transitional episodes, where there is the feeling that evil is not inevitable, but correctable, just a behavior flaw, like a form of temporary insanity.  Bresson always finds harmony and balance by returning to the poetic grace of Balthazar who quietly endures despite his continual mistreatment.  By the end, Balthazar is centered in an idyllic pastoral paradise, where he walks among the flowers and the sheep and finds a kind of inner peace and contentment, a transcendence from all things earthly and human, so poetically rendered in the film’s enormously effective final scene.
Posted by Robert Kennedy at 10:37 PM