Back In Your Arms (Kai apkabinsiu tave) 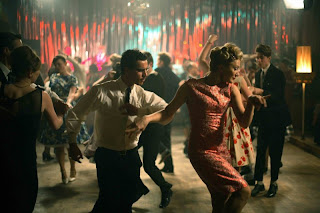 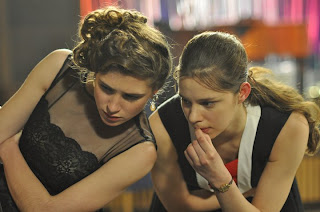 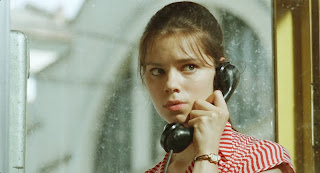 BACK IN YOUR ARMS (Kai apkabinsiu tave)                 C+
Lithuania  Germany  Poland  (90 mi)  2010  d:  Kristijonas Vildziunas
A common theme in former Eastern bloc Soviet nations, now that they’re members of NATO and the European Union, is to conveniently blame the Russians in all embarrassing historical references, as if they’re playing the American John Birch Society conservative card of the Republican Party back in the 1950’s, which blamed Communism for all the evils around the globe. What’s missing, of course, in this Lithuanian entry for Best Foreign Film, is any Lithuanian complicity in their own nation’s muddled affairs.  The Lithuanians were notorious Nazi collaborators in rounding up and exterminating Jews, murdering 190,000 Lithuanian Jews, which comprised 91% of the pre-war population.  Taking place in 1961, this is a historical Cold War drama set in Berlin just weeks prior to the construction of the Berlin Wall, as citizens from East Berlin are flooding to the West in record numbers, around two and a half million people alone in 1961, arousing the suspicion of both sides, but especially the Communist East German side as they need to implement a plan to keep their citizens at home.  Using archival footage of the era, what’s interesting is the picture of perceived freedom, a kind of idealized state of mind that doesn’t really exist in the East, as all citizens are under suspicion, where persons crossing the border walking on the sidewalk in the Western sector may be stuffed into a Stasi secret police vehicle taking them back into the Eastern sector where they likely face arrest on some contrived charge.  The director wrote this story, which could just as easily be a play, as except for the archival street scenes which could be projected onto the wall of a theater production, most all of it takes place in various rooms, where the tense atmosphere on both sides of the border is supercharged with paranoia and a Kafkaesque suspicion.
Elzbieta Latenaite plays Ruta, a Lithuanian-American studying in Hamburg, who travels to Berlin with her friend Aukse (Jurga Jutaite) after she receives word that her father, unseen since age 5, would like to meet her there.  Flashback sequences show the family predicament just prior to their escape to the West, where their left leaning father stayed behind under Soviet occupied Lithuania, replaced by the Nazi’s during World War II, then re-occupied by the Russians again after the war, eventually becoming the first Soviet nation to declare their own independence a year prior to the break-up of the Soviet Union.  In 1961, a phone call could not be made from the West to the East, as calls would have to go through the embassy, so she and her father reach a state of limbo unable to contact one another.  When suspected Stasi agents arrive to pick her up to drive her to the East sector to meet her father, she suspects something is not right when her father is not with them, and is advised not to accept in order to protect herself, as people are whisked away to the East never to return.  However she is motivated to find a location where she can call her father, eventually wandering into the East section on her own, where instead of normal accommodations, buildings remain in a state of ruin after the war, never really repaired, where she ends up in a no man’s zone, a kind of empty, nightmarish dead zone.  Her call goes through, but her father is out searching for a way to contact her.
Again, seen through flashbacks, we see that her father (Andrius Bialobzeskis) was an actor in Lithuania, seen carrying the cross during a Passion Play performance prior to the Soviets banning all crosses, icons, and references to religion.  What constitutes the narrative is the behind-the-scenes chess game taking place by both sides, each suspecting the other, each trying to out think the other side, where Ruta finds much of this nonsense, as all she wants is to see her father.  However, as people disappear without a trace, or hop into taxi’s that smuggle people back into the East, it is an uncertain time, especially for a woman on her own.  Ruta, however, has a network of friends and associates who are continually looking out for her, while her father, on the other hand, is being manipulated by Stasi agents in an attempt to lure his educated daughter into the East where she might be trained as an agent.  The film has that heavy handed treatment of Communist life under a totalitarian system, where her father may as well be in Siberia at a gulag camp by this portrayal, where all the citizens of the East live under a dictatorial police state.  The exaggerated portrayal of good and evil are a bit much, where just about anyone shown onscreen could be a spy, think Boris Badenov and Natasha Fatale in the infamous Rocky and Bullwinkle cartoons, resorting to melodramatic stereotype and caricature instead of anything resembling social realism, which has become a lost art in the former Eastern bloc nations which, if truth be told, aren’t making films nearly as high quality as when they were under a state run Communist regime.
Posted by Robert Kennedy at 12:45 AM