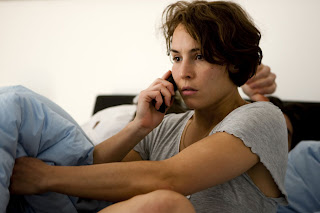 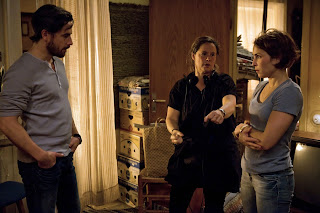 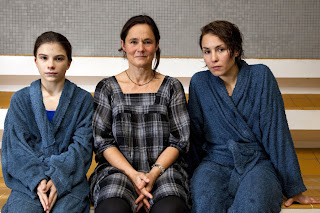 BEYOND (Svinalängorna)    B+
Sweden  (99 mi)  2010  d:  Pernilla August
A wrenchingly dramatic take on family dysfunction and death and dying, as expressed by Bergman actress, now first time feature filmmaker Pernilla August, in what might be a variation on the FANNY AND ALEXANDER (1982) story had their parents been trailer trash alcoholics.  A two-tiered story that slowly unleashes unpleasant truths about a woman’s miserable childhood, where Leena (Noomi Rapace) becomes consumed by her past, something she’s spent her entire life trying to forget, literally forced to relive various flashback moments from her traumatized past after she receives a call that her dying mother may only have a few hours left to live.  Despite the fact she’s had no contact in years, her two children are surprised to hear about a grandmother they never knew existed, so at the urging of her husband, Rapace’s real life husband Ola, they make an obligatory family visit.  While this plays out, a parallel story unearths the horrible tragedy that spells out Leena’s unfortunate childhood when she was forced to witness a continuous series of brutal beatings of her mother (Outii Mäenpää) by her abusive father (Ville Virtanen), both Finnish immigrants forced to take the lowest paying positions to survive, continually ending up drunk, making life miserable for young Leena (Tehilla Blad) and her even more troubled younger brother Sakari (Junior Blad), both of whom must find a way to survive.  Interestingly, Blad and Junior’s sister Alpha plays one of Leena’s two daughters, while one of August’s own daughters provides the inner narration of Leena making entries into her diary, which offer some of the most insightful personal observations in the film.
Adapting a Susanna Alakoski novel, August’s film is a master class of dramatic acting performances all around, nominated as Sweden’s Best Foreign Film, where despite the big names in Swedish and Finnish theater, Tehilla Blad steals the show, providing a heartbreaking performance, where her lone determination to succeed and save her family is otherworldly, showing wisdom beyond her years, even if it ends in utter disaster, something she can never forgive herself for.  Rapace was the traumatized child survivor in the Millenium Trilogy (2009), another vulnerable character shrouded in secrets that operates with utmost conviction, offering another blisteringly intense performance.  Beginning with early optimism from their initial move into the housing project, seen as an upgrade from their tinier residence, everyone’s initially on their best behavior until slipping back into the devastating blur of events of soon forgotten memories, though you’d have to be drunk to forget, otherwise imprinted into the shell-shocked lives of two young kids who deserve better, where it gets so bad Sakari stops eating and speaking.  In one sequence, young Leena lists in her diary all the profane and horrible names her father calls her mother in the heat of anger, where this sequence of vivid reminders of a man’s contemptuous and vile view of women is hard to forget, especially at an impressionistic young age, where living with these hellish parents is equivalent to serving in combat.
As Leena reluctantly comes out of her adult shell, nudged by her husband and family, it’s scandalous what she’s been keeping locked up inside for so many years, but perhaps only because she remembers it so well, as her fiercely deterministic attitude to overcome it as a child is met with the force of physical brutality and emotional indifference, where her mother would continually forget just how bad things really were.  Outii Mäenpää is no great prize as a mother, but she’s a force to be reckoned with onscreen, where her conflicting emotions are continually ripped into smithereens, leaving her available as a battering ram for her Neanderthal brute of a husband.  Yet near death, she recollects these years fondly, still clueless what any of this really meant to her children, thinking only of herself, the devoted wife who yearns for that man, wishing to be close to him even in death.  This is a mercilessly punishing work, where the seeds of wrath have lifelong ramifications that remain hidden, out of sight, where women have bore the brunt of this kind of savage marital treatment for centuries on end.  Yet while it was happening, in the midst of this nightmarish fiasco, young Leena is continually adding poetic reflections into her diary, observing the world around her with a keen sense of intelligence and sisterly obligation, as if it’s her responsibility to clean up her family’s embarrassing disasters, one day following the next, where it always falls upon her young shoulders, where she must somehow find a way to make things all right.  Off course it’s never enough, as people with this degree of damage and self loathing would never listen anyway.  While this may be too graphically raw and bleak for some, in this searingly graphic portrayal August takes us into the heart of domestic violence, a turbulent hurricane of destruction that wreaks havoc on anything it touches, laying waste to human lives, who in the end are only so much collateral damage.
Posted by Robert Kennedy at 11:33 PM