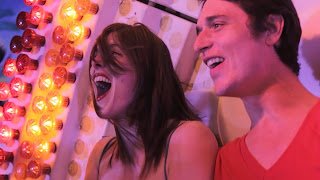 DECLARATION OF WAR (La Guerre est Déclarée)              C
France  (100 mi)  2011  ‘Scope  d:  Valérie Donzelli
A stylistically interesting but overly cute depiction of a grave autobiographical subject, the discovery of a brain tumor of an 18-month old child, told with a lighthearted flair by the parents, given a stylistically superficial flourish that simply wipes the grim reality away, out of sight, out of mind, as this contemporary love story instead accentuates the journey of the parents, focusing all the attention on them.  Written and acted by the real parents, directed by the mother, this feels like a somewhat deluded, self-congratulatory story, where the pretentious, overly exaggerated French tone feels wrong from the outset, yet this film was invited to open the Critics’ Week at Cannes, was nominated for 6 César Awards in France, the equivalent of their Academy Awards, and has received much critical acclaim.  So what gives?  One would have to compare a similarly morbid story by Gus van Sant in Restless (van Sant) (2011), a romance of young adolescent lovers where one is terminally ill, which received some of the worst critical reviews in his entire career, yet what van Sant does is reveal the fragility and tenderness of two damaged souls who have no one else on the planet, capturing their alienated spirit with a kind of clever teenage goofiness that endears us to their characters.  But these two, given the melodramatic names Romeo (Jérémie Elkaïm) and Juliette (Valérie Donzelli), star crossed lovers from the outset who lock eyes across a crowded room in a punk bar, never for one second feel authentically real, always pretending to be upbeat and happy, where their romance is accentuated by the frenzied string music of Vivaldi Antonio Vivaldi - The Four Seasons: Winter YouTube (8:19) before they discover the news, where the jolt of reality takes years before it finally hits them.
The film details every step along the way of the grim journey, including the initial medical procedures and surgery, which leads to an evolution from the less serious initial prognosis to the discovery of a rarer, more rapidly spreading kind of cancer, leading to revised doctor reports from more thorough tests, where breaking the news to the awaiting family with high hopes that gather after the initial operation is an exasperating expression of utter delusion, where the parents refuse to hear what the doctors are communicating and instead delude themselves and their entire families into believing a successful operation means a full recovery, but recovery time literally takes years, with follow up radiation and chemotherapy, where the child’s life is in danger the entire time, with only a 10% chance of recovery.  But instead of focusing on the truth, the young couple continues to lead their life as if nothing has changed, where they go out drinking and dancing and partying with their friends, visiting their son in the hospital during the day.  Eventually the economic reality takes its toll, with neither parent working, as they have to sell their home and move into the hospital wing which provides a bed for the parents.  There is little effort made by this film to come to terms with the harsh realities of cancer or death, where instead the parents put on a brave face as if nothing has happened, which hardly seems like an effective battle plan, yet it’s all dressed up in multiple music video segments which reflect a New Wave flourish, where the reckless parents continue to waste all their energy on themselves rather than save it for their child, drinking and partying until dawn, where the filmmakers fall in love with the idea of stylistic experimentation, which includes a split screen musical duet between the parents that superficially recalls Christophe Honoré, but without the novelistic detail and rich character development.
And therein lies the problem, as this is an example of a film that barely scratches the surface, that uses multiple narrations to describe the inner feelings of the lead characters instead of deeply expressive performances.  The entire cast fails to distinguish themselves, where they may have missed the boat by going for exaggerated comedic farce or lip synched musical numbers instead of drama, where at one point at a party the mother breaks into a French cancan, which is about as far removed from the subject at hand as one can get.  Lost in all the shuffle is any thought given to the kind of resolve needed to care for such a critically ill child should he survive, as no relatives or grandparents ever visit him at the hospital, which one would think would be an essential step towards a successful recovery, and no treatment plan is ever devised or shared by hospital staff.  Instead, all we see is the continued befuddlement of the parents who remain oblivious to the needs of their son, perhaps jotting down daily journals that were eventually used for the screenplay of this movie.  Who knows?  Suffice it to say, this is a comically enhanced, style over substance movie, as the heart of the matter, developing a relationship with impending death, continually gets short changed, often expressed by repetitious walks down empty hospital corridors, where it’s the daily monotony over time that eventually wears the couple down, sapping the energy out of their marriage, which eventually loses importance, something that is revealed in narration, almost as an afterthought.  The offhanded manner in which such significant personal details are revealed only distance the audience from these scarcely developed characters, whose inner lives remain a mystery even by the end of the film, leaving them complete strangers, yet they continue to be rendered as affectionate and captivating lovers onscreen, as if they visualize themselves forever lost inside a perfume commercial.
Posted by Robert Kennedy at 12:56 AM