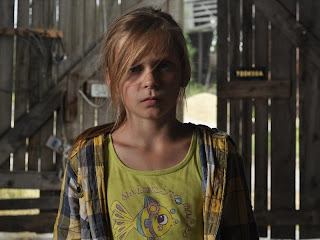 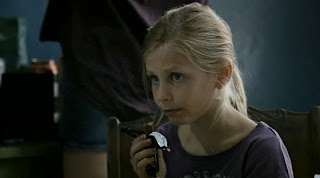 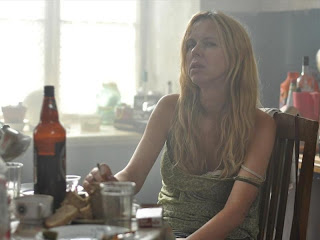 THE GRAVEYARD KEEPER’S DAUGHTER (Surnuaiavahi tütar)   D+
Estonia (100 mi)  2011  d:  Katrin Laur
Another wretched portrait of miserablist life in the post-Communist aftermath of Estonia, where without socialism to moderate the economic free fall of most poverty stricken families, especially in the rural areas, all that’s left are pathetic humans drenched in alcohol, where drinking is pretty much all they do.  Making matters worse are the conditions of the children, who are largely on their own raising themselves, making do as best they can while their parents are on all night benders, sleeping it off until midday.  Lucia (Kerttu-Killu Grenman) is a rambunctious hellraiser of a daughter who answers to no one, particularly not her teachers, through she voluntarily cares for Jats (Esther Koiv), a neighbor's Down-syndrome child who continually follows her around wherever she goes.  This picture of parental absenteeism is at the heart of the film, with a mother Maria (Maria Avdjushko) who’s blindly drunk most of the time and a father Kaido (Rain Simmul) who simply doesn’t wish to get involved.  While the picture is continually sympathetic to Lucia, allowing her to run free whenever she wants, answering to no rules of authority, basically eating candy bars for dinner, as she spends her entire life in a playful mode, never able to concentrate or get serious in school, where her grades are a disaster.  All the teachers look the other way, knowing the kind of trailer trash parents she has, until one orderly teacher (Eva Klemets) comes to the realization that it’s not in the child’s best interest to simply pass to the next grade without learning anything.  Complications ensue.
While the story is written by the director, what’s really a pretentious narrative device is the attempt to heighten the melodrama by continually showing what slobs and worthless creatures the parents are, who may as well be rolling around on the ground mired in mud, as if they live in a pig sty, as every single glimpse of them shows them to be horribly crude, backward, and drunken caricatures who are worse than pathetic.  So while the story may hold some social interest, what to do with the children of alcoholics in the post-Communist world of Eastern Europe where there are few jobs to be had, where if it were a realist Romanian film they’d be selling the children on the adoption black market, Laur’s storytelling borders on the pretentious, overdoing the downtrodden factor, making Lucia’s situation downright pathetic, then eliciting sympathy for her neglected and undernourished world through an almost fairy tale effect.  While it’s plainly spelled out that none of this is Lucia’s fault, little is revealed about her parents, making it impossible to understand how they arrived at such a wretched state.  Of course the audience is going to feel sympathy for a parentless child, but the larger family questions about how they remain so isolated and cut off from the rest of their own family and the community fabric remain unaddressed, making little effort to paint a more complete social dynamic, choosing instead to highlight the sorrowful nature of a poor child’s limitations.  Despite the interest by the teacher and the social welfare authorities, no intervention is indicated as no one has reportedly been hurt, but the family is under a continuing investigation.
In an out of the blue plot contrivance, Kaido is offered a week in Finland based on his gravedigger connections, something that is never explained or elaborated upon, making little sense to the uninitiated, but it offers the family a chance to overreact to the opportunity, where from her parent’s reaction Lucia assumes they’re moving permanently to Finland.  Once there, they discover fewer job opportunities than in Estonia, but also an ultra liberal female pastor (Ulla Reinikainen) who allows them to spend the week with her, giving Lucia a chance to see the world and broaden her horizons while her parents remain exactly the same, the one-dimensional horrible parents who would rather drink than spend time with their own daughter.  When it’s time to return home, the parents feel even worse than before, fatalistically seeing no way out, putting Lucia in rather desperate straights, especially when the welfare authorities start nosing around again.  Everyone here becomes the picture of societal blame, the parents, the neighbors, the teachers, the town welfare authorities, all somehow abandoning the best interests of the future generation, as if all are complicit in somehow denying this child a future.  But since there is little attempt to paint even the slightest picture of society’s presence other than as an authoritarian state, this is highly inaccurate conjecture and blatantly unfair, instead blurring the lines, as really what it comes down to is a resilient child who still has a future balanced against the hapless and defeatist parents who don’t really care.  Perhaps there’s a whole generation out there who have succumbed to alcohol addiction, a leftover Russian habit where currently 20% of male deaths are attributed to alcoholism, but this film fails to properly frame this as a societal issue or offer much insight into a progressively worsening social dilemma.
Posted by Robert Kennedy at 1:10 AM