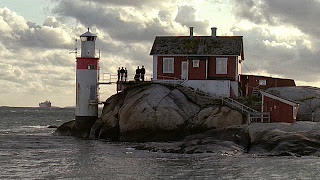 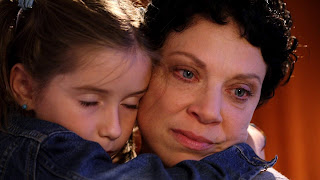 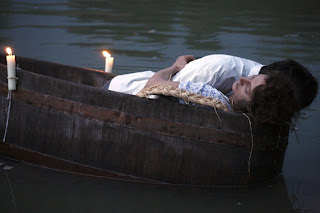 RETRACE (Visszatérés)              C-
Hungary  Romania  Sweden (98 mi)  2011  d:  Judit Elek          Official site [hu]
Both Hungarian and Romanian films have a consistent history of social realism, both during the Communist and post-Communist eras, usually bleak in nature without a trace of sentimentality, where truths are revealed through an unsparing depiction of reality.  That’s simply not the case here, in a dreadful stylistic misstep, as this is simply wretched filmmaking, featuring some of the worst acting on record, where the director is from the old guard Communist era of the 50’s and utilizes the heavy-handed, old-fashioned propaganda style of filmmaking, not just force-feeding the story, but browbeating the audience with what the director feels are the pertinent Holocaust and totalitarian unpleasantries she wishes to dispense.  While part of the problem may be the demands to speak multiple languages, especially the child actors, this is an overreaching and sadly melodramatic Holocaust memory tale that blends the present with the past, where the dreadful quality of filmmaking only undermines the director’s intent.  While there may be an interest in the story being told, an adaptation of two stories, Summer Night by Marguerite Duras and Winged Horses by Miklós Mészöly, the blatant stereotypical depiction of humanity simply isn’t very sophisticated and takes the audience back behind the Iron Curtain to find films that resemble this one.  Apparently growing up under a totalitarian regime leaves one desensitized and without much sense of empathy, as evidenced from a quick check of the director Judit Elek on IMDb:  For the purposes of the movie Tutajosok (1990), 14 sheep were spread with flammable substance, and then to the order by Judit Elek were burned alive.  69 scientists from the Jagiellonian University demanded that the authorities forbid Judit Elek entry to Poland.  Scientists wrote, “No director knowing his own worth would debase himself by using so primitive and cruel methods.”
While the film is a joint effort, supposedly 70% Hungarian and 30% Romanian, it opens on location in Sweden with an unusual Jewish funeral service at sea, which sets off a chain reaction, where Katherine (Kathleen Gati), of Hungarian origin, who escaped to Sweden as a child to escape the Holocaust, can be seen early on still traumatized by nightmarish Holocaust dreams and decides to return to her birth site with her family.  What was Hungary has since been declared part of Romania after the war.  Set in 1980 when the Soviet Union still prevailed, a rural Romanian village is under police lockdown pending an anticipated arrival of President Nicolae Ceauşescu who often comes here on hunting trips, where local families must make arrangements to guarantee his trip is successful.  Openly bitter about the prospects of serving a man like Ceauşescu, a brutally oppressive dictator, Sándor (András Demeter) and his wife argue about bearing children, as Sándor refuses to bring a child into the world “for them,” a reference to the cruel, iron fisted dictatorship of the current leaders of Romania.  A horrible family tragedy occurs on the arrival of Ceauşescu’s visit, but one Sándor refuses to share with the world, maintaining his privacy throughout even as his name becomes fodder for the rumor mill, named a prominent suspect in a recently unsolved crime.  Meanwhile, as Katherine and her family sit idly in their car at a border checkpoint, once more at the mercy of Gestapo like guards, she is awash with memories of her childhood, shown in black and white, where Sándor was her closest friend.  She also recalls the street lined with Jews, all stuffed into railway cars, where the only reason she was saved was because she was small enough to fit through a hole in one of the railcars.
Of course, she is racked with guilt for having survived when others didn’t, and has a history of suicide attempts.  As her family travels deeper into Romania, they encounter the police-state presence surrounding Ceauşescu’s visit, which parallels the world she left behind as a child.  While Katherine is pleased she remembers bits and pieces of the Hungarian language, the frightful aspect of her past is reliving itself in the present, where hotel guests are lined up on the floors in hallways making way for the potential visit of the President.  The only way out of town is through bribery, but she’s able to find her family home and a few of the people from her past.  What’s frightfully evident is that the police state she left behind as a child is still painfully present under the Ceauşescu regime, where strong-armed intimidation tactics towards ordinary citizens are the norm, leaving everyone vulnerable, as anyone can get arrested simply for the manner in which they answer police questions.  The problem here is that Elek is just as heavy handed in telling her story, continuously maximizing the melodrama, ramping up the egregious nature of the bad guys, where subtlety is obviously not her strong suit.  The picture she paints of both Romania and Hungary are so stereotypical black and white that whatever truths she’s attempting to convey get lost in the stylistically superficial depiction, as her sense of character throughout is highly exaggerated.  Anyone familiar with SHOAH (1985) doesn’t need another lecture on the anti-Semitic attitudes still prevalent today in the geographic regions responsible for sending Jews to the gas chambers, where the blatant racism from the Nazi’s still prevails.  The same could be said for the Fascist measures used by the ruling police states of the region, where Hungary and Romania serviced Hitler’s Final Solution, and neither nation has ever come to terms with their own historic complicity in eradicating Jews.
Posted by Robert Kennedy at 1:24 AM