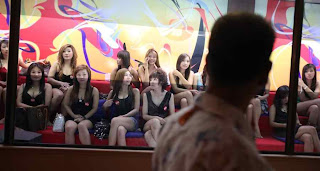 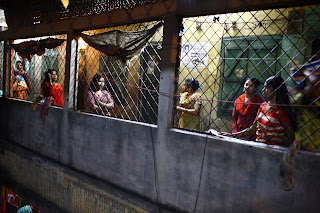 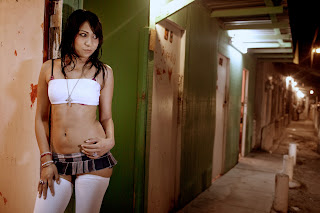 WHORE’S GLORY                B
Austria  Germany  (110 mi)  2012  d:  Michael Glawogger
A continuation of Glawogger’s documentation of the world’s most exploited workers stuck in the worst jobs imaginable across the globe, beginning with MEGACITIES (1998) and WORKINGMAN’S DEATH (2005), which mostly feature the hazardous and backbreaking work men are forced to endure for a paycheck, while this film highlights the debasing experience of women forced to sell themselves into prostitution, examining sex workers and their clients.   Divided into three parts, the opening section is called The Fish Bowl in Bangkok, Thailand, an upscale club where women get dressed up showing plenty of legs and cleavage and sit behind a glass enclosure, much like a fish bowl, where each have an easily identifiable number.  As customers order drinks and sit in a bleacher section across from them, they can compare girls and choose which one most interests them for sexual favors, where the level of service has an escalating pay scale.  There is a greeting host that asks each customer what they’re interested in and makes recommendations of several girls that meet the requested criteria, eventually calling out the requested girls numbers, where the couples retreat to hotel rooms.  Some are obviously more popular than others, while some unfortunately sit there all day without ever getting called once.  The ages vary from young teens who claim they are 19 to women pushing 40, where they spend a good deal of time each day in preparation for what amounts to a public beauty competition.  Interviewing both the customers and the girls, the customers offer a fairly superficial view of why they’re there, as many are married, but these girls offer a different kind of youthful beauty than what awaits them at home.  There are no illusions here, as the girls consider this just a job, where many end up spending all their earnings at a male sex club picking up guys, while a lingering shot outside the club shows a pack of street dogs humping one another.
The second section is in one of the poorest sections of the world, Faridpur, Bangladesh, where one young man indicated the need for women in the sex trade was an essential public service, as otherwise men would be raping women on the streets and having sex with cattle and goats.  Certainly one of the seediest sections of the world, narrow walkways allow men to enter and inspect the merchandise, where the girls try to pull the men inside their doors, literally fighting with one another for customers, each trying to argue they got him first.  As they interview the girls, it’s fairly typical to service ten men a day, where being treated nice is not always the norm, where the worst examples of raving lunacy are the brothel owners who subject their girls to the most humiliating tongue-lashings imaginable, saying they’re nothing special, that whore’s are a dime a dozen, that many are ugly and a waste of her time, as she could be feeding and dressing more attractive girls that will bring in more money, literally offering a full blown onslaught against their worthless character, all yelled at the top of their lungs.  This is considered acceptable business standards, where the proprietor literally buys new girls, often pre-teens, then offers them little hope for even the slightest hint of happiness, using them like sex slaves.  Perhaps the most poetic thoughts in the entire film come from a girl dressed in colorful religious garb, who asks why women have to submit themselves to so much demeaning behavior in their path for survival?  Complaining of a dreary monotony of continual personal degradation, she wonders how God could allow this and if there is any other path?

The final section is in Reynosa, Mexico, in a desolate, unpaved street called La Zona, where trucks and other vehicles drive up and down the pot-holed filled street and check out the merchandise lined up in tiny rooms along each side of the street, where they stand in the doorway in scantily clad attire trying to flag someone down.  These are perhaps the most vulgar women of all, whose crude language couldn’t be fouler, especially their description of men, where everything is seen in the most unflattering light.  Several of the men in pick up trucks reveal these women let them do things their wives and girlfriends refuse to do, so they come here regularly for a drunken sexual escapade.  There’s a peculiar scene where a musical band down the street plays church music, supposedly ridding the neighborhood of evil spirits.  This religious aspect is common throughout, where the selected women and their customers offer a ritualistic Buddhist bow, where they light incense and pray before they go to work, while in an Islamic country they don’t provide oral sex, refusing to use the same mouths that pray to Allah for sex acts, and in Mexico they pray to a Lady Death to release them from such misery, where they have death skulls in their rooms, which are religious icons that represent the Hell from which they have no escape.  There is talk of pimps going through the villages picking up naïve girls, selling them into the sex trade where they succumb to the controlling brutality of life as a sex slave.  The raw, unsentimentalized depictions shot on 16 mm by Wolfgang Thaler are graphic enough, but Glawogger’s beautifully edited films are disturbingly realistic and harshly true, using stark imagery that captures the soulless feel of sex as a business transaction.  Underlying many of the scenes are equally unsettling musical pieces by Bjork, Antony & The Johnsons, P.J. Harvey, CocoRosie “Beautiful BoyZ” Cocorosie - Beautiful BoyZ - YouTube (4:34), and Maike Rosa Vogel and Konstantin Gropper singing “Where We Meet”  Where we meet (whores' glory poem) Maike Rosa ...  YouTube (4:38), some unusual musical choices that offer a sublime, melancholic feel.
Posted by Robert Kennedy at 1:12 AM