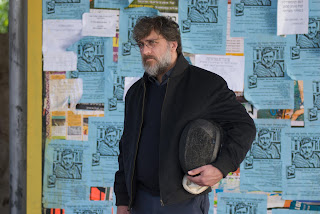 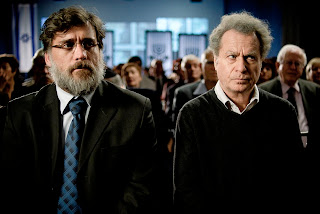 FOOTNOTE (Hearat Shulayim)           B
Israel  (105 mi)  2011  ‘Scope  d:  Joseph Cedar
Winner of the Best Screenplay at Cannes, this is a lightheartedly complex and wryly satiric look at the textual analysis of the Hebrew Talmud, a belly slapper of a subject if ever there was one, turned into an exposé of a dysfunctional patriarchal Jewish family.  Using a somewhat mocking tone, especially the exaggerated, oompah pah circus music of Amit Poznansky, and title cards as subject headers, like “The Worst Day of Professor Schkolnik's Life,” the film quickly delves into a scholarly subject, where Professor Eliezer Shkolnik (Shlomo Bar-Aba) is seen as a painstakingly fastidious scholar of Hebrew text, examining history word by word, looking for patterns of variance at odds with current understandings.  Making this his life’s work, he spends 30 years trying to piece together missing pieces of an ancient Talmudic text, sacrificing time with his family and spending every waking minute in the dank basements of historical libraries, painting a portrait of a joyless and compulsive man with obsessive routines, something of a perfectionist with a superiority complex whose glory is stolen right out from under him by a fellow academic colleague, Professor Yehuda Grossman (Micah Lewensohn), who finds a copy of the actual missing text and publishes it a month before Eliezer, all but making his efforts outdated and unnecessary.  But this is not his worst day, instead it is the day his son Uriel Shkolnik (Lior Ashkenazi), also a professor of Talmudic studies at the Hebrew University in Jerusalem, is honored by being invited to join the Academy, an honor the father has never received, creating an intense rivalry between the two.  The father belittles his son’s accomplishments, despite publishing several books, believing he’s not a real scholar, as Uriel is much more popularly accepted in the world of academia than his father, who is seen as something of an outdated dinosaur.
Nonetheless, Uriel is an ardent defender of his father, something that is put to the test in the titled sequence “The Happiest Day of Professor Schkolnik's Life.”  After being bypassed for twenty years, Eliezer receives notification that he’s won a prestigious award, the Israel Prize, for his lifelong dedication to scholarly integrity.  However it is Uriel that is called into an emergency meeting at the Ministry of Education, a faceless yet formidable building that could just as easily be Stasi headquarters, protected by ridiculously excessive security measures, where Uriel meets with distinguished officials in a tiny committee room that resembles the Marx Brothers cramming an absurd number of guests into a tiny ship stateroom from A NIGHT AT THE OPERA (1935), Ordering Dinner and Crowded Cabin Scenes - YouTube (4:03).  This comical farce reveals the heart of the matter, as Professor Grossman heads the selection committee, but he informs the son of an egregious committee error, as they wrongly notified the father instead of the son, who the award is meant for, mixing up their names as both are professors at the same institution.  The committee intends to set matters straight, with the help of the son, but Uriel believes this could ruin the already stressed relationship with his father.  More misadventures ensue, as this is a scathing indictment of what passes for historical accuracy, placing the entire Jewish history in question if interpretation hangs on the literal meaning of certain words or phrases from ancient texts that have remained unquestioned truths for centuries.
The whole picture of authority here is a fragile house of cards that come tumbling down with the slightest bit of ill wind.  Cedar mocks the arrogance of self-righteous authority on every level, including police, academic, political, governmental, religious, and even family, where the handed down patriarchal authority has a troubling history, one that does not openly accept criticism or changing opinion.  This hypocritical narrow-mindedness is the centerpiece of the film, and a challenge to the Israeli culture, but the director refuses to take real aim at seriously influential targets, leaving this instead vague and allegorical.  While the film is intelligent, occasionally veering towards farce, and is competently made, there’s nothing of cinematic note and is a story largely advanced through a dialog-driven narrative, giving this the feel of a meticulously detailed short story.  While this may remind viewers of the Coen Brothers’ irreverent take on American Judaism in A SERIOUS MAN (2009), this film doesn’t just poke fun, but points out possible historical inconsistencies with the development surrounding a possibly misogynist Jewish state, as humans are fallible in their interpretation of Jewish law, which may have grown more militarily aggressive as a matter of convenience due to recent political realities.  While the film points out inconsistencies in analyzing and ultimately rendering judgment in morally complicated issues, it also suggests a flawed and inherent sadness within the patriarchal system itself, where resentments, grudges, and human fallibility may be passed down from generation to generation, where it’s unlikely what passes for elderly wisdom will be challenged any day soon.  Of note, Cedar's own father is a biochemist at the Hebrew University who also studied the Talmud and received the Israel Prize in biology.
Posted by Robert Kennedy at 7:14 PM