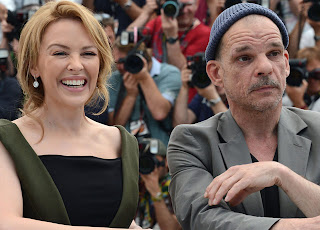 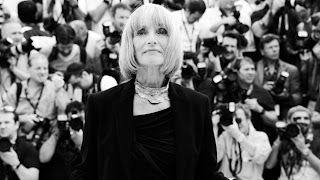 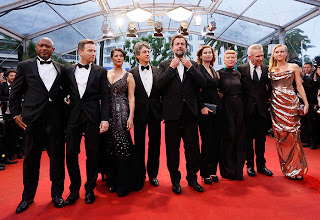 From left to right, Raoul Peck, Haitian filmmaker, Ewan McGregor, Scottish actor, Hiam Abbass, Palestinian actress and director, Alexander Payne, American filmmaker, Nanni Moretti, Jury President and Italian filmmaker, Emmanuelle Devos, French actress, Andrea Arnold, British filmmaker, Jean Paul Gaultier, French fashion designer, and Diane Kruger, German actress
Now that the NATO outrage has passed, how about outrage about how Wall Street may have ruined Facebook, from Heidi Moore at The Guardian:
http://www.guardian.co.uk/commentisfree/cifamerica/2012/may/23/facebook-ipo-debacle-greed-hubris-incompetence
Facebook's IPO debacle: greed, hubris, incompetence …
And perhaps worse: if Facebook had set out to showcase a car-crash of an IPO, it could not have done it better
It is three trading days after Facebook went public, and we now know that the IPO will live forever in the history books – just not in the way anyone had planned. Had Facebook openly set out to sabotage its own IPO, it could not have invented a better or more remarkable debacle: a tale of financial chaos fit for history books.
Facebook stock has lost 20% of its value in only three days. In that alone, it is not remarkable. Large IPOs rarely perform well just after going public. Fund manager Och-Ziff, for instance, fell 24% in its first week as a public company. (And thereafter: Och-Ziff went public in 2007 at $32 a share, and now trades at just over $7).
No, what makes Facebook stand out is that, at nearly every junction where wisdom, care and moderation ought to have intervened, they did not. In law enforcement, this is called a "smash and grab" – just knocking out the windows and taking everything in sight. On Wall Street, the disregard of the IPO for normal investors brought up a vulgar old traders' saying: "Pigs get slaughtered." Translation: greed gets punished.
As far as autopsies go, this is a complicated one, from the spiritual to the mechanical.
There was gracelessness: Mark Zuckerberg, Facebook's CEO, made it clear for months that he disdained the company's IPO, and deigned to show up to only one meeting with potential investors. That couldn't have done much to convince those investors to believe that Facebook took the Wall Street system seriously enough to give them a good return on their investment.
There was greed: executives and insiders made the IPO primarily a way to enrich their own fortunes – rather than the company's – and their stock dump accounted for 57% of the shares sold in the offering (reinforcing the old joke that "IPO" stands not for "initial public offering", but "insider profit opportunity"). To pour more money in the pockets of these insiders and the company coffers, Morgan Stanley, the lead underwriter, hiked the price the company was charging investors – $38 – and flooded the market with tens of millions of extra shares. (The investment bank then had to rush back into the market and buy millions of those shares to artificially support the price of the stock on the first day.)
Pricing an IPO correctly – to predict, in essence, its fair market price – is a delicate art, which is supposed to balance how much investors may like a company with how much they're willing to pay for it. For instance, you might buy your favorite cereal at $5 a box; but would you buy it at $20 a box? Probably not. You don't like the cereal any less; you just don't think it's worth that large a chunk of your budget for groceries. People love Apple enough to pay $400 a share for it. But if Apple were valued the same way as Facebook, each Apple share would be worth more than $3,000.
There was hubris: throughout the process, Facebook made it clear that the company believed it was different from other companies. It could straightfacedly value itself at $104bn even though it had just $3.7bn in revenues, for instance. It angled for the title of the "the People's IPO" and promised that one-fourth of the shares sold would go to regular mom-and-pop investors – even though the putative "people" would be buying overpriced shares from insiders eager to cash out. JP Morgan, one of the bank's underwriters, added to the hype by slapping Facebook logos all over its headquarters like a school girl doodling the class hunk's name into a notebook.

Karina Longworth at LA Weekly:
http://blogs.laweekly.com/arts/cannes-film-festival/
Cannes Fest at Time Out London:
http://www.timeout.com/london/feature/2542/cannes-film-festival-2012
Cannes Diary from Film Comment:
http://www.filmlinc.com/blog/cannes
The Guardian Cannes commentary:
http://www.guardian.co.uk/film/cannesfilmfestival
And, of course, George is back at Cannes this year, where he finds off the beaten track film fare:
http://georgethecyclist.blogspot.com
The films continue to come in pairs--yesterday two on trash, today two Belgian road movies.  One was a last minute market addition that I wouldn't have known about if I had found Ralph in the 60th Theater for the "On the Road" morning screening.  He was 30 people ahead of me in line, having arrived at 7:30 to be the first so he wouldn't have to contend with line budgers and the subtle positioning that goes on while everyone is waiting to be let in.  I prefer an extra half hour of sleep, trying to get six hours.

There was a several minute gap between the time Ralph was let into the theater and I, as it was filling fast with press spill-over that had priority over us.  It was down to letting us second class citizens into the theater in increments.  Ralph and I always sit in the upper left hand corner of the theater for a quick exit, but I didn't spot him when I entered as the theater was nearly full and he missed seeing me.  So rather than having a debriefing while we waited for "On the Road" to start I was able to read "Screen" magazine and discovered "Topedo."  Its brief synopsis described it as a 35-year old guy, whose life is in disarray, wins a dinner with Eddie Merckx.    All of a sudden "Torpedo" replaced "On the Road" as my most anticipated movie of the day.

And after the disappointment of "On the Road"  I knew it could be the best movie of the day as well.  I've read everything Jack Kerouac has written and many other books on the Beats and have lived the life and know all the characters well.  Walter Salles has been working on this movie for years but he fell way short of capturing the manic energy of Neal Cassady that drew Kerouac and many others to him.  Kerouac writes of their benzedrine-fueled conversations that went on and on as they drove through the night thriving on the joy of being on the road and free of the constraints of society pontificating on the main stream life they detested.

There was none of that here. Kerouac sought out mad characters and the madness in life. And he succeeded, though Salles did not. This was a most drab portrayal of their lives.  It was almost as if Salles was at pains to demystify the Beats and not to provide them as characters to emulate or admire.  Sean Penn much better portrayed the zest of being free and on the road living all sorts of different experiences in "In the Wild" than this did.  Kerouac was a writer seeking experience and continually jotting notes.  He had to be thrilled to be living the life he was, collecting material and meeting up with Cassady and many of his friends.

When the representative of "Torpedo" handing out a flyer of the film to the eight or nine of us in attendance I asked him if Eddie Merckx was in the film.  His English wasn't good enough to understand my question.  I was happy to see in the opening credits that Merckx was given thanks for his participation and he is seen early on at a furniture store that is conducting the contest to win a dinner with Merckx.  There is a catch to winning it though and the guy who thinks he has won the dinner is denied his dinner.  He was so much looking forward to it goes to extremes to get it, kidnapping the store owner and driving across the country to Merckx's next appearance.  He also has to enlist the help of a former girl friend to pose as his wife and grabs a ten-year old neighbor to be his son.  When the kid tells him he doesn't know who Eddie Merckx is he says he ought to be arrested. Ample homage is paid to Merckx throughout this comedy to qualify it as a bicycle movie even though  the only bicycling is teaching the ten-year old how to ride a bike.

The other Belgian road movie was two hitch-hikers who link up.  One is a mysterious young woman with blank eerie eyes who admits she has recently been released from "a loony bin."  The other is an aspiring actor who is captivated by her even though he has a pregnant girl friend.  She leads him into all sorts of mischief.  She is a very unsettling character.  He tails her for  awhile and then she turns the tables and tails him back to his girl friend.

"Hold Back," a most realistic French film about Algerians and blacks in Paris and racial stereotypes, also had unsettling characters that had been fully wondering "what next."  The movie opens with a black man proposes to an Algerian woman.  No one in their families is in favor of their marriage, though none of the family members have met either of them.  The Algerian has many brothers.  They are so upset a friend offers to kill the black. I saw this because I was turned from "7 Days in Havana" a movie I much wanted to see as Gaspar Noe was one of the seven directors who contributed an episode, I was very glad to have seen "Hold Back."

The most entertaining movie of the day was Ken Loach's "The Angel's Share," an almost whimsical tale of English working class blokes in trouble with the law who pull off an incredible heist of some whiskey worth a million pounds.  There was some grim darkness to this, a subject  Loach can not avoid, but it was largely an enjoyable fairy tale that offers hope for humanity rather than the usual despair that Loach dishes up for the human condition.

"Journal de France"was another movie I was greatly looking forward to as it was described as the photographs of six years of travel around France by noted French director Raymond Depardon.  That was only an incidental part of the movie, as it was mostly a retrospective of his decades of documentaries of trouble spots around the world, mostly in Africa.  They included an interview with a French woman who was held hostage for a couple of years while she was being held, an interview that got him in trouble with the authorities.  There was also 60 seconds of silence from Nelson Mandela shortly after he was released from prison.  There were only a handful of set shots of small town France and several short segments of driving on winding rural roads that I know so well.
Posted by Robert Kennedy at 11:04 AM

Email ThisBlogThis!Share to TwitterShare to FacebookShare to Pinterest
Labels: Cannes 2012, George the Cyclist