The House of Yes 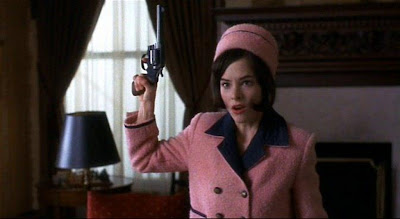 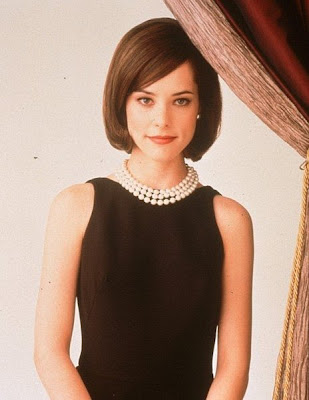 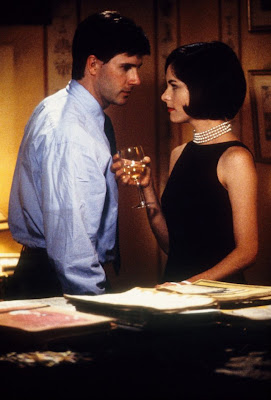 A wacky, outrageously acerbic black comedy with Genevieve Bujold as the matriarch over an extraordinarily dysfunctional family, uttering lines like “conversation only leads to trouble,” adapted from Wendy MacLeod’s play We Are Living in a House of Yes, though perhaps loosely based upon Edgar Allen Poe’s The Fall of the House of Usher, as this is basically a Gothic haunted house story, where all the inhabitants are forever tainted by family secrets, not the least of which includes ongoing incestual relations between a twin brother Marty (Josh Hamilton) and his sister Jackie (Parker Posey) playing JFK and Jackie-O, both obsessed with the Kennedy family since their father walked out on the day of JFK's assassination, where their mother reminds us “Jackie was holding Marty's penis when they came out of the womb.  The doctors swore to me it’s in some medical journal somewhere.”  The brilliant Parker Posey shines in her role as the recently de-institutionalized, still mentally unstable sister who becomes completely obsessed as Jackie-O, right down to wearing a string of pearls around her neck, the pink Chanel suit along with the pillbox hat that the First Lady was wearing when JFK was shot and killed in Dallas.  Played by a younger actress (Rachael Leigh Cook) as Jackie at age 14, the film opens with iconic, interchangeable images The House of Yes - Young Jackie-O Tour Videos. - YouTube (4:57) over the opening credits of Jackie-O (in color) showing off her stately home and the real Jacquelyn Kennedy (in Black and White) leading a televised guided tour of the White House A Tour of the White House with Mrs. John F. Kennedy - YouTube (57:37), which aired on CBS to enormous TV ratings on February 14, 1962, though here it resembles parody.  The film makes no bones about its air of pretension, becoming a savagely dark, dialogue-laced, screwball comedy where Posey literally steals the show, as the audience can’t take their eyes off her every moment she’s onscreen, as she’s utterly captivating in a delightfully sick and macabre kind of way, perhaps the defining role of her career.

The terrific, sarcastically biting dialogue intermixes overdramatic yet stinging remarks with a weird hilarity, maintaining a frenetic pace over the course of 24 hours on a dark and stormy Thanksgiving Day, where a torrent of rain sets the tone for interior, claustrophobic fun and games, especially when the power goes off and the darkness is lit only by candlelight, luminously shot by Michael Stiller.  The characters themselves couldn’t be more memorable, as the acting is outstanding, each playing off the other with surprising skill, where there is more quotable dialogue here than virtually any other film of its era, a movie that plays well to repeated viewings, set in 1983 in an enormously empty Virginian mansion during the Reagan years, a last gasp of aristocracy where the world of privilege is a given, as they know no other way, a place with no rules, where Jackie is defined as a person who can’t take no for an answer, where the film title came from bathroom wall graffiti seen by the director:  “We are living in a house of yes.”  According to her mother, if there’s anything she knows and understands, it’s that “Jackie and Marty belong to each other.”  So when Marty arrives home from college with his fiancée Lesly (Tori Spelling), her presence sends the house into turmoil, as they’ve never had a guest before, wonderfully expressed in a flurry of Marx Brothers style dialogue seen here:  House of Yes - YouTube (1:49).  Other than Marty, the inhabitants, including the ever inquisitive younger brother Anthony (Freddie Prinze Jr.), are all shut-ins who rarely if ever venture to the outside world, preferring the comforts of home, where like Poe’s story, the house itself seems filled with the secret mysteries of its own family history, where nothing normal ever happens, perhaps best expressed by the mother who brazenly tells her children “I look at you people and wonder, how did you ever fit in my womb?”

Posey’s manic edge couldn’t be more brilliantly original, but Bujold is the anchor of the family, where the two get all the best lines, where Bujold’s understatement perfectly contrasts with Posey’s frenetic energy.  The question is whether any of the family’s secrets will be revealed, whether Marty will be allowed to run away with the perfectly ordinary Lesly and lead some semblance of a normal life, or whether the house of horrors will somehow manage to take its toll on the inhabitants.  Jackie is always walking on eggshells, reminiscent of the outrageous and highly exaggerated restraint required in Guy Maddin’s CAREFUL (1992), where people speak in whispers lest they be overcome by a looming avalanche, where anything can potentially trigger her violent tendencies, where the quick and abrupt mood changes are startlingly effective, always matched by the music of Rolfe Kent, beautifully expressed in a scene where Marty and Lesly play chopsticks on the piano together, until Jackie butts in and the brother and sister team play an astoundingly difficult four-hand piano concerto that immediately drives Lesly out of the picture, eventually breaking into free form jazz that opens the door to a few family secrets:  The House of Yes --- Big Reveal --- SPOILERS - YouTube  (3:51).  While the emotions displayed onscreen are surprisingly real, never resorting to the artificiality of camp, this is a film about revealing emotional truths, however twisted they may be, like jealousy, love, shame, obsession, humiliation, disbelief, or possessiveness, where the non-naturalistic manner in which they’re expressed is part of the film’s free-wheeling charm, as this allows Parker’s wonderfully over-the-top performance, “But I’m not crazy now, I’m better.  I watch soap operas, I bake brownies, normalcy is coursing through my veins,” but also lends itself to the unthinkable, such as Marty and Jackie-O lovingly reenacting the Kennedy assassination as foreplay.  This is a surprisingly demented American version of THE RULES OF THE GAME (1939), lured by indulgence and the self-centered spell of the Me Generation, thinking the love you want to believe in is strong enough to lift you outside societal norms, not just above conventionality, but also morality, where in fact anything goes.  To get lost in this delusional rhapsodic flight is like Icarus flying too close to the sun.
Posted by Robert Kennedy at 9:49 AM