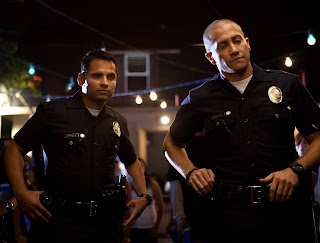 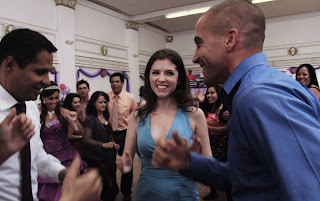 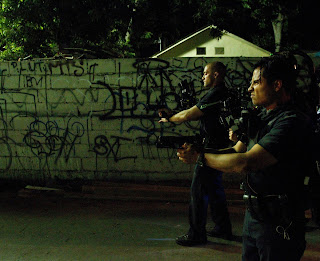 Television and the movie industry have been at odds ever since the widespread convenience of owning televisions in every American household became a reality in the 1950’s, where for literally decades television has been in a catch up mode following behind the latest technological and artistic advancements which separate the two mediums, but in the last decade, certainly since the advent of cable channels which don’t edit language, violence, or sexual content, television has actually been leading the way when it comes to the popularity of cops shows, consistently utilizing better scripts, actors, and quality of content.  While occasionally films rise to unprecedented heights, such as HEAT (1995), SE7EN (1995), LA CONFIDENTIAL (1997), THE DEPARTED (2006), or ZODIAC (2007), they are countered by The Sopranos (1999 – 2007), The Wire (2002 – 2008), The Shield (2002 – 2008), Dexter (2006 – present), or Southland (2009 – present), all of which in a dozen or so episodes annually play out like an extended mini-series, where the dramatic interest is sustained over a considerable length of time.  Certainly it is the substantial success of these shows that is pushing the development of this adrenaline-laced style of film, from the writer of TRAINING DAY (2001) and THE FAST AND THE FURIOUS (2001), resorting to a Starsky and Hutch (1975 – 1979) portrait of likable cop partners, Brian Taylor (Jake Gyllenhaal) and Mike Zavala (Michael Peña), sent out in their squad cars on a daily basis to catch the bad guys, all set in the hyper-kinetic and crime-infested world of South Central Los Angeles.  It’s a gritty portrayal of cops on the beat, expressed through constant motion with quick edits, continuously frenetic hand-held camera movement and a machine-gun style of profanity-laced, rapid fire dialogue, often finding humor in the ridiculous predicaments they get themselves into, where they specialize in patrolling the worst ghetto neighborhoods.  If much of this feels contrived, like the lawlessness of the Wild West, it attempts to use the pervasive presence of violence to amp up the tension, creating a poisonous atmosphere of gangbangers, malicious killers on the loose, and even the drug cartels from the Mexican underworld, as unlike the daily grind of real cops where the routine can become suffocating, much of it spent in the mindless task of filling out paperwork, these are cocky gunslingers looking for action, where every hour of every day is spent seeking out new adventures.

Gyllenhaal and Peña work extremely well together, where you get a good sense of increasingly developing interior character, as both can be goofballs often playing pranks on their fellow cops, where their swaggering attitude differentiates them from other teams of partners, often singled out for their efforts in the field by their more hardened commanding officer Frank Grillo, bringing a military SWAT team style to their everyday practice of policework.  This two man tandem have a reckless feel about them, where they’re still young and just starting out, where their confrontational practice of rubbing elbows and getting in-your-face with notorious outlaws and gangsters seems too edgy, likely not the practice of officers with longevity on the force who exercise more restraint.  These guys come off as Reality TV cops, each with cameras pinned to their vests watching every move they make, where Gyllenhaal in particular is always talking to his camera in man-on-the-street interviews or pointing it in someone’s face, where what’s on the screen often parallels this raw police footage, often feeling unedited and rough-edged, a cop cam providing a stream-of-conscious viewpoint.  In typical Hollywood vernacular, the bad guys are given picturesque names that describe their personalities like Big Evil (Maurice Compte), Wicked (Diamonique), or Tre (Cle Shaheed Sloan), the latter a hot-headed, two-time felon who prefers taking the risk of standing up to cops rather than backing down, actually going toe-to-toe with the shorter, but more bulldog-like Mike (without badge and weapons), which actually earns his respect, where fighting cops barehanded, win or lose, is “gangsta.”  And therein lies the problem here, as the film is more interested in establishing visceral, in-your-face action sequences than delving into the mysteries or social dynamic of this deeply entrenched, poverty stricken world around them, though Tre does express his concern that black neighborhood gangs are being pushed out by Hispanic gangs.  This movie elevates cops to the status of sheriffs in the Wild West, always seen as noble heroes, where the moral line is never crossed or in question, as people are instead good guys or bad guys.  Unlike BOYZ N THE HOOD (1991), for example, the audience learns absolutely nothing about growing up in the South Central neighborhood where every day is a moral dilemma.

The film has a token use of women, where the one-dimensional Anna Kendrick is Brian’s girl, whose best scene is a PULP FICTION (1994) dance tribute, while Natalie Martinez as Mike’s wife has a fiercer attitude, where they are written into the script as a softer counterbalance to the feverish intensity of the streets where these guys are close to action figures.  Overly reverential towards the police, giving them a stature in the community they don’t deserve, as LA cops are notoriously abusive and corrupt, this film never questions their moral actions or duties, giving instead a fairly adolescent and somewhat fantasy view of what it is to be a cop.  So it’s the script, written by the director who spent his teenage years in South Central, that ultimately falls short, failing to connect gangsters and drug lords to the world from which they came, instead exploiting their nastiness as hideously murderous and grotesque, often making them larger than life foul caricatures, even as several of the gangsters onscreen are played by actual LA gangbangers.  The near screwball comic timing of these two knuckleheads in the patrol car can be outrageously funny, accentuating their close rapport throughout, often making fun of each other’s distinctively different white and Mexican cultures, as it’s their personalities that really carry the picture, along with a few of the gangsters, especially Tre and Big Evil. The director maintains a fluid and kinetic flow throughout, turning much of this into an exhilarating thrill ride, but that’s hardly the life of a real cop, as these two prima donnas flaunt their cowboy personas in the face of their fellow cops, not exactly endearing camaraderie or admiration.  The director also uses horror elements to accentuate fear, like walking into dark and empty corridors just waiting for something to jump out at them, where despite their arrogance, he uses these two officers as innocents walking into the lair of the beast, continually discovering something they haven’t anticipated.  While the film’s aesthetic is gripping and tense, where danger lurks around every corner, this is also a trigger happy exposé on how cops disregard humanity and destroy community relations while ironically spending a lot of talk about loyalty and heroism.  These guys are military style killing machines that routinely trample on the rights of others, busting in with guns flailing, continually pointing their guns in people’s faces, making threats, attempting to match the hostility of their adversaries, all of which represents a very short-sighted view of policework, much of which depends upon the cooperation of local residents, never once considering the long term harm of their actions, as inhabitants of any neighborhood, rich or poor, would soon loathe their disrespecting commando recklessness.
Posted by Robert Kennedy at 9:16 AM