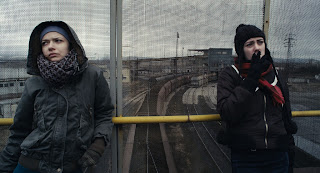 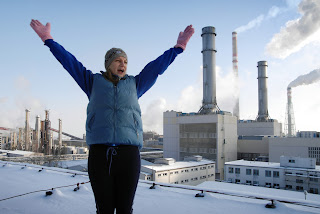 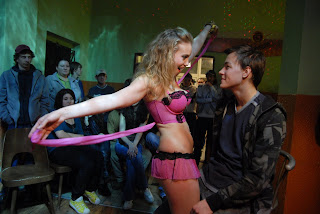 The short 3-word take on this film, according to a friend Kirk, is “snow, trains, bleak,” and indeed this post-Communist glimpse of life in the Czech Republic couldn’t be more gloomy and miserable, where the oppressive, anti-humanist feel is overwhelming, reminiscent of the János Szász Hungarian film WOYZECK (1994), an excellent film adaptation of the brilliant German playwright Georg Büchner’s 19th century play, a working man’s tragedy where in both films humans can find no salvation under social institutions or oppressive regimes, much of it set in the decaying remnants of an isolated, broken down train post where Jarda, Vladimír Javorský, works as a railway signalman, spending most of his time carefully building ships inside a bottle while splurging his earnings boozing and gambling every night, where he’s addicted to the slot machines in a local bar.  His wife Kamila, Malgorzata Pikus, is a railway cleaning lady, where they have two teenage children, Agáta, Marika Soposká, who is inseparable from her best friend Magda, Natalie Rehorova, and Honza, Miroslav Pánek, who hangs with a group of pot-smoking slackers.  There isn’t an unpretentious note anywhere in this film, but it has the unyielding bleakness of East European miserablism, set mostly in the constant winter snow, beautifully shot on film by Vladimír Smutný, much of it in crowded bar interiors, claustrophobic living rooms, or the dark of night.  No one in this film is spared, as all are up to their necks in trouble, where misfortune is the prevalent sign of the times, where early on we see one of Honza’s friends nearly freeze to death in a drunken stupor, permanently losing the loss of his legs.

Agáta is pregnant, but refuses to tell anyone, waiting for the right opportunity to spring it on the most unsuspecting, hoping that could be her ticket out of town, even if it means betraying some of her friends, while Honza’s buddies overindulge in drink, spending their time getting wasted, where he and a friend Cryil grow cannabis plants in the basement, where neither child works, has a cent to their name, or has any illusions about the future.  Kamila seems to have a secret yearning for her lost youth, as she and a large gathering of the town’s women put out a naked calendar to raise money for the 25th anniversary of the state-sponsored Spartakiada festival, a song and movement routine that reflects physical fitness, even though these are mostly older, out of shape, middle-aged women.  She befriends a Vietnamese couple selling food out of a truck on the street, where the wife joins in the dance training.  In stark contrast, the local bar hires a weekly stripper, Zuzana (Aneta Krejcíková), who takes it all off in a raucous interplay with the drunken customers, where Honza immediately falls madly in love, driven by the purest intentions of noble youth, which she finds amusing, but also green around the collar.  Honza persists, holding nothing back, literally losing his right mind, discovering the only way to save her is to buy her outright from her pimp, like stolen merchandise on the black market.  Jarda, meanwhile, becomes so uncontrollably over his head in debt, selling the deed to his home where his family will be evicted come spring.

When Jarda loses his job for missing work, he goes in a homeless tailspin, literally missing for days on end, riding trains day and night, where his family hasn’t a clue where he is, even as the Christmas holiday approaches.  The film is a series of interconnecting vignettes, each one filled with tragedies more dour than the next, but some are absurdly hilarious, where Honza literally buys Zuzana and brings her home to live with the family, while Agáta has announced her pregnancy, trying to pin it on one guy after another, but none fall for it, where family dysfunction reigns supreme, but the underlying tenderness expressed at Christmas is remarkably moving, making this a memorable holiday movie unlike any other you will likely experience.  The harshness of the world around them is inescapable, like any Béla Tarr film, or like a world of lost hopes.  The finale is a true pleasure, almost completely shot in darkness, where looming in the town’s background are industrial smokestacks spewing toxic smoke.  One of the real pleasures of this film is it screens on actual film, the only one out of 13 films seen so far at the Chicago Film Festival.  The film won 4 awards out of 10 nominations at the Czech Academy Awards, including Best Film, Best Director, Best Cinematography, and Best Actor (Vladimír Javorský) in the director’s first feature film effort.  In much the same vein as fellow Finnish miserablist Aki Kaurismäki, Juráský gets terrific performances overall and does an excellent job balancing bleak amusement with the hauntingly oppressive, dire economic circumstances.
Posted by Robert Kennedy at 10:31 AM