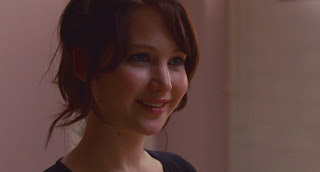 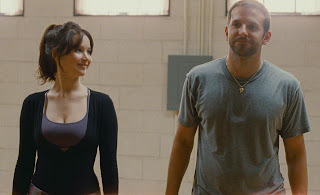 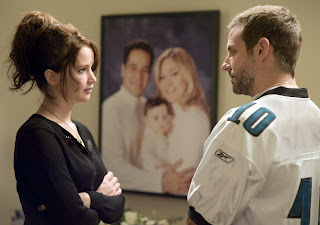 Winner of the People’s Choice Award at the Toronto Film Festival and the Audience Award at Austin, this is another candidate for the feel good movie of the year, where mainstream audiences will love the quirky romance with a happy ending, while cinephiles will love the originality of the characters and the honesty of the script, as this is a compelling story that uses contrivances like good luck charms, not afraid to make the most of oddball plot twists, with terrific performances, excellent musical choices and solid direction, where the ensemble cast shines throughout.  Nonetheless, initially this story only goes so far, something of a portrait of an eccentric, following the exploits of an excitable young man, Bradley Cooper as Pat, a guy that became unhinged when he saw his wife in the shower with another man, causing such a violent reaction that he placed himself under the mercy of the court with a plea bargain, losing his job, his house, and his wife, spending 8 months in a mental institution attempting to regroup before his mother finally brings him back home to his parents, Robert De Niro as Pat Sr. and Jacki Weaver as Dolores.  His father’s undergone a few recent changes of his own, losing his regular job and now runs a bookie operation, trying to raise money for his restaurant by taking bets on sports events, as he is a rabid Philadelphia Eagle fan, where Sunday afternoon’s in front of the TV watching an Eagle game is sacred territory, using a lucky handkerchief and any other black magic mojo he can think of to improve his odds.  Pat has other things on his mind after the hospital, and all he can think about is developing a positive mental attitude about his life in order to win his wife Nikki (Brea Bee) back, believing this is his silver lining, getting in shape and losing weight like she requested and changing his life for the better, while everyone else refuses to mention the obvious, that he’s had no contact with her since the hospitalization and she’s likely moved on without him.

Much like his father, Pat lives by his obsessions, much of it triggered however by his untreated bipolar mood swings, where he feels guilty about taking the psychotropic medicine, goes for long periods unmedicated hoping he can improve on his own, but inevitably suffers recurrent roadblocks, such as violating restraining orders, where he is simply unable to deal with his uncontrollable anger, beautifully juxtaposed with the mind-altering music of Led Zeppelin.  Adapting the material from Matthew Quick’s novel, the director has written a very clever script, as the quirky individuality of the character is often hilarious, especially the means by which he attempts to adapt to the real world, such as his angry discovery of Hemingway’s ending of The Sun Also Rises, where it’s more about social alienation than mental illness, where the director has to carefully straddle the line not to poke fun of people with serious mental health issues.  Russell’s stroke of genius is introducing Jennifer Lawrence as Tiffany, another person who’s gone through her own depression issues, having recently lost her husband to a senseless death, where the directness of their language together couldn’t be more refreshing, especially when talking about the reactions to various prescribed medications at a family dinner, where they’re like two peas in a pod, both seen as oddballs within their own families, but their heightened state of vulnerability gives their characters a unique perspective.  Having seen Lawrence now in three pictures, including 2010 Top Ten Films of the Year: #3 Winter's Bone (2010) and Like Crazy (2011), she has literally stolen all three movies with the exceptional nature of her performances, and here she simply *makes* the movie, which would be nowhere without her, picking up the pieces left behind by Pat’s distinctively unsettled life and continually maneuvering him into a better place, without him realizing it.  She brings the dramatic conflict of authentic language and stark emotion directly into the focus, tenderly accepting him with all his flaws intact even as Pat continues to dream of his perfect life with his wife Nikki.

There’s a nice contrast between the idealized and obsessive fantasy in Pat’s head and the supposed perfect marriage of Pat’s brother-in-law (John Ortiz) with ice princess Julia Stiles as Veronica, Nikki’s sister, where she’s equally obsessed that everything in her house has to be in proper order, adding additional pressure to their marriage, where missteps are simply not allowed.  At the same time, Pat’s father obsessively plays the numbers, betting his family’s livelihood on the outcomes, while Tiffany at times seems equally deluded about turning Pat’s life around, where she gets him to promise to be her dance partner in a heavily stylized ballroom dance contest which requires plenty of strenuous rehearsal time.  Perhaps the best sequence in the film is set to Bob Dylan & Johnny Cash - Girl From The North Country - YouTube (3:42), where the mixed moods of the two unique characters strangely and appealingly come together, as they do in the song.  A few trailer sequences are set to “Silver Lining (Crazy Bout You)” by Jessie J, Silver Linings Playbook Music Video (2012) - Bradley Cooper, Jennifer Lawrence Movie HD YouTube (2:39).  The beauty of Tiffany’s character is Jennifer Lawrence’s nuanced performance, showing extraordinary range in an Oscar touted performance, bringing sympathy to such a complicated and misunderstood life, always remaining true to her feminine nature by defying the easy road, continually doing the unexpected because that’s what’s required, as people are that complicated to deal with.  Adding to the mix are several side characters, like Chris Tucker as a fellow inmate from the hospital, perhaps Pat’s best friend in the movie, who tries to “blacken up” their dance moves, or Anupam Kher as Pat’s psychiatrist, who is also, inexplicably, another obsessed Eagle’s fan.  Yes, the contrivances are fast and furious, but here they hardly matter, as they’re beautifully integrated into the mysteriously jagged storyline which brings these two improbable characters into our lives and makes them worth caring about, turning this into a highly entertaining Christmas holiday classic, bringing the indie world of David. O. Russell into the mainstream, providing comic inspiration with plenty of internalized soul searching, where it’s all about spending Sunday afternoons with the family, with Mom in the kitchen fixing crab fries and Dad sweating out the point spread.
Posted by Robert Kennedy at 6:00 AM