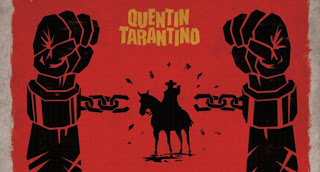 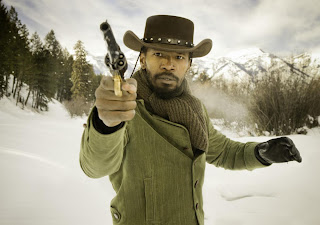 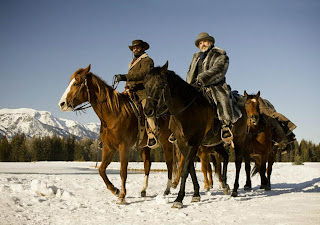 Slavery as entertainment?—It is in Quentin Tarantino’s world, where next to nothing about slavery is learned by watching this film.

In matters of racial understanding, historical or otherwise, it’s a curious thing about fantasy, as it doesn’t really fit anywhere, but exists in a netherworld all its own.  Some may take delight in the imaginings of male revenge fantasies where women are mere afterthoughts, while others will wonder what’s the point of bringing a comic book, super hero sensibility to matters of actual American history?  Do we really need, as an example, a heroic Abraham Lincoln riding a thunderous horse through the rebel lines killing Confederates at Gettysburg bringing victory to the Union, or a Southern version where the Confederacy is victorious?  As these events never actually happened, one might question the purpose of anyone presenting movies in such a manner.  And so it is with slave fantasies that exist outside historical reality, where one wonders who gains from this perspective, or simply what’s the point?   The idea of a white savior director retelling a revisionist, wish fulfillment black slave fantasy makes about as much sense as a movie with Jesus rising up and murdering Pontius Pilate right there on the spot.  Is the world a better place for having experienced such a rendering?  In typical Tarantino fashion, this is another B-movie blaxploitation saga set a few years before the Civil War about an escaped slave named Django (Jamie Foxx) that wreaks havoc and a trail of dead bodies along the way as he seeks to find his missing wife on their road to freedom.  As this director has done since his earliest films, he continues to immerse his films with the use of the word “nigger,” using the historical pretext to literally bombard the viewer with its over-use by both black and white characters, as if intending to either find humor or neutralize the meaning of the word.  Of course, just the opposite happens, as the repugnant peculiarity of hearing the word “nigger” repeated so often is like hearing a bell ring repeatedly with each use, calling attention to itself again and again, where it doesn’t shock or provoke, but regrettably plummets into a sinkhole of adolescent tastelessness, as it has throughout Tarantino’s entire career.

While the film plays out like an irreverent spaghetti western, using stereotype and exaggeration, what’s missing is the everpresent tone of danger and suspense in Sergio Leone movies, where the bad guys (Lee Van Cleef, Eli Wallach) are often as cunning and conniving as the hero, where extreme character ingenuity places the outcome in doubt.  In this film, like blaxploitation movies, the outcome is never in doubt, as the world is broken down into good and evil, and evil gets a taste of its own medicine.  The problem here is not the revenge fantasy itself, such as the bumbling Klu Klux Klan raid that amusingly gets hung up on the pettiness of seemingly insignificant details, but the loathsome degree of wretched sadism that goes along with it, which brings a repellant nature to the film.  Outside of two central characters, Christoph Waltz as Dr. King Schultz, a highly successful bounty hunter, and Foxx as Django, a young apprentice in the trade, who operate as a professionally trained team throughout, and an always convincing appearance from Samuel L. Jackson as an ever faithful yet uppity house “nigger,” there is no character development whatsoever.  If this were a rollicking screwball comedy where people were continually being made fun of, perhaps exaggeration and excess would be relevant to the style of humor, but much of this is no laughing matter, and is instead simply endless talking waiting around for something vile to happen, where the foul and tasteless use of the n-word passes for the otherwise missing drama, where the South is continually reduced to typical ROOTS (1977) style set pieces and sadistic white stereotypes, people with a salacious appetite for the most gruesome aspects of slavery.  For a near 3-hour film, this can only be described as excessive, especially when it’s being passed off as Hollywood entertainment.  Waltz is easily the most entertaining character, while as a German European he’s also the least racially offensive, relishing his role as a skilled marksman, who has a way of concealing that fact through his endless verbiage which acts as a smokescreen or camouflage for his real intentions, murder for hire.

Foxx is a bit preposterous in the role, as he quickly shifts from a nearly inaudible chained slave huddled together with other similarly shackled men to a highly skilled black cowboy with excellent horsemanship and near perfect shooting skills, where the audacity of what comes out of his mouth would no doubt have gotten him shot in real life, but in this version people somehow avoid the temptation, perhaps enthralled by the prospective financial incentives offered by Dr. King, a method used to lure out his targets.  Waltz’s introductory gift for gab is charming, where his flowery elucidation of the English language in the remote, uneducated frontier of the American West has an element of the patently absurd about it, where most of the humor is in the earlier stages of their friendship.  By the time they get to a slave plantation in Mississippi, where the continuously smug Leonardo DiCaprio continually overacts as the smarmy plantation owner who happens to be in possession of Django’s wife, a slave supposedly given the mythical name of Brünnhilde (Kerry Washington) by her white German mistress, the bounty hunters are knee deep in Southern Gothic plantation lore, expressed through a series of ever increasing levels of sadistic horror viewed with varying degrees of pleasure, such as witnessing a slave get eaten alive by a pack of wild dogs, or casually watching, over cocktails, Mandingo fighters battle to the death.  Why this needs to be exhibited as entertainment fodder in the film is an open question, as in SHOAH (1985), Claude Lanzmann makes a 9 and ½ hour Holocaust documentary without ever showing the death camps, and Rolf de Heer’s THE TRACKER (2002) reveals the wisdom and cultural insight of a chained black Aboriginal in the Australian outback, continually differentiating between the brutal racism of his white captors and the sly intelligence of his own character.  Rather than escalate these cultural differences in a journey of mounting psychological dread, Tarantino simply leads us where he predictably always leads his audience, into a nihilistic, apocalyptic hellfire of explosions and gunfire, where bodies are strewn across the screen in a landscape of the collected dead, where it may as well be zombies getting blown away.  This is a sorry excuse for a movie turning the wretchedness of slavery into sports bar entertainment.
Posted by Robert Kennedy at 9:18 AM