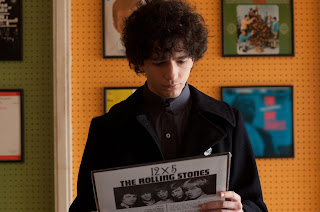 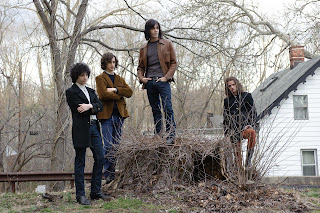 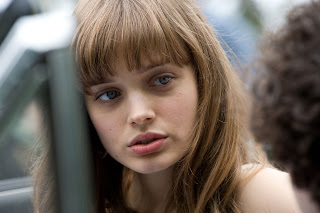 
They say good things come in small packages, and this is the latest from The Sopranos (1999 – 2007) writer/director David Chase, where you’d expect plenty of advance publicity, but this little film flies under the radar.  Set in the early 60’s paralleling a well-known story of when childhood friends Keith Richards and Mick Jagger met at a railway station in 1960, where the Muddy Waters and Chuck Berry records Jagger was carrying caught Richard’s eye, claiming he could already play some of those tunes on the guitar, and thus a band (with the help of fellow artist Brian Jones) named The Rolling Stones was born.  Narrated at both the beginning and end by an unseen young girl (who turns out to be the lead character’s barely seen younger sister, Meg Guzulescu), she suggests this story concerns another band that no one’s ever heard of, similarly formed about the same time.  This eerie voice is reminiscent of the rich, descriptive detail described by a collective Greek chorus narrative in the 1993 novel The Virgin Suicides, which turns out to be neighborhood boys recalling a family of gorgeously attractive young girls across the street during the 1970’s.  Much like the director’s own life, this story concerns a group of young teenage boys from suburban New Jersey in the 1960’s, led by Douglas (John Magaro), the drummer and eventual lead singer of a rock band that he forms with a couple friends, temperamental lead guitarist Eugene (Jack Huston) and childhood best friend Wells (Will Brill), playing covers of bands admired by the Stones, giving this movie a killer soundtrack assembled by E Street Band member Steven Van Zandt.  While all these guys talk about is music and their band, just waiting for the day when they get discovered, building their lives for that inevitability, they also all vie for the attention of a beautiful young girl who takes an interest in their music, Grace (Bella Heathcote), who adds a luminous Marianne Faithfull aura of mystique.  What’s apparent from the outset is this is about more than the music, which is heard continuously throughout the film, becoming a strangely evocative period piece of the early 60’s.


Of interest, this film tells the story with jagged edges, as it never advances in a straight line, providing novelesque detail to what amounts to a short story, always adding more than the viewer needs, giving the film a poetic lyricism, becoming less about their individual lives and more about the time they’re living in.  If viewers get hung up on the narrative of what’s happening, which includes plenty of plot meanderings, they may miss much of the period embellishment that is an essential ingredient to the film, actually becoming the central focus of the film, beautifully capturing the era’s conflicting attitudes.  The band continuously gets bogged down in minor disputes and disagreements, eventually having to deal with the melodramatic, self-destructive outbursts of Eugene, where they are continuously in a state of flux, always becoming something they have yet to achieve.  Meanwhile, life goes on, where Douglas’s Dad, none other than James Gandolfini (priceless, as always), gives him plenty of generation gap grief, “my son dresses like a queer,” where Dad’s upset by his Dylanesque hair and artsy fartsy plans, none of which pay the bills, waiting for him to get real and develop a legitimate career instead of throwing his life away on a stupid dream that will never amount to anything.  But Douglas is a product of the times, keying into the bohemian subculture where art and music have a mystical ability to transcend ordinary, everyday routines.  In this way, the film is a kissing cousin to Olivier Assayas’s similarly autobiographical account of his own turbulent life in the 60’s, Something in the Air (Après mai) (2012), though a few years before the Parisian student demonstrations in May ’68.  One of the more amusing scenes is witnessing Douglas and Grace in a movie theater watching Antonioni’s BLOW-UP (1966), where Douglas is struck by lengthy scenes of silence in a public park where “nothing is happening” and there are no musical cues to evoke mood.  Grace, however, has the good sense to recognize that “the trees are the music.”


Early in the film, the band, produced and assisted by Van Zandt (who interestingly also plays Silvio Dante, the behind-the-scenes consigliere to the Soprano family), spends plenty of time playing covers of familiar radio music, always searching for that ever elusive music contract, where by the time they finally discover an agent, Brad Garrett, he lays it out straight, giving them the facts of life, suggesting the music business is “10% inspiration and 90% perspiration,” instructing them to pay their dues and develop a loyal fanbase in local bar scenes, much like the Beatles did in Hamburg, Germany or the Ramones in New York’s CBGB.  But in the changing times, Douglas wants to get away from Jersey with Grace and head to Los Angeles, parting company with the band.  Once that part of the story ends, the final sequences are among the more poetically ambiguous of any film seen this year, as their coming-of age lives simply evolve.  The transition from East coast to West coast is mesmerizing, especially the sadness etched on his Dad’s face watching his own dreams drive away in the form of his son, where in LA he may as well be a stranger in a strange land, as the West coast has a rapidly developing counterculture movement while he’s still dressing with the straight crowd wearing sport jackets.  Having always defined himself as an artist fronting a band, he suddenly finds himself without a purpose or meaning in life, stripped naked, just a solitary soul, where there may be hundreds of thousands or more just like him, discovering he’s not so unique.  This revelation is chilling, but one that personifies the 60’s, where the Baby Boomer’s sober up and come of age only to discover they’re just like everybody else, defined by their own mediocrity and routine.  There’s a beautifully written scene where Douglas is aimlessly hitchhiking into the unknown, with no particular destination, a Jack Nicholson moment right out of FIVE EASY PIECES (1970), and someone dressed like one of the mimes in Antonioni’s BLOW-UP stops to pick him up, but he’s not yet ready to go there, into the empty spaces between what’s real and what’s only imagined, into the quiet rustle of Antonioni’s trees.  It’s an open question whether cinema can replace music as the new obsession in Douglas’s life, or drugs, or the protest movement, becoming something of an unanswered reverie expressed only through a curious final abstraction.


‘Not Fade Away’ Soundtrack Track Listing


*Includes seven songs by the fictional band the Twylight Zones, with stars John Magaro and Jack Huston contributing their own vocals to the tracks, which were produced by Steven Van Zandt. The music was performed by Van Zandt and fellow E Street Band members Max Weinberg and Garry Tallent, with their old friend Bobby Bandiera of Southside Johnny and the Asbury Jukes.
Posted by Robert Kennedy at 9:35 AM