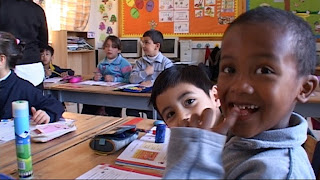 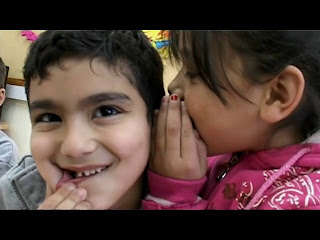 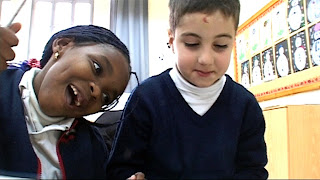 On a map, you can find the island of Cyprus is located south of Turkey, much closer to that country than Greece, yet both nations claim the island as their own.  In 1974 under the Greek military junta, the Greeks carried out a coup d'état in an attempt to unite the island with Greece, but this was immediately countered by a follow up invasion by the Turks, initially landing some 30,000 troops on the island, followed by a larger invasion that eventually accumulated 37% of the island, evicting 180,000 Greek Cypriots from their homes, effectively dividing the island into separate north and south corridors.  Located just 300 meters from the Green Line that splits the capital city of Nicosia into two parts is the Faneromeni school, initially a girl’s school founded in 1859 until the invasion shut the school down, re-opening again due to the rise of immigrant workers settling in an abandoned region of town.  Today there are students from 21 different nationalities in a primary and high school, including a large refugee contingency from the former Soviet nation of Georgia, also Bulgaria, Iraq, China, Turkey, the Philippines, and local Cypriots, all of which adds a unique international challenge in teaching children to understand the concept of a global community.  Encouraged to bring into the classrooms their own personal insight and observations from their own cultures, each student effectively becomes a living ambassador that helps expand not only the horizon of their fellow students but the teaching staff as well.

Lucia Rikaki was born in Greece, studying art history, film, graphic design and photography at the Darlington College of Arts in England, eventually staging theater productions, making 5 narrative films and 15 documentaries before dying of brain cancer late in 2011.  Known by the students as “the lady with the camera,” she began by sitting on the stairs outside the school and asking children what takes place inside, allowing kids to be spontaneous in their thoughts and behavior, as often more than one thing is happening in each shot, as various children are carrying out their own personal agendas, which includes picking on, disagreeing with, harassing, and often ridiculing the various speakers seen on camera.  While the school is openly tolerant of different nationalities, this can be at odds with the government practice of routinely arresting immigrant groups and placing pressure on them to confess when attempting to solve crimes, creating a rampant national xenophobia, which certainly affects the children’s parents, yet the condition is all but absent in the young minds of children.  Guided by the personal observations of the students themselves, the director is an invisible presence in the school, capturing children at ease in the classroom, where their openness, one student after another, reflects an open society, even if it exists only within the safe haven of the school.

While the children are taught about cultural mistreatment, including sexual harassment and racial hostility, they are largely protected from it at school, though their home life may often be inundated with real life turmoil.  The group setting of the school offers a kind of therapeutic alternative to real life, as kids can still play, draw, sing, and perform as a group in a classroom where teachers appreciate the effort made, especially in overcoming the various language and cultural barriers, where it’s obvious many kids of all age groups still struggle with language, which affects their confidence and participation level in class.  The teachers are very hands-on and encouraging, making sure no one is left out, but it’s often difficult bringing out the personalities of the quietest students who remain shy.  Still, the interaction between the students themselves couldn’t be more appealing, as they continually tease one another, not with insults or hurtful expressions, but with playful humor and laughter and recognition that they are all part of the same classroom where challenging one another is part of the learning process.  It feels like an extremely European style of school, as so many have crossed various national borders to arrive there, yet the students are taught to live in a world without borders, where everyone’s cultural habits and customs are valued and respected, where they all take an interest in each other’s differences, where teachers and students alike are taught how to embrace friendship as a meaningful learning criteria, where learning how to help one another by being a friend seems wise beyond their years, but the world expressed by these kids is brimming with hope and optimism.
Posted by Robert Kennedy at 9:15 AM