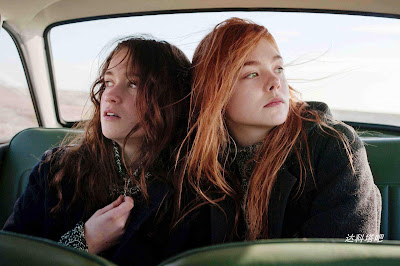 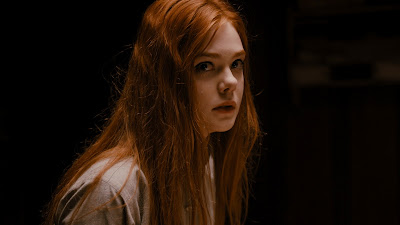 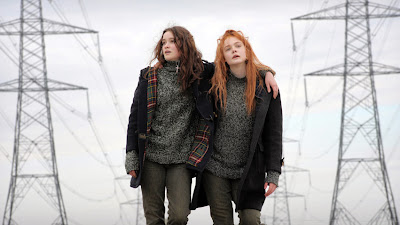 
Sally Potter sees the breakdown of moral order not only as an expected part of the human condition, but also equally problematic is the way humans obsess over the impact.  Any film that starts with the picture of an H-bomb explosion, followed by shots of an obliterated Hiroshima shortly afterwards in 1945, could hardly be considered subtle, and this film parallels the shattering aftereffects in an equally devastating portrait of human callousness and careless disregard.  By creating a story of two British mothers who were pregnant in the hospital at the time, she frames the original incident as having impact over the rest of their lives, and more importantly, their children’s lives.  While YES (2004) was an artist’s personal reaction to the 9/11 attacks, where she started writing the story the day after, this film is about growing up in the late 50’s and early 60’s when the world was dominated by the imminent threat of nuclear attack, culminating with the Berlin Crisis of 1961, the Cuban Missile Crisis in 1962, the closest the world has ever come to an all-out nuclear war.  As someone who grew up during this era, mainstream magazines featured photo essays displaying the ghastly effects of deformed thalidomide babies, with constant references to survivalist methods and building backyard bomb shelters, showing a concern about the rise of building nuclear reactors, especially after the SL-1 disaster of 1961, the only known fatal reactor accident in United States history, when a steam explosion killed three plant operators.  Both adults and children were constantly fed end-of-the-world images, where popular books of the era with post-apocalyptic themes were On the Beach (1959), Alas, Babylon (1960), and Fail Safe (1964), while Godzilla movies became all the rage in Japan, becoming one of the most recognizable symbols of Japanese popular culture, the only nation to suffer the effects of a nuclear bomb.  Perhaps the ultimate black comedy to grab the public’s attention was Stanley Kubrick’s Dr. Strangelove or: How I Learned to Stop Worrying and Love the Bomb (1964), a laceratingly dark comedy that satirizes the theory of mutually assured destruction, aka the doomsday device which leads to complete, utter and irrevocable annihilation.  In England, where this film takes place, the trauma from World War II remains, where recollections are still prominent of underground subway stations being used as air-raid shelters from The Blitz, prolonged nightly bombing attacks of London by Nazi Germany at the start of World War II, causing a sudden rise of built-in cellars afterwards in larger houses.  It took until the reign of Prime Minister Tony Blair (1997 – 2007) to pay off the reconstruction post-war debt to the United States, where a national program of shared sacrifice was the rule, so part of the character of the country is defined by the arduous challenge to rebuild their lives.  Anyone who has lived through this era realizes what a profound effect it had on all age groups, which is the setting for Potter’s film.


While this director has a career in experimental (and somewhat autobiographical) films, where her film YES (2004) was strangely written in iambic pentameter, this may be her most conventional and audience friendly effort, beautifully shot in ‘Scope by Robbie Ryan, where it’s primarily a character study that accentuates strong performances all around, one of the director’s strengths, in particular Elle Fanning (who was 13 when the film was shot) as Ginger and Alice Englert (Jane Campion’s daughter) as Rosa, both born on the same day in the same hospital seventeen years earlier.  Set in London in 1962, the film races through their earlier childhood where the two are seen spending all their time together and remain best friends for life.  Rosa never knew her father, having abandoned his child at birth, while Ginger’s parents have a rocky marriage, where her mother Natalie (Christina Hendricks) suspects her husband Roland (Alessandro Nivola) of sleeping around with younger women, usually with good reason, as he’s something of a libertarian, especially where his sexual interests are concerned.  Nonetheless the girls are intelligent, well educated, and highly individualistic, often giggly when they’re together, going through typical teenage stages like kissing and smoking together, also ironing (straightening) their hair, while also taking an active interest in various social causes, like the campaign for nuclear disarmament, also attending Ban the Bomb demonstrations, as this takes place during the era of the Cuban Missile crisis.  This social conscience developing so young pleases her father, as he is a pacifist activist and a former conscientious objector who spent time in jail for his beliefs, writing articles advocating that young men refuse to serve in the military, a thankless job that keeps him busy and away from home for lengthy spells.  Ginger somewhat idealizes her father, as he’s a man of ideas, and mostly locks horns with her mother, as she’s the one that has to keep an eye on her daughter, as Ginger and Rosa are mostly out on their own, keeping their own schedules, doing pretty much whatever they want.  Ginger expresses an interest in poetry and is seen reading constantly, hoping she might be a poet, while Rosa is less introverted, finding it easier to meet boys.


What makes this film especially interesting is how effortlessly it sets up the youthful idealism as an extension of 50’s conformism, perhaps best expressed by the superbly inventive jazz music soundtrack that perfectly expresses a liberation of the spirit, a literal transformation in sound, beginning with Dave Brubeck’s Take Five - The Dave Brubeck Quartet (1959) (5:20), but also in short order Bird Gets The Worm / Charlie Parker The Savoy Recordings (2:38), Sidney Bechet - Petite fleur - JazzAndBluesExperience (3:19), Thelonious Monk - (I Don't Stand) A Ghost Of A Chance (With You) (4:22), and Miles Davis - Blue In Green (HQ) - YouTube (5:33), where this pair of friends is a perfect example of tolerance and open mindedness in an era when the women’s movement had not yet begun, and no one had yet heard of the Beatles and the Rolling Stones.  They were flower children before the term was invented and attracted to worldwide peace movements before they were in vogue by the end of the decade.  Potter then turns the screws on their friendship, allowing reality to intervene, which is shockingly discomforting, becoming the dramatic thrust of the film, blossoming from their carefree youth into attractive young women vying for the attention of the same man, becoming more intensely serious and dramatically complex, evolving much like a stage play.  Rosa grows sick and tired of hearing Ginger continually talk about her Dad, having never had one, so she decides to do something about it just as Ginger declares her independence from her mother, blaming everything on her small-mindedness, moving in with her Dad.  But her day of liberation is jeopardized by her best friend, who suddenly takes a romantic interest in her father, exposing a free-thinking man of the 60’s for what he is, a sexual predator of young girls whose ego is stroked and vainly flattered by all the attention, disgustingly rationalizing his actions even as Ginger’s interior world is shattered and destroyed.  Interestingly, the mother she felt was the cause of all her teenage troubles ends up being her staunchest ally, but at seventeen, an age of awkwardness and emotional turmoil, life is never what it seems.  While Ginger’s attention was on nuclear fallout and the end of the world, her innocence is demolished into smithereens in a Cassavetes-like scene from A Woman Under the Influence (1974).  As an interior journey, the film turns extraordinarily bleak, especially the way secondary characters rarely seen in 60’s popular culture (a radical feminist and gay lovers) are used as a kind of Greek chorus to comment upon the moral abyss of the age, where complacency becomes a substitute for destroyed ideals.  With eloquence and poetry, the film ends on a grace note with Thelonious Monk playing Thelonious Monk -The man I love (5:20).
Posted by Robert Kennedy at 2:01 AM