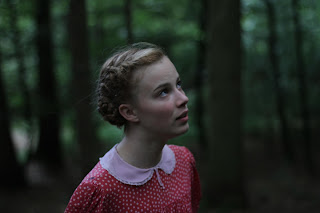 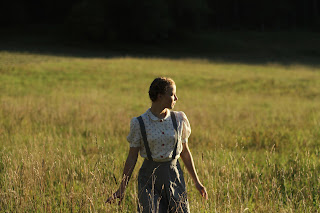 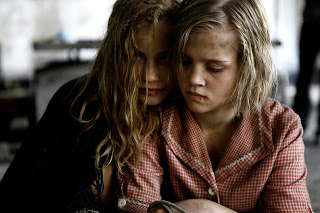 One of the more uniquely original and powerfully compelling war stories to appear onscreen for awhile, this is a joint Australian-German production, where an Australian director has essentially made a German language film, co-adapting the screenplay along with British writer Robin Mukherjee from one of the three stories in British author Rachel Seiffert’s 2001 novel The Dark Room.  Unlike most World War II war stories, this one contains no battle scenes and takes place just after the war, where the focus is on the psychological aftereffects where German people are quickly being judged and harshly condemned, little of which is widely known or written about.  Told from the point of view of surviving Nazi children who were once part of the indoctrinated Hitler Youth where they were led to believe Hitler was a national hero, a leader glorifying the best of what Germany represents, reality comes as a crushing blow, where mostly they are in complete disbelief, as if a terrible hoax was being played upon the entire nation, not even realizing at first that Nazi Germany has been wiped off the map, as the rumors they are hearing about death camps are too gruesome and impossible to believe.  Suddenly ashamed of their German heritage, they are part of a stunned and disbelieving nation that is unable to express their grief.  While the film plots the slow journey of growing awareness, it should be pointed out that some 12 to 14 million German people living in German occupied territories during the war had to be transported back to Germany, becoming the largest transfer of any population in modern European history, where most came from the Eastern territories of Poland and the Soviet Union (7 million) and Czechoslovakia (3 million).  It was this group, mostly women and children that were the most severely mistreated before they were ultimately transported back to Germany.  Thousands died in forced labor camps, millions died of hunger and deprivation, while as many as 2 million women and girls were raped by members of the Soviet Red Army, some as many as 60 or 70 times, a despicable way of punishing the defeated, all carrying with them a collective trauma that became part of the new East German nation.  While this film doesn’t delve into historical details, it certainly examines the heavily stigmatized psychological shame of defeat.

In the spring of 1945, as the last signs of German resistance collapse, Hitler commits suicide as invading Allied forces are streaming into Germany.  Only after the Third Reich is defeated militarily are the horrors of the Holocaust revealed, instantly tarnishing and disgracing the entire German nation.  The film stars Saskia Rosendahl as Lore, at age 14 the oldest of five children, including Nele Trebs as her younger sister Liesel, André Frid as one of three younger brothers, Günther, Mika Seidel as Jürgen, and a perpetually crying baby named Peter.  As their father is a Nazi SS officer, the parents are seen early on burning all incriminating evidence such as books, swastikas, and other war memorabilia, literally fearing for their lives before both are imprisoned by the Allies, leaving the children alone to fend for themselves, where the last instruction the mother gives them is to make their way to Hamburg, some 500 miles to the north, where they will be safe with their grandmother.  Having little money and only a few items of jewelry, their long, hellish journey is a nightmare of filth, disease, and starvation, where they join a mass exodus of refugees across the country all seeking food and safety, where their privileged status as part of the Nazi elite is quickly undermined by the most urgent need of the bare necessities, food and drink for the baby, and the need to stay alive, often forced to beg angry and hostile strangers for help.  For many, it will be hard to imagine that victims of the Holocaust are not only those that perished in the camps, but also the German people struggling to understand what took place around them, feeling utterly betrayed, confused beyond belief, where each startling new revelation is more horrifying than the last.  What elevates this film is its refusal to shy away from the subject matter, where Lore is a proud and educated German, where the only nation she knows is a Nazi state, but she’s barely a teenager suddenly thrust into this position of responsibility and dire urgency, where they literally have to walk most of the way through the hallucinogenic squalor of a scurvy-laden, death-tinged Black Forest, as the trains, now in Allied control, are no longer running.  “You must remember who you are,” Lore insists, as all of the children are prominently featured throughout, each with their own individual characteristics, but also victimized by their Nazi upbringing that is little more than a lie, where each has to confront this brutal realization in their own way.

What is exemplary here is the consistency of tone throughout, where Lore, despite her strict upbringing of German arrogance and staunchly anti-Semitic views, is such a sympathetic character, profoundly out of her element, destitute and alone as she guides her family through the countryside, but also deeply disturbed and conflicted about what she discovers.  Most of this is expressed through wordless sequences of doubt and uncertainty, where the camera follows her in close ups, changing speeds to slow motion, where she struggles with every decision, unsure of herself every step of the way, yet forcing herself to exude a quiet confidence that is continually shattered.  This internal imbalance is contrasted by the pastoral beauty of the surrounding countryside, often idyllic, beautifully photographed by Adam Arkapaw, accentuating a simple harmony of nature that humans continually defile, while the hauntingly poetic musical score by Max Richter adds still more layers of depth and complexity.  As they quickly take their place at the bottom of the food chain, they are forced to take the blame for the hateful actions of their parents and the entire Nazi regime, as a flurry of contempt and derision is suddenly thrust upon their shoulders, where especially the youngest boys are utterly confused what to believe.  When a strange young man begins to follow them on the road, Thomas, Kai Malina from Haneke’s THE WHITE RIBBON (2009), Lore is doubly overprotective, especially when she discovers he’s carrying Jewish identity papers and bears a concentration camp tattoo, not wishing for him to touch any of them.  Her iron will slowly dissolves into a different kind of standoffish acquiescence, however, as he loves to play with the boys and as he’s able to find food, where the balance of power literally shifts in his direction, reminiscent of Jenny Agutter’s equally enthralling transformation in Nicolas Roeg’s WALKABOUT (1971).  This concession on her part, the yielding of power to a completely unknown entity, is the mirror image of the Third Reich, where she has little choice but to capitulate, losing the last shred of Aryan dignity in the process, where she is literally transformed by the abandonment and despair felt by every German citizen, as they were ultimately lied to and betrayed by the Nazi regime.  This film offers a unique perspective, exploring the horrendous consequences of the Holocaust through the eyes of the Nazi children who will bear the brunt of the sins of their parents, an inspired and thoroughly provocative account that couldn’t be more poetically expressed, where Saskia Rosendahl’s performance is utterly captivating.
Posted by Robert Kennedy at 2:10 AM