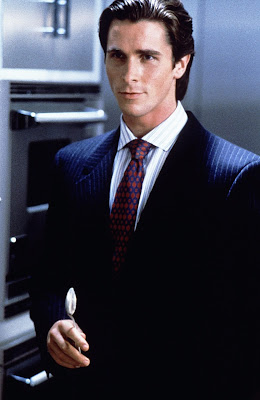 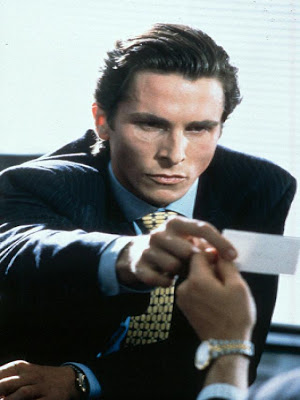 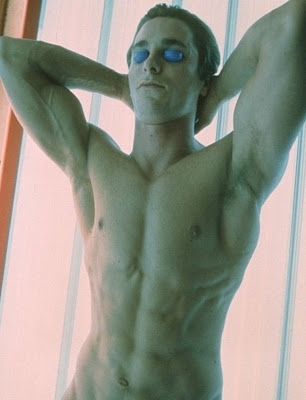 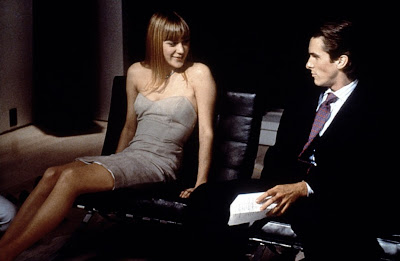 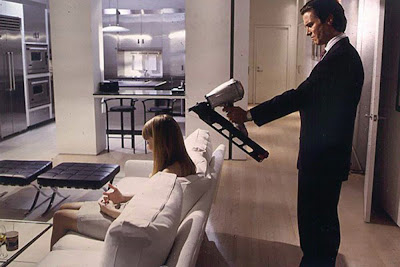 I have to return some videotapes.     —Patrick Bateman (Christian Bale)

A film that seems to have been inspired by both Ronald Reagan’s right-leaning seismic shift on the social consciousness of America and David Lynch’s LOST HIGHWAY (1997), both of which suggest near inexplicable psychotic ruptures.  Meet Patrick Bateman (Christian Bale), an anonymous man in a perfectly chosen, well-tailored suit working on Wall Street which is suddenly aflush with money in the late 80’s, given the green light by the Reagan administration where portfolios skyrocket through the roof.  In this competitive era, jealousies are bound to exist, as it’s each man for himself, yet each yearns to be the alpha male in the corporate world, which is seen as a soulless, empty universe of rampant consumerism and hedonism, all fighting to be the star player with the biggest office, the sexiest secretary, an open ended expense account, and the apartment with a giant picture window overlooking Central Park.  Bateman narrates his existential sense of detachment to this meaningless existence (“I simply am not there”), as he spends all his income on expensive clothes, fancy restaurants, and upscale bars as well as high end drugs, pornography and prostitutes, all in an attempt to fit in.  It’s as if he’s a stranger in a strange land, feeling completely alien to the world around him. Harron does an exquisite job with space, exaggerating the influence of exteriors and interiors to reveal a pervading sense of vacuousness flooding the screen, as the near mindless chatter signifies the extent to which nothing matters to these people except themselves.  There’s a defining sequence where the men compare business cards, examining each with the care and consideration as they might a fragile art object, each man wanting theirs to be the best, then growing downbeat and dejected when people prefer someone else’s.  It’s all about making a name for themselves, being the center of attention, being the person other people want to be.

It starts with rude comments that are so over the top one actually wonders if they heard correctly, but Bateman’s inner thoughts begin seeping out loud, yet these coarse, vulgar thoughts reflect the bullying nature of a man who thinks everyone else is subservient to him.  But where this film veers into its own unique territory is when the things people sometimes think to themselves start happening onscreen.  With visions of the surreal, Bateman takes on psychopathic behavior by picking up prostitutes and becoming a sex phenom in bed, especially provocative when he looks in the mirror at himself as he is fucking two women.  Here and only here, in a kind of wish fulfillment universe, Bateman has thrust himself into the center of attention, where he’s the master of the universe.  All the men in Bateman’s world ever talk about sounds like magazine descriptions of the best food, the best dish, the most perfect restaurant, or the “in” place to be.  The use of music complements this hyperbole, as Bateman begins describing in meticulous detail, which may as well be a psychological indicator, the music he is about to play before his lurid sex scenes, which include Huey Lewis & the News singing “Hip to Be Square” Hip to be Square - American Psycho (3/12) Movie CLIP ... - YouTube (2:56), which leads to an ax murder of his chief business rival, or the overpraised but inescapably monotonous Phil Collins song “Sussudio” American Psycho: Funniest Sex Scene Ever - YouTube (6:23), something bound to have been heard incessantly on the Miami Vice TV show, but used here to beef up Bateman’s overhyped sense of masculinity and swagger.


When Bateman starts going after naked women with chainsaws, we know he’s taken a dive into a dark void, which leads to still more elaborately staged, near comic book mentality sequences that simply blow out of proportion, as the guy is starting to believe he might be getting into trouble.  But this is the 80’s, an era of high deficits where no one takes any responsibility, where Reagan is seen on TV defending the Iran-Contra scandal, where his government publicly told the nation one thing while secretly performing other actions out of sight from the public eye, suggestions of a secret government that answers to no one and exists outside any democratic measures.  If the President can say one thing on TV, but then do what he wants offscreen, then why can’t normal citizens?  All roads lead to self-serving measures, until the excess baggage begins backing up with dead and mutilated bodies that have been stashed somewhere, and suddenly those occasionally hilarious private fantasies, where the schism between fantasy and reality becomes seamless after while, explode into something so damaging and brutal that he begins to believe he can no longer handle it alone.  This is a creepy and bizarre nightmare of Reaganomics, where this sterile existence is completely insulated and protected from the outside world by huge amounts of money and influence, remaining out of bounds to the normal citizen, yet it is still portrayed as that promised land at the end of the rainbow, where the American dream is seen as little more than selfish greed, envisioned here in a scathing social satire where everyone wants to worship at the altar of its all consuming powers.
Posted by Robert Kennedy at 2:30 AM