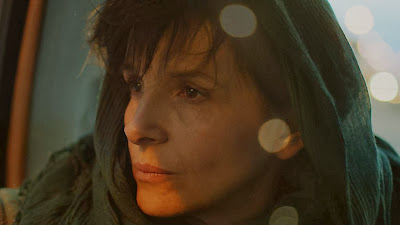 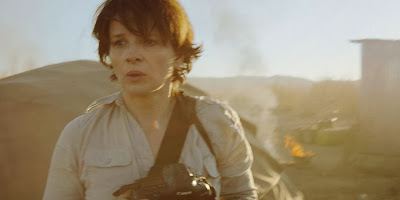 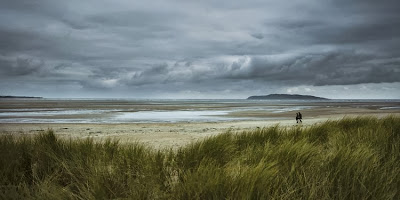 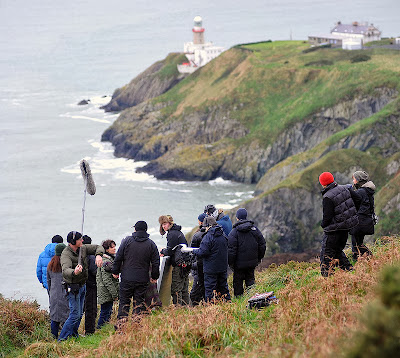 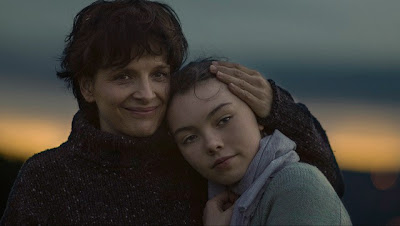 Unfortunately we’ve seen Juliette Binoche take on this kind of overwrought material before in Amos Gitai’s DISENGAGEMENT (2007), but this is even worse, as what’s most troubling about this film is the way whites use a crisis in Africa to draw attention and add intensity to their films, which are largely about white relationships, where the parallel between the two worlds couldn’t be less appropriate, that is more like commercial exploitation, especially when the filmmaker glosses over the historical African context with a lot of self-serving moralizing that sounds more like lectures than anything remotely resembling real life.  Binoche did just the opposite by capturing the world’s imagination in her breakout film, THE UNBEARABLE LIGHTNESS OF BEING (1988), another film that explores personal relationships, but one that beautifully blends dreams of freedom and democracy and the possibility of artistic expression during Czechoslovakia’s Prague Spring in 1968 with images of Soviet tanks occupying the streets, all but thwarting that dream in the August 1968 invasion, continually placing the characters and their ideals within a specific historical context.  If anything, this film has a naïveté about it that is equally troublesome, and while it raises issues of the number killed in the seemingly unending Congolese Civil War, pointing its finger at the United Nations and the world for doing nothing, it neglects to point out how the Belgians under King Leopold more than a hundred years ago killed as many as ten million people, including the mutilation of children, all while ravaging the region for rubber and other precious resources.  While this is a particularly well meaning film, beautifully photographed by John Christian Rosenlund in Ireland, Morocco, Kenya, and Kabul, it tends to generalize with what amounts to a dogooder’s perspective.

Binoche plays Rebecca, a driven and seemingly obsessed war photographer who throws caution to the winds and finds herself sent to trouble spots all over the globe, seen taking extraordinary risks in the outset as she’s been given remarkable access by the Afghan insurgency to photograph a young teenage suicide bomber as she prepares for her mission, receiving a purifying bath, prayers from her elders, and goodbyes from her family as she straps a self-detonating vest of explosives under her robe and is driven to the heavily populated streets of Kabul.  When Rebecca is let out of the van, her instincts to continue to snap photos draws the attention of the police, creating momentary panic where the young bomber prematurely detonates her bombs, injuring Rebecca, seen rising from the mayhem and ashy debris in slow motion, regathering her camera and snapping a few more photos before she collapses—all in a day’s work.  When she awakes, she is recovering at a hospital in Dubai with a punctured lung, visited by her husband Marcus (Nikolaj Coster-Waldau), though he offers a noticeably chilly reception, a complete contrast to her greeting back home in Ireland, living in a beautiful house by the ocean, where her youngest daughter is overly excited to see her, hanging up a “welcome home Mom” sign, while her older teenage daughter Steph (Lauryn Canny), easily one of the best things in the film, and yes, about the same age as the suicide bomber, remains standoffish.  The gist of it is Marcus has had it with Rebecca playing Russian roulette with her life, not knowing whether she’ll ever come home from an assignment, creating nothing but nervous anxiety in the two girls, where he threatens to leave her and take the girls, “for the sake of the children.”  Somehow, if the shoe were on the other foot, and the man was the brave and heroic war photographer, this wouldn’t be playing out this way, where she’s literally blamed by being the best in her profession, something that’s completely overlooked, and she’s likely been good at it since before they started a family together, so there’s something awfully contrived about these sudden crocodile tears, yet this personal outrage at her career, surprisingly, becomes the emotional centerpiece of the movie.

As Marcus is something of an unyielding, immovable force, Rebecca actually agrees to give up her work in dangerous areas, something that her family finds hard to believe, thinking she’s an adrenaline junkie addicted to the thrill and immediacy of the danger.  So while she recovers she becomes a stay at home Mom, reestablishing harmony and equilibrium within the family, but immediately recognizes “I'm not good at life ... being normal.”  In an attempt to breach the emotional divide with Steph, who is working on an African project at school, Rebecca offers her free use of photos she’s taken in the region, and introduces her to people with specialized knowledge of the region.  Incredibly, this is not enough, as Steph overhears her mom receiving a job offer taking pictures of refugee camps in Kenya, and suddenly she decides this would be a good idea for a mother/daughter adventure, especially after hearing promises that the region is “safe.”  Mind you, what family would run off to Africa for a kid’s high school project?  This isn’t just privilege, but defies belief.  Nonetheless, what begins as an exotic adventure into strange and mysterious lands suddenly turns ugly when the inevitable happens, as the supposedly safe region is attacked by rebel forces, and Mom’s instincts kick in while her daughter is ushered off into safety in an uncontrollable state of tearful anxiety.  When Marcus finds out, off course, all bets are off in their marriage, as he has what amounts to a hissy fit, claiming irreconcilable differences.  While Rebecca is truly conflicted, where Binoche beautifully captures the psychological complexity of her character, Marcus remains one dimensional, where his emotional recalcitrance is equivalent to close-mindedness and intolerance, exactly the kind of person who remains heartlessly unaffected by the photos Rebecca takes, which are earth-shatteringly powerful.  While the director himself was a war photographer, where his photos of the Congo are used in the film, the overly privileged characters in the film are not only the wrong people to be informing the audience about Africa, where the conversations aren’t the least bit natural, but the inflexible absolutism expressed by Marcus, believing the children are better served by removing the mother from the home, where his idea of a better solution is separation and divorce, isn’t about to make his children’s anxieties go away.
Posted by Robert Kennedy at 9:30 AM