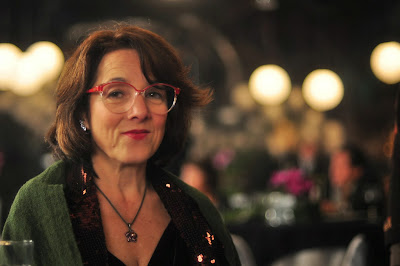 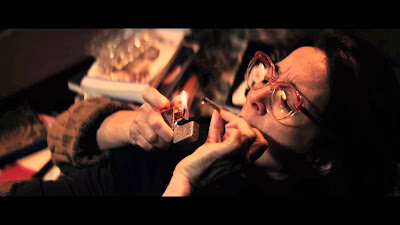 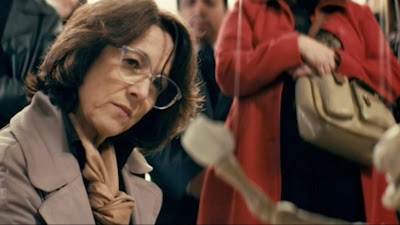 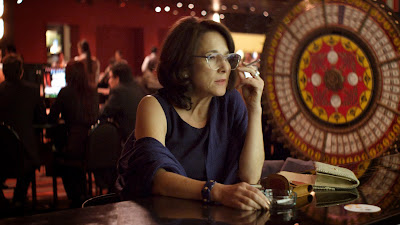 
Not as cool as the original Laura Branigan version singing “Gloria” Laura Branigan - Gloria YouTube (3:52), or Van Morrison with an earlier song from Them, Them Gloria Original 1963  YouTube (2:36) singing G-L-O-R-I-A, Glo-o-ria, or even a cover version from the Chicago garage rock band Shadows of Knight Gloria - The Shadows of Knight YouTube (2:33), but one guesses anyone who’s never heard those prior versions of the song might find this film version enthralling, as they’re hearing it for the very first time.  But hey, the song was even used in Adrian Lyne’s FLASHDANCE (1983) for Christ’s sake, and interestingly enough to despairing effect after getting amped up in an ice-skating sequence, so what are we talking about?  Not sure what to make of all the festival love for this film, as any movie with a distinctively disco soundtrack is going to alienate a certain element if it’s not used in a clever manner, and it was impossible to separate Paulina García’s look as the lead character Gloria from Dustin Hoffman in drag playing the role of a woman in TOOTSIE (1982), as their look is remarkably similar.  The problem is how grounded this film is in mainstream cinema, where it remains on the surface, revealing the obvious, but never really digs deeper or provides much more.  Despite being in nearly every shot of the movie set in Santiago, Chile, we still know very little about the lead character of Gloria other than the fact that she’s desperately lonely, ten years divorced in her late 50’s, working a dull job, where she appears as disconnected from her own family, including two grown children, as she is from any pulse of student political activity, where instead she’s rather typical of dull and insipid bourgeois middle class thinking, people who have the luxury to think about themselves all the time, showing little reflective ability or much of a social conscience.  Instead we watch her go through a midlife crisis where there are few evenings when she is not plied with alcohol, where she is not an altogether sympathetic figure.


To its credit, this feminist-light film insists that Gloria is altogether ordinary, constantly seen humming or singing along to the radio, where she never exhibits signs that she is remotely special or unique, instead she is the picture of mediocrity, but her divorce has left her isolated and excluded from the mainstream, so she tries hard to fit in, where it’s extremely important for her to get out of the apartment and socialize with others, to be seen in public and make contacts.  So while constantly wearing the same insincere smile, she goes dancing at a local singles club for the middle-aged and sips cocktails, which is the sum total of her social life.  Much of her life is left unfilled, such as her job, where we’re not even sure what she does for a living, as she has no interaction with any of her associates, which quite frankly, seems rather strange.  Even if it’s just an office job, with little or no job satisfaction, one of the few pleasures of lonely people is having contact with other people, even at a lousy job.  Instead it’s only the lonely hearts dance club that feels inviting, where she soon meets another middle aged man, Rodolfo (Sergio Hernández), where they end up in the sack together, where the film does not shy away from expressing nudity.  While they obviously enjoy each other’s company, their conversations are always interrupted by cellphone calls, where both spend much of their time connected to these annoying electronic devices, but Rodolfo simply can’t turn his phone off, where he’s always receiving catastrophic calls from his grown daughters, which he continues to receive during dinner dates, often excusing himself, claiming they need him, much to Gloria’s expressed resentment, as the melodramas of overly dependent, grown individuals who must learn to handle their own affairs should simply not be her problem, but Rodolfo constantly gives in to their demands for his time.  Nonetheless, Gloria takes this guy seriously enough to bring to her son’s birthday party, a family gathering where they drink, reminisce, and look at old family photos, but to everyone’s surprise, Rodolfo ends up missing, having left without telling anyone.  Despite his pleas afterwards about being ignored, Gloria tells him to grow a pair of cojones and gives him the brush off.


In a strange moment where Gloria observes a dancing skeleton (like a puppet show) in a crowded street scene, this deathly image of mortality apparently inspires her to give Rodolfo another chance, where they are seen checking in together at a swanky hotel.  After another interrupting phone call, Gloria is about to walk out the door, for good, but turns semi-naked and seduces him instead, a decision she quickly learns to regret, as Rodolfo does another disappearing act from the hotel, leaving her high and dry, where her inappropriate actions afterwards, getting drop dead drunk in the company of strangers, leaves her in a disheveled and disastrous state in the morning where she can’t remember what, if anything, happened.  This collective memory lapse is reflective of a generation under a 15-year dictatorship of Augusto Pinochet in Chile.  While the musical threads that run through the picture form a kind of internal narrative of their own that often parallel Gloria’s state of mind, this is another overly conventional device, especially when using such artificial sounding Spanish radio music, where a Chilean couple sitting behind in the theater were singing along to the lyrics the entire time.  In contrast to this generic, mass produced sound, Gloria attends a gathering at a friend’s home where a couple are singing a heartfelt song to a single guitar, while dozens of bourgeois middle-class people are sitting around drinking wine in a scene that looks like a reflection of their college experiences.  This is the only moment in the entire film where something real might be happening, where people are attuned to something more important than themselves, where perhaps there’s more to one’s life, but this is not to be, as this same couple is seen getting married near the end, and rather than live music, or anything from the heart, it’s non-stop disco music playing in the background, where the surge of Laura Branigan’s song sung in Spanish by Umberto Tozzi, much like Gloria Gaynor’s disco anthem “I Will Survive,” sends an inspiring message that Gloria and the rest of her generation can pick up the pieces of the nation’s collective dysfunction and somehow find their own way to move forward with their lives.  It all just feels overly conventional.
Posted by Robert Kennedy at 12:06 AM