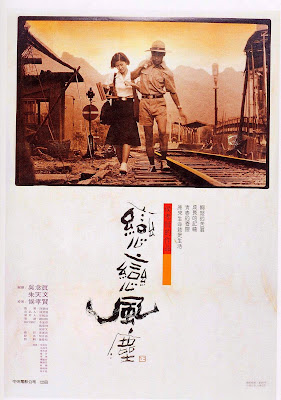 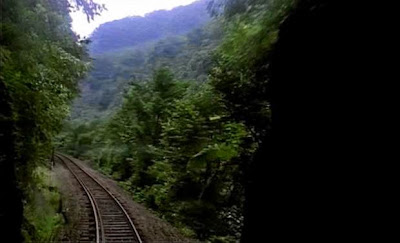 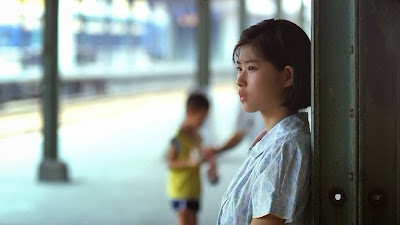 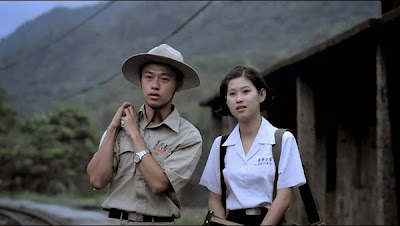 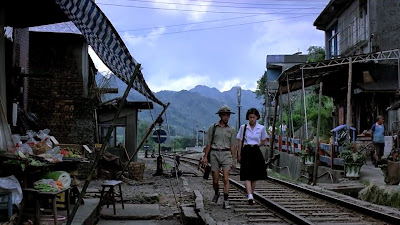 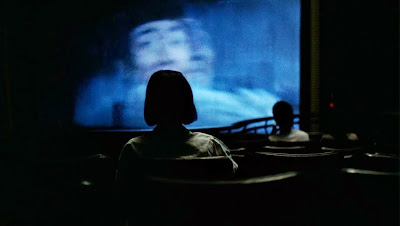 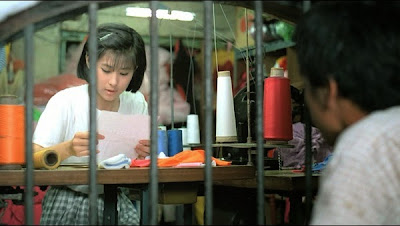 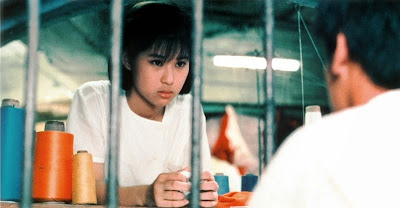 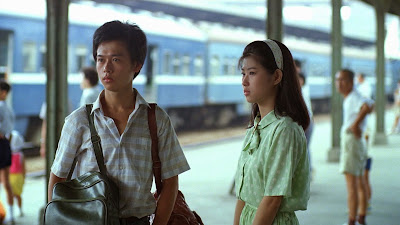 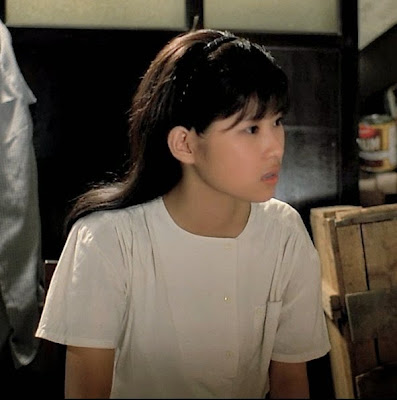 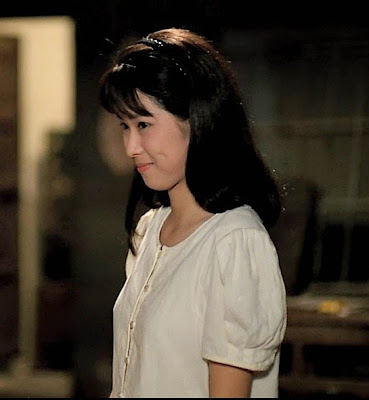 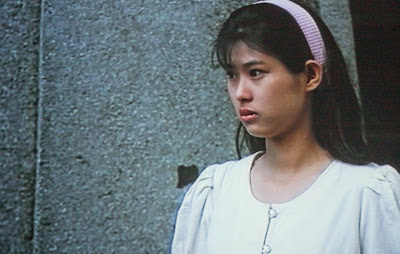 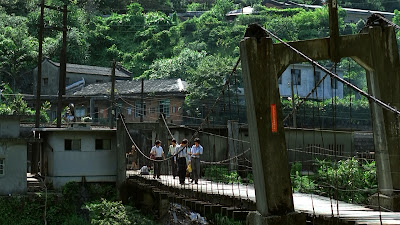 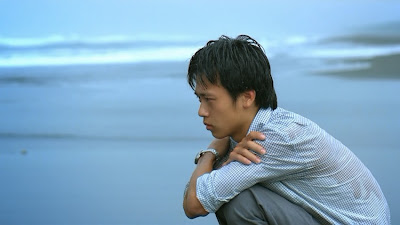 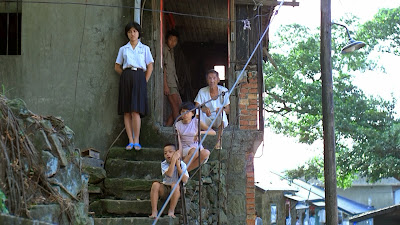 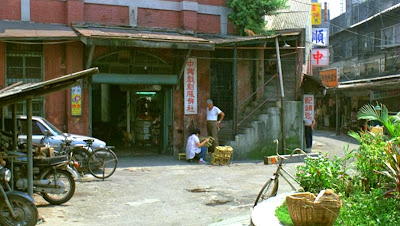 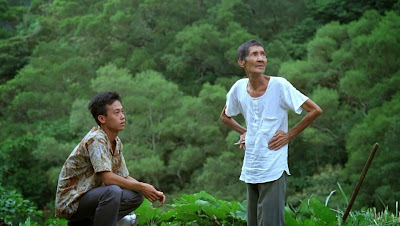 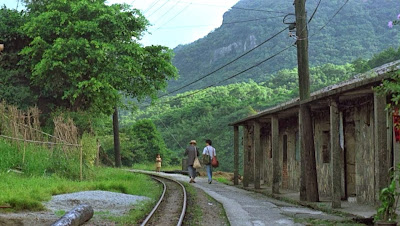 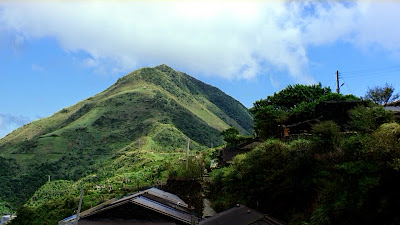 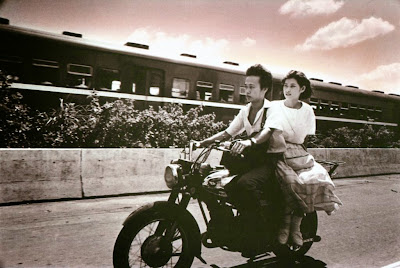 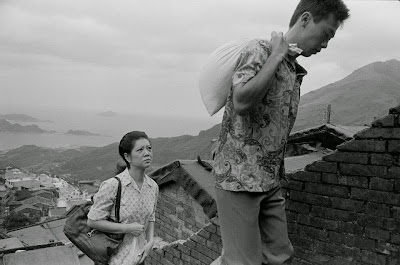 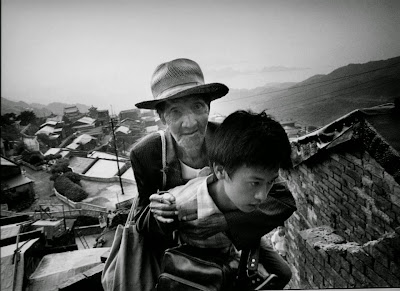 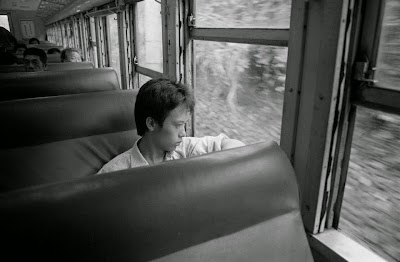 The final installment of Hou Hsiao-hsien's coming-of-age trilogy featuring three different coming-of-age stories by three prominent Taiwanese screenwriters, where A Summer at Grandpa's (Dong Dong De Jia Qi) (1984) was inspired by the childhood memories of Chu Tien-wen, A Time to Live and a Time to Die (Tong nien wang shi) (1985) was inspired by Hou Hsiao-hsien’s own childhood, while DUST IN THE WIND (1986) was written by Wu Nien-jen, who played the father NJ in Edward Yang’s YI YI (2000).  In keeping with the tone of authenticity, each of the three films was shot in the actual childhood home of each writer.  The setting of this film takes place in the picturesque mountain village of Jiufen in the northeast part of Taiwan, which was used again in A City of Sadness (Bei qing cheng shi) (1989), Hou’s first entry into his historical trilogy, where the shot from the mountain to the hillside inlets and cliffs jutting out into the bay below offers a spectacular panoramic vista (third photo shown here:  Two kinds of Hou Hsiao hsien | Notes on The Cultured Life), perhaps the most identifiable, signature shot of Taiwan throughout the director’s career.  This early coming-of-age trilogy is also significant for the director’s initial use of non-professional actors, a key component in establishing a natural style of realism that reflects an unembellished world stripped of all artifice, using extensive improvisation to arrive at the final shape of his scenes, where his film aesthetic is reflected in sparse dialogue with long stretches of silence, long takes and minimal camera movement, where the story advances by the reading of letters, the telling of stories, a change in hairstyle, or barely perceptible shifts in the inner lives of characters.  Unlike films of the West, Hou’s films offer no unnecessary explanation, where the use of close-ups and point-of-view shots are nonexistent, while the key to understanding the poetry of his films is recognizing the rhythm and sequence of his shots, which are often expressed with great visual grace and beauty, most notably through a lifelong collaboration with cinematographer Mark Lee Ping Bin which began in A Time to Live and a Time to Die (Tong nien wang shi), developing a familiarity with the lives shown onscreen, offering insights that can only be obtained through the perception and imagination of an ever vigilant viewer, where Hou’s films are increasingly challenging and unorthodox.

This is a small film which paints a beautiful portrait of impermanence, evoking poetic moods and shifting tides that affect the fate of our lives.  The film is set in 1965 in the small mining town of Jiufen, featuring a gorgeous opening shot sequence of rapidly approaching train tracks seen through the windows of a train as it passes through the darkness of tunnels, exposing the foliage of lush verdant mountainsides.  This is the first of a series of films to star Li Tien-lu from The Puppetmaster (Xi meng ren sheng) (1993) as the aging and eccentric Grandpa, who for the most part improvises his own dialogue, telling original stories that are woven into the fabric of the film, not in narrative but in tone, offering a unique flavor in a cast of non-professionals, including his son’s family and his grandchildren, which includes his teenage grandson Wan (Wang Chien-wen), the stand-in for the writer.  One of the smalltown joys is watching outdoor movies on a giant tarp, like a ship’s sail, where the community collectively meets, yet inevitably the power would go out during the movie.  Hou establishes a rhythm of life reflected in these earlier times, with children playing on the street, neighbors helping one another, where they knew everyone, all captured with extreme calmness, as the 60’s was an era when people left the rural villages to seek work in Taipei, where they knew no one.  Instead of going to high school, Wan joins his girlfriend Huen (Shufang Chen), the hometown girl next door, in Taipei, disinterestedly working odd jobs, living in a loft above an old movie theater with several artists, where one can’t help but think of Tsai Ming-liang's GOODBYE, DRAGON INN (2003).  Hou’s customary cinematographer Mark Lee Ping Bin shoots the first of his memorable table sequences, most notably the opening shot in Flowers of Shanghai (Hai shang hua) (1998), capturing the vibrant energy of social settings that are featured in nearly every film, including one here where a group of friends meet to celebrate the sendoff of a friend joining the army for three years, drinking beer and singing songs over a festive meal, where Huen hesitatingly takes her first drink, then another, causing Wan shame and internal distress, which is shown by his increasingly anxious mood smoking cigarettes.  The passing of time is established by his repetitive visits to Huen where she works as a seamstress, saving money by living on the premises, where she grows distraught when he doesn’t visit regularly, or hear the latest news from her family, as she routinely sends money home.

Ultimately, this is a heartbreaking story of lost love, quite reminiscent of Jacques Demy’s The Umbrellas of Cherbourg (Les Paraplegias de Cherbourg) (1964), where the essential characteristic expressed throughout is a youthful sincerity.  Using trains traveling through a countryside, motorbikes through the streets of the city, or a young man drifting aimlessly through meaningless jobs, the film contrasts the harshness of the country with the equally bleak city life, examining the problems of surviving without an education in an unsympathetic environment.  Without an actual plot or storyline, the director uses a series of vignettes connected by utterly sublime guitar music by Ming Jang-chen where over a ten year time period, people continue to look the same but something in their lives has changed, where doors that open ever so briefly are also quickly closed by a turn of events.  While Huen’s hauntingly quiet beauty represents a purity and innocence of youth, Wan is a very unrefined young man with suppressed emotions, a very closed personality, unlike his grandfather who is often seen sitting outside smoking, where he talks to all the neighbors and doesn’t miss a thing.  The couple is always shown together in the first half of the film, where there are no hugs or kisses, only an established intimacy, but when Wan is drafted into the army, the separation has untold consequences, as Huen begins seeing the postman, eventually getting married, causing a shock to the local families, leaving Wan stupefied from afar, showing how one leaves the carefree moments of youth with a great deal of reluctance, a theme that returns again in MILLENNIUM MAMBO (2001).  Much like Japanese director Ozu, Hou uses transitional shots of telephone lines, railway switches, balconies overlooking the street, train shots through the mountainsides, wash hanging on the lines in alleyways, or street scenes with the inevitable stacks of food lined up, often shown glowing in the dark.  Actually the entire film is composed of transitional shots, like reflections of childhood memories, expressed in the continual railway travels back and forth in their youth or the suspension bridge of Jiufen, where a train passes in the background leaving behind a trail of smoke.  The village is literally set on a mountainside, where one must climb a steep set of stairs just to get there, young and old alike.  Using brief images of landscapes or a quiet, recurring musical guitar theme, the film evokes great sympathy for its characters, using a slow, unhurried style of long takes that captures the hardships and humor of everyday life.  But it’s a frail balance holding it all together, so when a single thread breaks loose, one can easily lose hold of one’s bearings.
Posted by Robert Kennedy at 11:13 AM