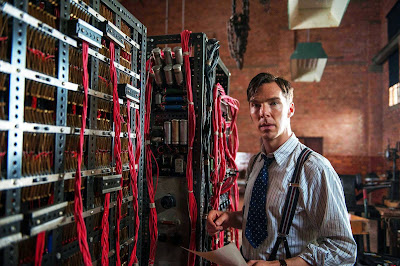 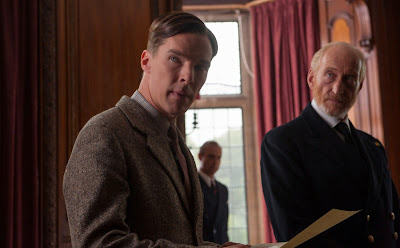 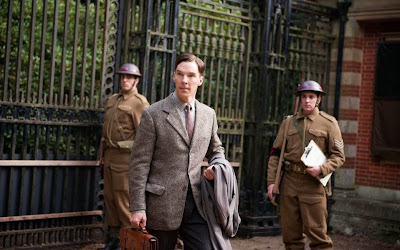 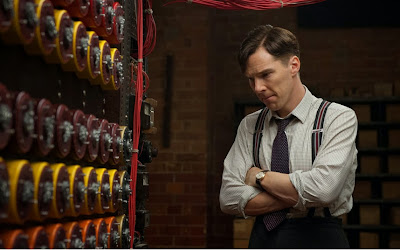 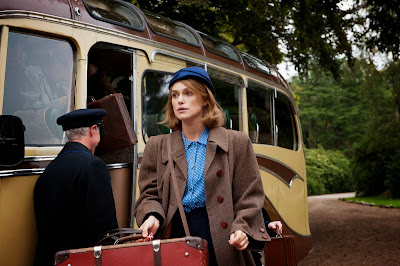 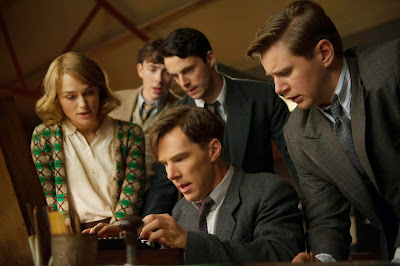 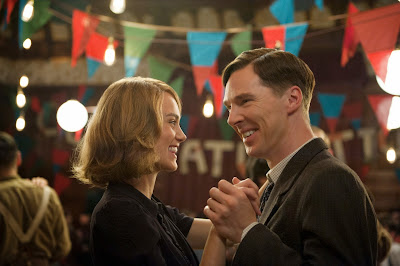 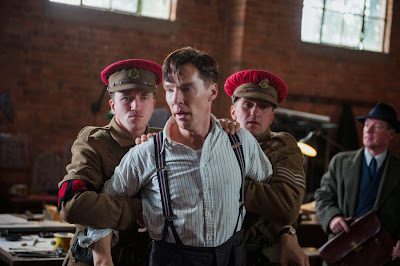 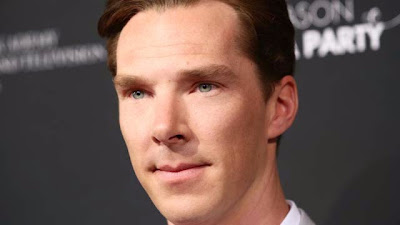 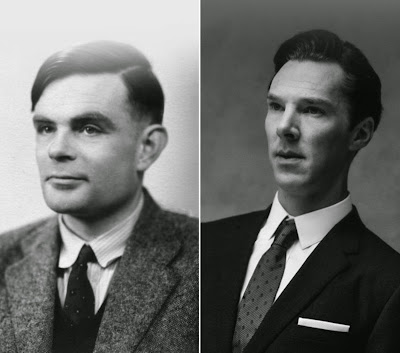 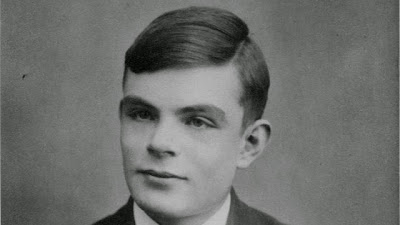 
Sometimes it is the people who no one imagines anything of, who do the things that no one can imagine.


Morton Tyldum is the Norwegian director of Headhunters (Hodejegerne) (2011), a stylish crime thriller running on high octane that treats the audience to a savagely vicious world of unleashed villainy, while here he exposes one of the dark secrets of Great Britain’s past, their ill-advised persecution of the one man that nearly single-handedly invented a machine that decrypted the German messages in World War II and helped the Allies win the war.  While most of us didn’t read about this in our history books, that’s because the information remained classified for the next 50 years.  The subject of the film is the great British mathematician Alan Turing, a brilliantly educated gay man of genius (modestly comparing himself poorly to the academic exploits of Einstein in the film) who devised a number of groundbreaking techniques for breaking German codes.  Winston Churchill said Turing made the single biggest contribution to the Allied victory in the war against Nazi Germany, where historians now believe he may have helped advance the end of the war by two years and in the process save 14 million lives.  Despite his status as a war hero (which was not recognized publicly due to continued government secrecy), Turing was prosecuted for homosexuality in 1952, which remained against the law in Britain until decriminalization in the mid 60’s.  In something out of Kubrick’s A Clockwork Orange (1971), as an alternative to prison, he accepted what amounts to chemical castration by taking female hormone injections, dying two years later at the age of 41 from self-inflicted suicide by cyanide poisoning.  It took until 2009 for Prime Minister Gordon Brown to make an official government apology for “the appalling way he was treated,” while the Queen also granted him a posthumous pardon in 2013.  Based on the Andrew Hodges book, Alan Turing:  The Enigma, which he began writing in 1977, released in 1983, it’s interesting that the book was written by a mathematician, currently a Research Fellow of Wolfson College at Oxford University, where his interest developed from his similar background, but also from his participation in the gay liberation movement of the 1970’s.


Despite his notoriety today, Turing remained a mysterious figure during his lifetime, a man shrouded in secrecy, where MI6 Secret Intelligence Agent Stewart Menzies (Mark Strong) points out he would have been a perfect candidate as a spy, telling him he was exactly the man he hoped he would turn out to be when he recruited him.  The film is told during three periods of his life, his teenage schooldays, wartime service, and his final years in the early 1950’s, continually moving back and forth in time, opening with the scratchy recording of the 1939 radio broadcast of King George VI declaring war on Germany, which is the same speech from Tom Hooper’s Academy Award winning picture THE KING’S SPEECH (2010).  As that film relied upon a superb performance by Colin Firth as the stuttering King, this does the same with Benedict Cumberbatch as the brilliant Turing, where what both films have in common is they are handsome, well-made, informative, dignified, yet also exceedingly bland.  While this is a highly unconventional subject matter, the film itself couldn’t be more safely conventional, where any reference to homosexuality has been so deeply eliminated and hidden from view, mentioned only through coded references, that this could easily pass for a Disney film.  In other words, it helps if you’re familiar with the subject matter ahead of time, as there is little mention of actually “being” gay.  This is a far cry from the dreaded anguished realms of Hell described by impeccably educated, Catholic-bred, fellow Brit Terence Davies in his intensely personal ode to his hometown of Liverpool, Of Time and the City (2008), a much more emotionally devastating work where he bashes the Catholic Church for instilling in him an overwhelming sense of fear and guilt while growing up gay, eventually rejecting the church altogether, where he admittedly now lives an asexual lifestyle.  Turing, unfortunately, never survived to appreciate the benefits of his own tiresome efforts, where he basically invented an initial model for what we now commonly call computers.  Had he survived the socially repressive era of the 50’s, he would be lauded and celebrated on a number of fronts today, and while hardly the definitive Alan Turing film, leaving out huge gaps in his life, hopefully this is not the last word on the subject.


Certainly the main problem with the film is the detached unlikability of the main character as he works in near isolation at Bletchley Park, a secret British cryptography unit at the Government Code and Cypher School that was formed to crack Germany’s Enigma machine code, where despite the horrors that are foisted upon him early in life, including being brutally bullied by others at school, he remains unsympathetic throughout because of the routine way he’s so dismissive of others,  His callous disregard for other people, particularly during wartime when nerves are already on edge from nightly bombings, is beyond offensive and near psychotic.  While the film attributes it to how much smarter he is than others, his hubris and extreme arrogance are symptomatic of deeper psychological problems that are left unexplored.  Instead, the film counterbalances his sneering coldness with a warmhearted figure in Keira Knightley as his sole friend, Joan Clarke, a woman he hires because of her own brilliance in solving puzzles.  But she provides all the social etiquette that he’s incapable of, which includes graciously smiling and being friendly, while Turing criticizes and belittles the ineffectiveness of his coworkers while continually alienating them.  His indifference is reminiscent of Stephen Hawking’s portrayal in The Theory of Everything (2014), who is seen in a much more positive light through the loving eyes of his wife whose book was adapted for the film.  Except for those private moments when Turing is seen with Clarke, he is almost exclusively alone, though the person having the greatest impact on his life was his only friend at Sherborne School, Christopher Morcom (Jack Banner), his first love, where the two were the smartest students in class, but his untimely death from tuberculosis shattered Turing’s religious faith, sparking a career as a mathematician, logician, cryptanalyst, and computer scientist, but also the idea of whether a machine might contain the intelligence of a human being, where he named his code-breaking machine after Christopher, while also inventing the “Turin test,” or “Imitation game,” a series of questions designed to determine whether you were speaking to a person or a “thinking” machine.  Near the end of his life Turing is portrayed as a lone eccentric, having lost all his family and friends, where all that’s left is Christopher looming inside his apartment taking up an entire wall, like a place of worship, or the monolith in Kubrick’s 2001: A Space Odyssey (1968), where the accompanying music by Alexandre Desplat might actually be described as exalting.  Turing’s life was portrayed earlier by Derek Jacobi in a made-for-television movie called BREAKING THE CODE (1996), and who can forget Dougray Scott as the tortured codebreaker in a fictionalized version, with Kate Winslet and Jeremy Northram along for window dressing in ENIGMA (2001), but this Hollywood version with Cumberbatch offering the intellectualized, award-worthy performance will have a much greater impact.  It’s been a banner year for science in movies, with portrayals of real life scientists Alan Turing and Stephen Hawking, and let’s not forget the fictionalized NASA pilot turned space traveler Cooper (Matthew McConaughey) in Interstellar (2014).
Posted by Robert Kennedy at 12:00 AM