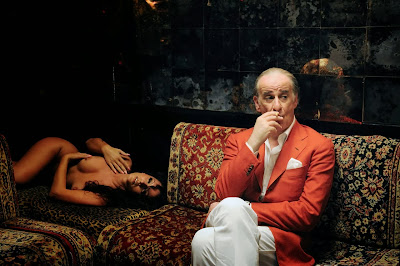 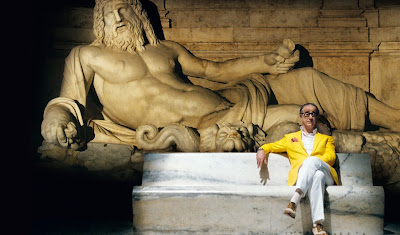 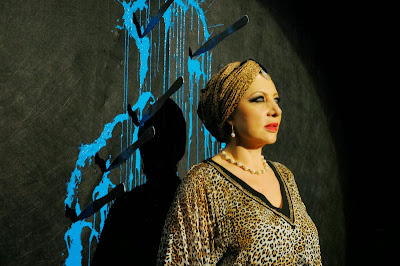 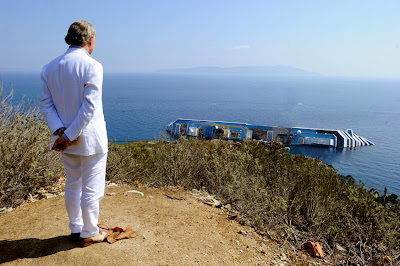 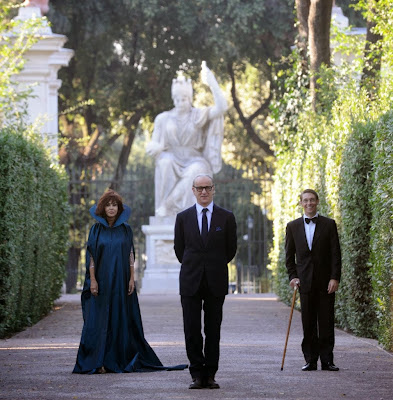 Our life is a journey

Through winter and night,
We look for our way
In a sky without light.
(Song of the Swiss Guards, 1793)


Travel is useful, it exercises the imagination. All the rest is dis­appointment and fatigue. Our journey is entirely imaginary. That is its strength. It goes from life to death. People, animals, cities, things, all are imagined. It’s a novel, just a fictitious narrative. Littré says so, and he’s never wrong. And besides, in the first place, anyone can do as much. You just have to close your eyes. It’s on the other side of life.

—Louis-Ferdinand Céline, Journey to the End of the Night, 1932, Preface to 1952 Gallimard Edition

Like other Sorrentino films, his fifth consecutive to premiere at Cannes, all but one starring Toni Servillo (the other in English starred Sean Penn), this one did not cause much of a splash, where critics have been skeptical and loathe to extend much praise to this creatively gifted Italian director, though his films have been among the most challenging of the era, and certainly seems to be the one director most prepared to extend Fellini’s vision and reach well into the next century.  Driven by the extraordinary talent and lush cinematography by Luca Bigazzi, who has worked on every Sorrentino film, whose elegant tracking shots draw the viewer into Rome’s interiors, this may be his most breathtakingly beautiful effort yet, a film that reveals the ravishing splendors of Rome, accompanied by one of the most sublime musical soundtracks of the year from Lele Marchitelli, which includes Vladimir Martynov’s The Beatitudes - Kronos Quartet - La Grande Bell - YouTube (5:25).  Based on a story written by the director and Umberto Contarello, it’s far more reminiscent of Fellini than any other film in recent history, and recalls the creative challenges of dream, memory, and the crisis of inspiration in Fellini’s 8 ½ (1963), or the sumptuous glory of extravagance and indulgence by the rich where this film is an updated, mirror image of LA DOLCE VITA (1960), a parade of the seemingly chaotic and disconnected events of the city of Rome in ROMA (1972), while also maintaining the unsurpassed classical beauty of Kubrick’s BARRY LYNDON (1975), and the elegant interior life and death struggle of Angelopoulos in ETERNITY AND A DAY (1998).  This sumptuous creation is a glorious and somewhat pompous film about the decadent party going of the idle rich as seen through the eyes of Jep Gambardella (Tony Servillo), who on his 65th birthday remains a central part of the lavish, all-night party nightlife of Rome as he has for decades, see The Great Beauty (La Grande bellezza) - Dancing Scene YouTube (7:53), unsubtitled.  Toni Servillo (at age 54) doesn’t have the flamboyance and sexual charm of a much younger Marcello Mastroianni, who was only 36 as the philandering journalist in LA DOLCE VITA, yet he may be the result of the same Fellini character who has spent the last twenty years in constant party mode, seen here as an eminent socialite who wrote a successful novel in his twenties, The Human Apparatus, but hasn’t written another since, claiming “I didn’t want to simply be a socialite, I wanted to become the king of socialites. I didn’t just want to attend parties. I wanted the power to make them fail,” taking us on a veritable travelogue of Rome, where the immense beauty of an angelic chorale I Lie - David Lang - YouTube (5:03) coming from the ruins is so overwhelming that a Japanese tourist taking pictures literally falls to the ground and dies in an opening segment.  Thus begins an elaborate journey with one eye on his own impending death, walking us through the various locations of his life, with reflections into the past while having passing encounters with various friends.

While the film is somber, reflective, and visually magnificent, a blend of sublime visual beauty and enchantingly gorgeous music that couldn’t be more harmoniously perfect, one of the most beautiful films one could ever hope to see, worth the price of admission in itself, see a wordless montage to the enchanting choral music of Arvo Pärt’s “My Heart's in the Highlands” by Else Torp and Christopher Bowers-Broadbent, La Grande Bellezza - The Great Beauty YouTube (8:24), unsubtitled.  The lack of any coherent storyline is a bit more problematic, as Jep, our jaded tour guide, observes the world with a poetic detachment and a somewhat nihilistic view of life, expressed through an almost unrelieved pessimism and cynical humor, very much in the manner of the Céline novel, which also utters, “As we grow older, we no longer know whom to awaken, the living or the dead,” while also contending “You can lose your way groping among the shadows of the past.”  Nonetheless, as an aging journalist writing a culture column, that’s exactly what he does, taking the viewer on a seemingly imaginary journey through the ancient relics of Rome, walking through the ruins, the magnificent fountains, and the city streets, reflecting on his life, his first love, and his own growing sense of unfulfillment and discontent, even as he lives in a simply stunning apartment overlooking the Colosseum.  Despite his intimate knowledge of the city’s secrets and the entire high society of Rome, it’s his own extravagant lifestyle that slowly begins to crumble before his eyes, bemoaning the lack of “true” beauty in a city spilling over in luxury, endless excess and indulgence, where he blatantly shares his disgust with a neverending stream of his so-called friends and associates, as his ultimate revulsion lies with himself.  And therein lies the film’s Achilles heel, as the bizarre charade of Felliniesque characters adds to a dazzling landscape of surreal spectacle, capturing the seductive, empty hedonism of the Berlusconi era where the upper income 1% revel unapologetically in the obscenity of their wealth, but Jep’s utterly aloof and deep melancholic detachment from it all is expressed through a dour and everpresent gloom, rarely appealing emotionally, where he proudly declares he’s “a misanthrope not a misogynist.”  As he explores the great questions and existential meaning of life, it’s difficult to find an entry point into this all-consuming surface reality of immense Italian mansions and luxurious wealth on display, as the city’s ancient beauty and poetry overwhelm, and can be euphoric, but any sign of humanity in any of these characters is non-existent.  There is one exception, however, a singular, stand alone moment in the film where Jep crosses paths on an outdoor staircase with an unidentified woman (Fanny Ardent), where both greet one another with an infectious smile, as if they’ve known each other for years, offering a brief window into warmth and humanity, before continuing on their separate paths.


Something of a modern day version of Fellini’s fall of Rome, the story of a man who hasn’t a real problem in the world, who eventually owns up to his own superficiality, where we hear a pretentious party reveler proclaim “I only listen to Ethiopian jazz,” this is a virtuoso piece of filmmaking, part character study, part impressionistic mood piece, where characters aren’t living their lives so much as they are constantly performing, as if all eyes are always upon them, where nearly every one of Jep’s pampered friends burns out or suffers a profound loss as they abandon themselves to one sin after another, where even the church is not exempted from this exhaustive display of fraudulent self-indulgence.  A saintly Mother Teresa figure who has taken a vow of poverty cannot speak of it, as words cannot adequately express even the poverty of the soul, where she can only perform seemingly meaningless acts of attrition, seen at age 104 crawling up an endless staircase, supposedly a redemptive act, but no more beneficial in the wide scheme of things than the endless all-night parties that are equally pointless, where Jep dances in a snake-like conga-line called a train, observing “You know what I like about the train?  It goes nowhere.”  Seen as a humorously satiric essay on nostalgia, where one of Jep’s oldest friends is another aging poet Romano (Carlo Verdone), who exclaims “What’s the matter with nostalgia?  It’s the only thing left for those of us who have no faith in the future.” While Fellini’s 60’s films expressed an unbridled enthusiasm, filled with excitement and a positive look to the future, today there is a spiritual void, as the world lacks positive energy and any deeper meaning.  Perhaps the only open door with a look to the past as well as the future is the world of artistic expression, which is the architectural foundation of this film, as art has a way of constantly getting under the surface, continually probing areas deeply connected to human feelings and emotions.  One of the best scenes in the film comes near the end when Jep visits a man whose home is a photo exhibition, displaying photos taken of him each and every day both as a boy and a young man, the accumulative effect of which is truly moving, where Jep is touched by what he sees, as the photographs have a way of evoking powerful emotions.  In much the same way, while he satirically outlines the proper rules of etiquette for a high class funeral, he violates his own rules when he’s genuinely moved to tears.  Without discovering any religious or philosophic revelations in his life, the film offers windows into Roman life that may only be understood by a fellow Roman, where perhaps the major discovery is art itself, as only then can we capture the aesthetic pleasures, deeper meanings, and true nature of beauty, an elusive quality seen here as la grande bellezza, taking us on a journey that continues right through the final moments of the end credits, La grande bellezza sigla finale YouTube (7:29).
Posted by Robert Kennedy at 12:05 AM