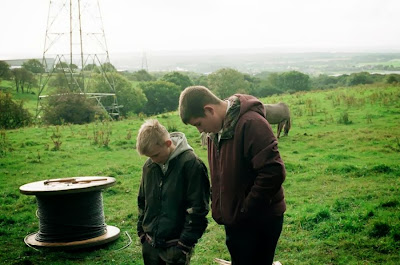 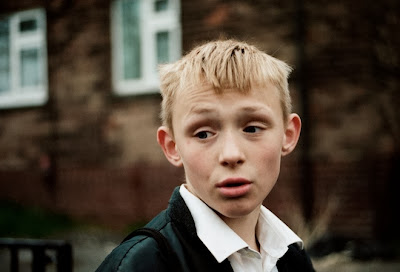 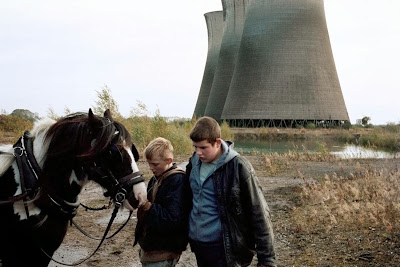 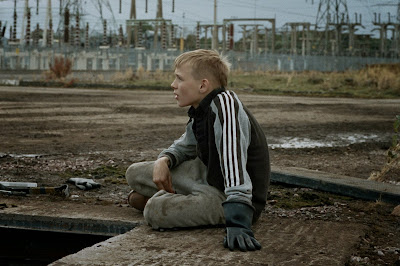 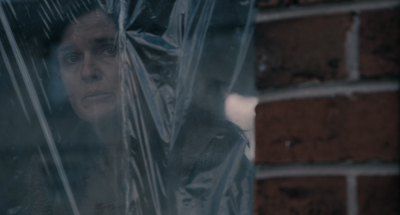 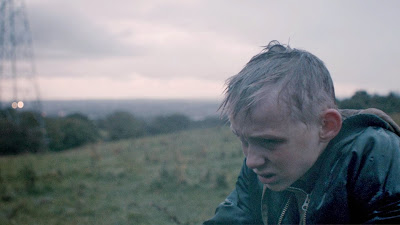 
In Clio Barnard’s extraordinarily original first feature, 2011 Top Ten Films of the Year #4 The Arbor (2011), a unique study of the life of British playwright Andrea Dunbar, who died in 1990 at the age of 29, where the film extends the boundaries of documentary filmmaking, becoming a word play based upon actors lip-synching 90 hours of audio interviews Barnard conducted with Dunbar’s family and friends, a haunting and disorienting fusion of fact and fiction extending the artist’s tragic life into the lives of her own children, where Dunbar’s alcoholism gave way to the heroin and crack addiction of her daughter.  The director’s highly unorthodox technique accentuates the artifice of filmmaking, showing the camera and crew, exposing what the audience normally doesn’t see, using fictional methods to unravel the hidden inner truths of the artist.  Barnard grew up in the town of Otley in Yorkshire, just a half hour away from Dunbar’s home of Bradford, where she’d often go ice skating or see musical bands as a child, as her dad was a university lecturer teaching English, mostly the Romantic poets, while her mother was a jazz singer, with her parents separating at age 6, where she grew up with her dad, attending art school at Leeds, Newcastle, and then Scotland, eventually becoming a video artist with installations in art museums around the world with a healthy skepticism about the cinematic misrepresentation of realism.  Now a teacher of film studies at the University of Kent, in her second feature Barnard has embraced the same social realism she critiques so fervently in The Arbor, writing a script inspired by an Oscar Wilde children’s story about a bad-tempered giant that won’t let children play in his idyllic garden, turning it into a perpetual winter, becoming a searingly realistic piece about a young boy named Arbor, where he and his best friend have a falling out, both exploited by an unscrupulous scrap metal dealer, where they are introduced into the harshly brutal working conditions of adults, ostracized and excluded children pushed into the outer fringes of society where something has gone fundamentally wrong, victims of an ever widening gap of economic inequality, forced to endure the horrible dangers of child labor all over again due to an insatiable capitalistic greed that so willingly puts children at risk.


The story is loosely based upon a living reality, through an actual young boy named Matty that Barnard met while shooting The Arbor, as he kept getting into the shot while riding his horse, a scruffy kid wearing dirty clothes that exhibited a kind of “fuck you” attitude against others.  At times he would show up with his friend Michael, both outsiders who survived by any means necessary, where they spent their days scavenging for scrap metal in Bradford, which is one of the thriving businesses in the city, calling into question whether they were being exploited by the scrap merchant or getting an opportunity.   Barnard recalls meeting his mother who told her “What the hell else is he going to do around here?  At least he’s earning some money.”  His continual presence on the movie set eventually turned into the character of Arbor, named after the street where Dunbar lived, showing how life has a common stream–of-conscious thread that connects us all together.  Using two non-professional child actors who are onscreen in nearly every shot, the film is set in an oppressive Dickensian world of poverty, exploring the close friendship that develops between two boys who both come from dysfunctional families, with no working parents and no adult role models, whose families are barely getting by, who are teased and bullied by others who are less marginalized, but these two kids share a common bond of both being outsiders where they at least have each other.  Arbor (Conner Chapman) is the more impulsive of the two, smaller, louder, openly defiant of authority, and emotionally unpredictable, requiring medicine for his hyperactivity, while Swifty (Shaun Thomas) is more an easy going big brother, a kindhearted kid who seems to follow the lead of Arbor, remaining his most loyal friend and protector, even during troubled times.  Their relationship is reminiscent of John Steinbeck’s Of Mice and Men, which was similarly set during the economically challenged times of the Great Depression, but here failed industrialism is a remnant of a once thriving past in Bradford, where the economically abandoned town is drained of any possibilities of hope.


Arbor has violent temper issues, is prone to fighting, and is quickly expelled from school, Swifty, his sidekick, along with him, where Swifty’s parents insist he not be a layabout at home, so they send him to school, despite his expulsion, where he can only spend his days sitting in perpetual detention.  This perfectly expresses how society deals with troubled kids, as they make no attempt to deal with or treat their problems when it’s so much easier to simply rid themselves of the problem altogether, leaving kids on the margins to fend for themselves where they have no resources.  Abandoned by their schools and by their families, few good options await them, and society eventually pays a price.  The one place where they can receive money is the morally dubious scrap iron dealer, Kitten (Sean Gilder), who runs a black market business on the side and becomes the only adult who actually seems to care about these boys, becoming their surrogate guardian, encouraging them to work harder, which is another way of exploiting them for cheap wages, showing them how they can burn away the traces of stolen copper wire, which puts them in ever more precarious situations of having to steal wire right under the noses of working electricians.  While Swifty has some notion of the hazards involved, Arbor is relentlessly fearless, developing a greedy and insatiable appetite for more, showing a daredevil streak that tends to get them both into trouble.  For that reason, Kitten seems to favor Swifty, allowing him to borrow a horse and cart to pick up and carry heavier items, where he doesn’t trust the more hot-headed Arbor, who flies off the handle at any given moment, driving a wedge between them.  One of the illicit activities is harness racing these animals down the auto roadways at dawn, where trucks and cars are driving right alongside the horses with drunken spectators leaning out the windows attempting to influence the outcome of the race, hoping their noise will be a distraction, turning the race into something of a thrilling spectacle.


Unlike The Arbor, which was shown with subtitles, this film did not, so nearly half the dialogue, despite being spoken in English, is incomprehensible.  This may alter one’s appreciation for the film, as much of the written poetry is lost, but the audience has a feel for the spirit of the language, where illiterate youth and the profoundly uneducated from impoverished communities have a way of wrapping their regional dialogue in slang, gutter talk, and profanity, all of which further alienates them from the mainstream.  One of the most haunting recurring images is seeing how humanity from a dilapidated tenement housing project swells into close proximity to a cluster of five nuclear power smokestacks, as they did in THE RED RIDING TRILOGY (2009) which was also set in Yorkshire.  When Arbor and Swifty get away from it all, they wander into a pastoral green field containing an endless stream of giant electrical transmission towers, inhabitants of a veritable wasteland that extends into the horizon.  These toxic images have a life force all their own, seen as a monstrous looming presence hovering off in the distance, continually threatening to have a major impact.  While the film is about a boyhood friendship that rises out of the depths of poverty and despair, it’s also about loss, where to their mothers these boys are lost children pushed beyond their control, where that feeling of loss permeates over everything that happens by the wrenching finale, which expresses an all consuming despair not seen since the end of Brokeback Mountain (2005), or the melancholic The Sweet Hereafter (1997), where the near wordless images beautifully comment on everything that came before, altering our view of their friendship and the connecting families in the community, providing additional meaning to what feels incomprehensible, where the bleak devastation of dire poverty has rarely been expressed with such poetic eloquence.  The film is about what happens when society ignores cries for help, where the inevitable tragedies that occur will haunt and literally redefine people’s scarred lives.  A remarkably intelligent work of rare insight and daring, shot with visual acuity from cinematographer Mike Eley, Barnard examines the effects of postindustrial England with stark realism, where with utter compassion, and never pity, Barnard literally shames a nation to rediscover its own rich heritage and humanity.


Short Stories: The Selfish Giant by Oscar Wilde - East of the Web  complete text of the story
Posted by Robert Kennedy at 12:04 AM