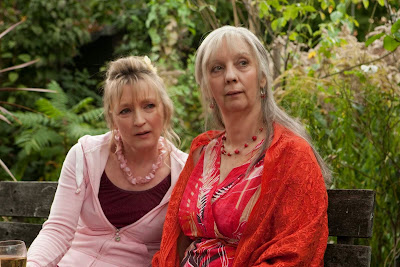 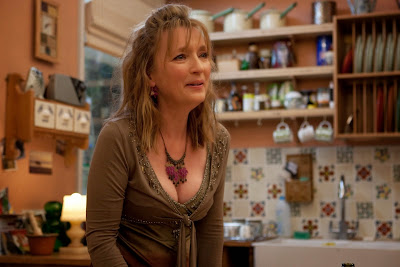 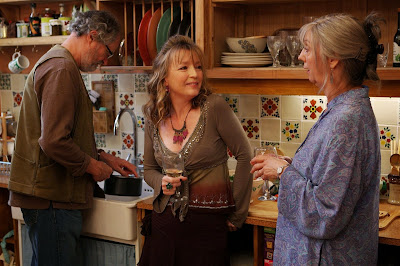 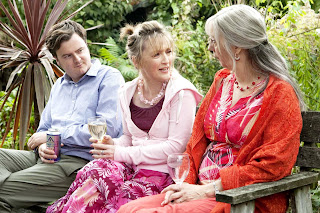 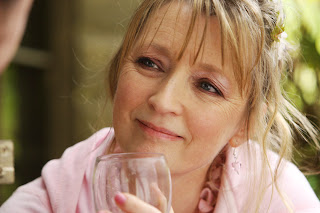 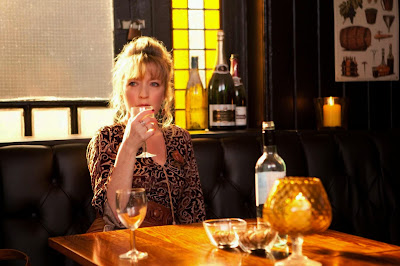 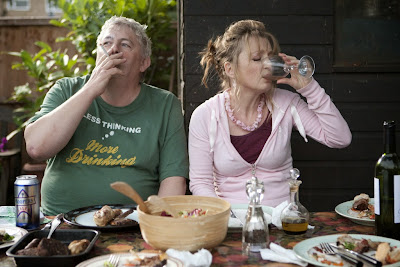 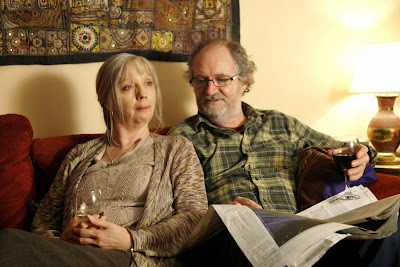 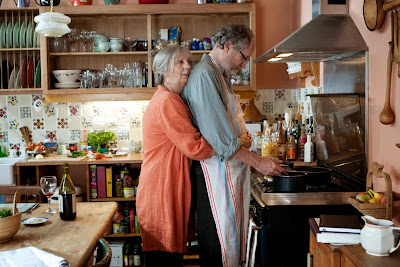 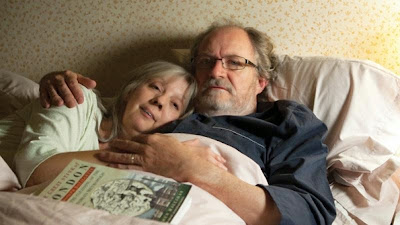 It’s interesting how, over the years, Mike Leigh has continued to utilize new faces as his leads, pulled from among his staple of performers, almost as if he’s rotating the importance of their roles.  Ruth Sheen and Lesley Manville, faces we recognize as they are among the most loyal in his entire troupe, have finally been given prominent roles.  Jim Broadbent (4th film together) goes back to LIFE IS SWEET (1990), while Ruth Sheen (5th film) and Lesley Manville (6th film) go back to HIGH HOPES (1988).  This film centers around the stable lives of suburbanites Tom and Gerri, Broadbent and Sheen, both working professionals who earn a comfortable living, as much of the film takes place inside their home.  Added to the mix is the harried and unsettled life of Mary (Manville), a woman who works as a secretary in the same building with Gerri but who’s always in a state of flux, a heavy drinker who’s desperately in need of getting into someone’s ear where she can blab with the best of them.  Mary is a vulnerable and sympathetic figure who wears her heart on her sleeve while being affectionate and overly man friendly, but is younger and lacks good judgment, making rash, impulsive decisions which contrasts with the polish and sophistication of the married couple who simply lead more orderly lives, which usually requires hearing the latest disasters that Mary continually finds herself in.  Nonetheless, there’s a somewhat breezy tone set by the ease of conversation that flows when they’re together.  This is countered by the dour opening sequence featuring the familiar face of Imelda Staunton, stonefaced here as a woman who is seeking medical help for sleepless nights.  When she’s referred to a counselor (Sheen), it’s clear she’s so set in her ways that she couldn’t possibly budge an inch either way if she tried.  When asked to rate how happy she is from 1 to 10, she immediately identifies with a 1, knowing there’s absolutely nothing she can do about it.   While the opening is pronounced and starkly bleak, it quickly settles into the more comfortable conversations typified by backyard gatherings where the flow of food, wine or beer keeps the guests happy.


The structure of the film is told with the passing seasons, broken by a familiar scene of Tom and Gerri spending their afternoons tending to their section of a communal garden, where they’re constantly bringing new vegetables to plant, an outdoor hobby they obviously both share, bringing rubber boots as they’re up to their knees in mud.  Like a greatest hits album, the progression of the year is shown through the careful selection of a few scenes from each season, where with scant narrative detail, relationships change, as we see someone fall in love, someone die, or someone have their hopes dashed.  Behavior is noticeably different, where the audience is treated to the development of character through long sequences, as lives unfold before our eyes in real time.  This is not one of Leigh’s more deeply intense and troubling films, as there’s a jovial and lighthearted atmosphere with plenty of broad humor, but it’s surprising how much depth he’s able to squeeze out of ordinary lives, where the points of view of the characters shift radically over time, oftentimes beginning with subtle shifts of tone which have more serious ramifications through the passage of time.  Little things escalate and become overwhelming obstacles when seen from someone else’s point of view.


The audience may laugh at the easy going nature or apparent silliness of an earlier scene, where the laughter turns to pathos when seen later in a different context, when the effervescent smiles have changed dramatically to quiet stares, accompanied by an emotional paralysis, where the easy earlier flow of conversation comes to an abrupt stop.  These are literally scenes that may leave the audience speechless, as the razor sharp precision of Mike Leigh’s sleight-of-hand theatricality hasn’t lost any of its depth or profundity.  This is simply a subtler version of what we’ve seen before, where the age of the characters onscreen may have something to do with it, where ordinary lives change dramatically, oftentimes without the slightest notice, where by the time one figures it out, it’s probably much too late.  In fact, the entire tone of the film turns on that final shot, which brings into question the supposedly kindly motives of Tom and Gerri, now seen strictly as snobbish professionals, unlikable people really who don’t have the same patience anymore for someone like Mary, who is seen as a nuisance from a lower class who never seems to get her harried life in order.  This is Chekhovian drama without the fireworks, but these characters onscreen are completely familiar to us by the finale, and when Leigh slows down the pace to a glacial crawl, eliminating all the superficial frivolity, the emotional impact is devastating, paralleling that opening sequence with Imelda Staunton.
Posted by Robert Kennedy at 12:00 AM