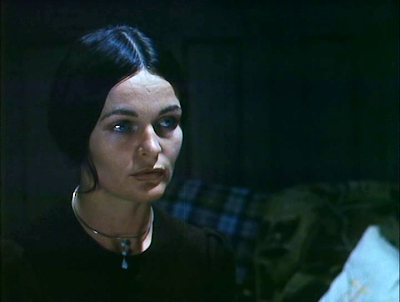 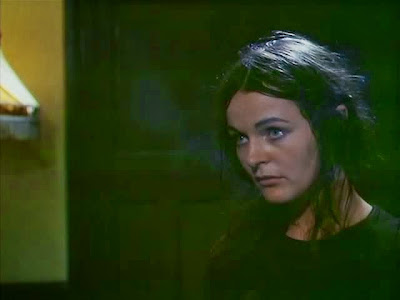 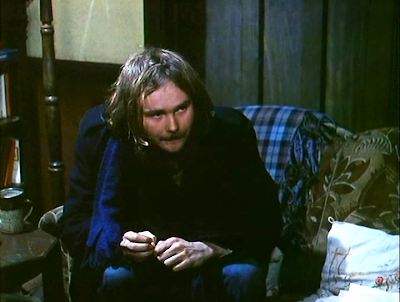 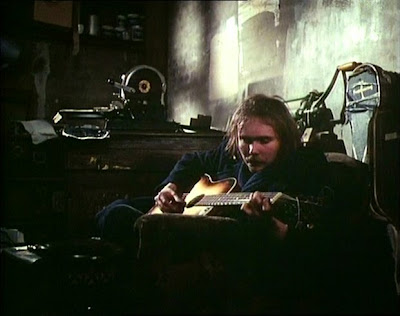 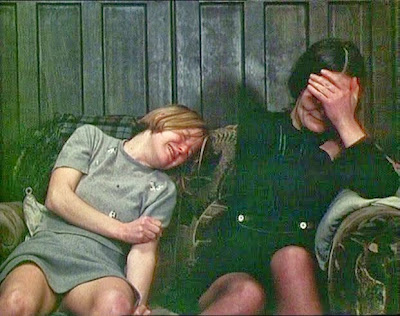 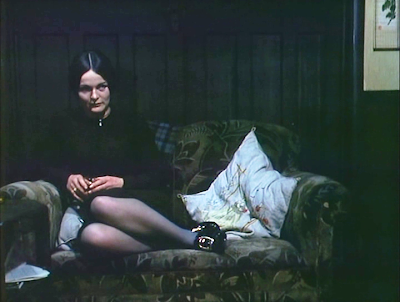 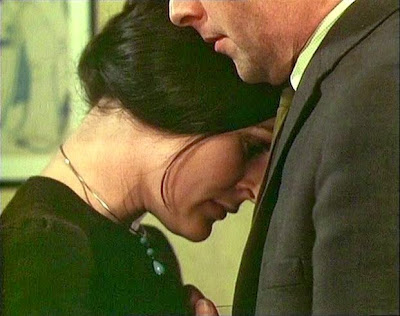 
It is hard to get on a London bus or listen to the people at the next table in a cafeteria without thinking of Mike Leigh.  Like other wholly original artists, he has staked out his own territory.  Leigh’s London is as distinctive as Fellini’s Rome or Ozu’s Tokyo.
—Ian Buruma from The New York Review of Books, January 13, 1994


While the British are known for their mannered reserve, this film accentuates how their repressed politeness veers towards social dysfunction in a series of bizarre and awkwardly uncomfortable moments, where the effects of prolonged isolation leave one ill equipped to adjust to the changing world outside, where this becomes a challenging portrait of lost and lonely souls that feel out of place and out of time.  Of particular interest, this work stands apart from the rest of the director’s work as it would be 17-years before Leigh would make another feature film, spending his time in theater and television, a time when British cinema almost ceased to exist, or, as Leigh describes, it “was alive and well and hiding-out in television, mostly at the BBC.”  Defined by his fiercely independent minded and individualistically creative working methods, as evidenced by his painfully intimate character studies, Leigh’s signature style is already evidenced in this early work, where characters are only developed after months of rehearsal.  Impressed by the improvisatory working methods of John Cassavetes in Shadows (1959), where “The world of the characters and their relationships is brought into existence by discussion and a great amount of improvisation —that is, improvising a character.  And research into anything and everything that will fill out the authenticity of the character.”  It is only through this relentless rehearsal process that a script can take shape, integrating actions and dialogue, as only then does the writer/director understand what characters he’s dealing with, where he likely has specific actors in mind to play these parts.  Mike Leigh was trained at the Royal Academy of Dramatic Art, also a succession of art schools before finally studying cinema at the London Film School.  By the time he arrived in London in the early 60’s, he rejected much of his classical training with a newfound interest in a combination of discipline and improvisational theater, distancing himself from the typical melodramatic excess that came before, preferring to develop a more natural and unglamorized voice of authenticity.  Whether it be his published plays or his films, they have all “evolved from scratch entirely by rehearsal through improvisation.”


Leigh initially works one to one with each actor, usually revealing only what’s essential for that character to know, so in this manner each actor is responsible for developing and transforming their own character, pitted against others in intensive rehearsals, not knowing what other actors have similarly been informed, while Leigh is responsible for integrating the various characters into a storyline.  By whatever measure, his methods certainly bring results, as his cast lists have included several of Britain’s finest young actors, many of whom have done some of their best work for him.  Plot is secondary to character development, where in his initial film characters may appear like wandering souls, often sharing the same space, but there’s precious little shared understanding.  This distance between characters is actually the focus of the film, as it hones in on awkward pauses or prolonged silences, where the forced nature of the conversation actually covers up the real underlying feelings and emotions, where honesty is continually thwarted from being expressed, remaining off limits and hidden from view.  It is only in the painfully repressed expressions written on the faces that the audience begins to understand the unique nature of this film.  An American equivalent might be British director Peter Yates’ minimalist American film JOHN AND MARY (1969), a much more upbeat and socially sarcastic film about a one-night affair, where two strangers meet in bed the next morning, not even knowing each other’s names, but they’re desperately afraid to reveal just how uncomfortable they are, where everything coming out of their mouths feels like it was spoken by another person, a diversionary attempt to discover their own elusive sense of honesty.  Spare and unsettling, often feeling more like unvarnished fragments than a symbiotic whole, without a thought towards “entertainment,” Mike Leigh’s first feature began as a play, with the five central characters in a single room, and would never have been made into a film without a generous donation from Albert Finney, becoming one of the film’s producers, but the story was expanded through Leigh’s working methods, where there’s plainly an uncomfortable disconnect with the audience, a stark portrayal of human isolation, as the film highlights how supposedly ordinary people in British society are simply incapable of communicating with each other.


Leigh’s film is basically a painfully realistic snapshot of a moment in time, opening over the credits with the melodious sounds of an out of tune piano, where Sylvia (Anne Raitt) is stuck in a state of emotional paralysis with no room for growth, sharing her suburban home with her mentally disabled sister Hilda (Sarah Stephenson), where she is saddled with providing full-time care for her, often spending her evenings sipping glassfuls of sherry, while also working a dead-end job as an accountant’s secretary, having little or no time for anything else.  Sitting across the desk from the perpetually smiling and somewhat ditzy world of her coworker Pat (Joolia Cappleman), she listens to her weekend adventures, imagining the world through someone else’s eyes, but Pat’s about as far removed from reality as Sylvia, living a claustrophobic existence with her mother (Liz Smith), both continually harping on minor details while getting on each other’s nerves.   Sylvia’s world alternates between brief moments with two men, the always well dressed, erudite, and overly polite Peter (Eric Allen), a young school teacher who waits for her on the way to work each day, and a shy and scruffy lodger Norman (Mike Bradwell), with his nervous laugh and inability to make eye contact, who rents space in her garage supposedly to print magazine leaflets, but he spends more time playing guitar and singing folk songs in his idle time, heard here singing “Freight Train” Mike Leigh / Bleak Moments "The Cocaine Song" YouTube (2:35).  Sylvia invites Norman inside for a cup of tea, where Hilda loves to hear him play.  There are two signature scenes, one is an afternoon tea party that Sylvia arranges with all the principles invited, where they sit around politely with absolutely nothing to say to one another, as they are instead seen nervously staring at the floor or fidgeting with their cups, where the suffocating atmosphere is further heightened by close ups on everyone’s faces, each one embarrassed by the intrusion of the camera into their private space, while the other is a date with Peter that is a disaster in the making.  Taking place in a nearly empty Chinese restaurant, with a single customer in the corner who delights in staring at them the whole time, the couple can’t seem to find their way with the menu, especially when the waiter has no patience for their stumbling style, reducing every offering to a number, trying to simplify what is taking them forever to decide.  Peter only grows more irritable by the rudeness of the waiter (which may explain the emptiness of the restaurant), filling the air with a feeling of discomfort, where the deafening silence and the stares from the corner only makes them more self-conscious and ill at ease.

This excruciatingly gloomy date is intercut with by an even more grotesque scenario, as Pat brings Hilda over to her home, where both Pat and her mother vie for Hilda’s attention.  Pat treats Hilda like a play doll or a pet, where she’s constantly trying to entertain her and win her affections, like she’s still a baby, while her mother, who appears bedridden, is more natural and just says whatever comes to her head.  But Pat drives her mother batty by snatching up her artificial teeth sitting on a nearby bedside table and placing them in a box, claiming they shouldn’t be sitting out fully exposed in front of company, claiming this isn’t polite, while her mother screams for her teeth.  All their frustration only upsets Hilda, who can’t comprehend all the fuss.  By the time Peter returns back home with Sylvia for coffee, she decides a little sherry is needed as well, and keeps the drinks coming, at one point refilling his glass against his stated wishes, where we think he might be on the verge of apoplexy from the tension in his face.  Nonetheless, he behaves like a perfect gentleman, even as he polishes off his drink and Sylvia all but invites him to bed, “I was just saying something to you in my head... I was saying... take your trousers off.”  This blunt expression is evidently more than he can bear, so instead they share a quiet kiss before he dashes out in a flash of panicked relief.  Her attention turns to Norman in the garage, whose manner couldn’t be more opposite, singing some delightfully silly song about marijuana, but he’s excited about an evening in the West End, leaving Sylvia alone to contend with her thoughts.  When Norman moves out shortly afterwards, as the magazine plans are a bust, the emptiness of her life feels complete, as she’s completely boxed in with nowhere to go.  She amateurishly picks out single notes on the piano, feeling very raw and primitive, before turning into the recognizable melody of “Freight Train,” where it’s evident even these painfully uncomfortable moments are preferable to solitude. The film caught the eye of film critic Roger Ebert, rogerebert.com [Roger Ebert], who wrote “This film is a masterpiece, plain and simple,” while also winning the Gold Hugo for Best Film at the 1972 Chicago Film Festival.  In a Sight and Sound British essay on Leigh, Andy Medhurst remarked:  “This England is specific, palpable and dire, though aspects of it are at the same time liable to inspire a kind of wry resignation. . . . If anything, Englishness is revealed as a kind of pathological condition, emotionally warping and stunting, to which the only response can be a kind of damage limitation.  What many of Leigh’s films suggest is that to be English is to be locked in a prison where politeness, gaucheness and anxiety about status form the bars across the window. . . . His best films (Bleak Moments, Grown-Ups, Meantime) exemplify his skills as a choreographer of awkwardness, a geometrician of embarrassments, able to orchestrate layers of accumulated tiny cruelties and failures of communication until they swell into a crescendo of extravagant farce.”
Posted by Robert Kennedy at 12:00 AM