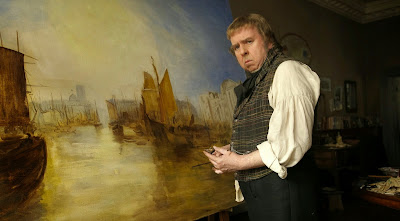 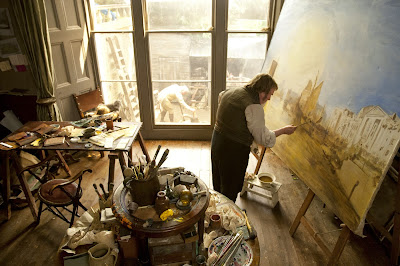 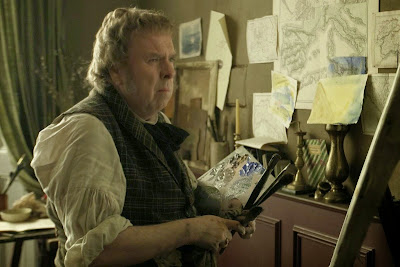 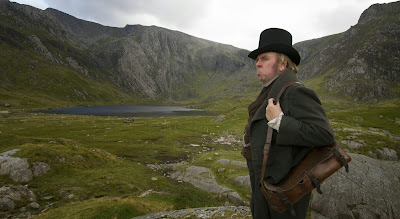 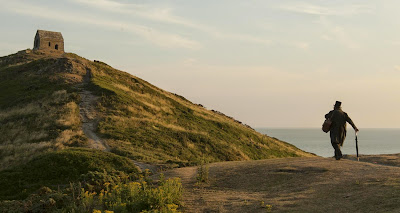 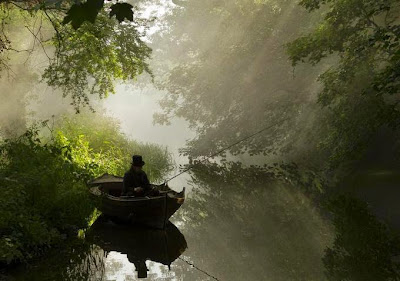 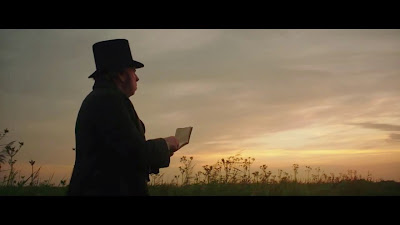 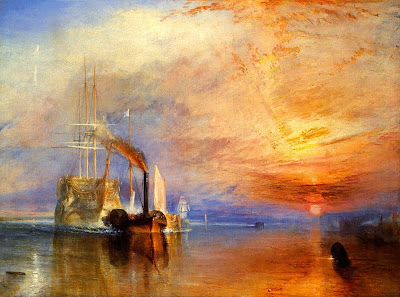 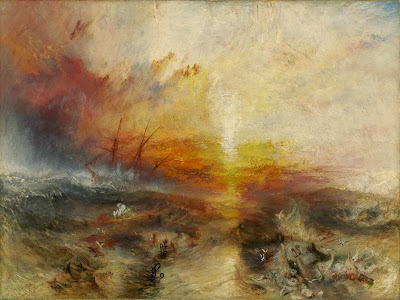 The Slave Ship (Slavers Throwing Overboard the Dead and Dying, Typhoon Coming On), 1840

Aloft all hands, strike the top-masts and belay;
Yon angry setting sun and fierce-edged clouds
Declare the Typhon’s coming.
Before it sweeps your decks, throw overboard
The dead and dying – ne’er heed their chains
Hope, Hope, fallacious Hope!
Where is thy market now?

Like other works featuring pre-occupied and thoroughly unlikable protagonists, such as the Coen brother’s Inside Llewyn Davis (2012) or Bennett Miller’s Foxcatcher (2014), this is a hard sell, even to viewers drawn to the artistry of Turner, as this is no flattering portrait, but instead appears driven to debunk any thought of heroic nobility in his character, where he sleeps in his clothes and paints all day, accentuating his crudeness in social company, where he is hardly a gentleman, as the lewd behavior on display in his personal life is diametrically opposite the shimmering beauty reflected in his paintings.  Frederick Wiseman’s recent film National Gallery (2014) includes a lengthy discussion about one of his earlier works, The Decline of the Carthaginian Empire, 1817, see Original, where Turner as an artist is depicted in particularly reverential language.  At least part of the problem here may be gleaned from Turner’s biographer, A.J. Finberg, who found the subject something of a bore, admitting privately the difficulty he had trying to find what drove the artist, as he was a private man who didn’t lead a particularly eventful life, appearing to be such an ordinary man, “The real trouble is that the only interesting thing about him is that he was the man who painted Turner’s pictures … [He] is only the unimportant nexus that binds the work together.”  Unlike John Constable (1776 – 1837), at the time his rival as the greatest of all English landscape painters, Turner was never educated formally and was barely able to express himself clearly even in the simplest business correspondence, yet early on he often attached to his exhibits quotations from his own particularly gloomy epic poem Fallacies of Hope.  The rivalry with Constable is evident during a mocking scene at the Royal Academy of Art, where the summer exhibition on display shows how paintings are literally all squashed together with barely an inch of wall space between them, which Turner describes as a veritable “cornucopia,” as various styles inevitably clash with one another, where he dabbles some red paint, the prominent color in Constable’s nearby painting, on one of his own completed canvases, where viewers nearly swoon in disbelief, hardly realizing the enhancement.  Queen Victoria was not an admirer of his works, calling them “vile,” and “a yellow mess.”  Due to the uneventful and anti-hero depiction of the protagonist, the film is one of Leigh’s least emotionally engaging works, something his other films are known for, even as he introduces Marion Bailey (the director’s real-life partner), who may actually be the best thing in the film as the last object of his affection, the warmhearted and pleasantly lucid owner of a boarding house in the seaside town of Margate he frequently visits when taking trips into the countryside.  Even she, however, cannot elevate the aloofness and often unconcerned nature of the material.

Budget limitations reportedly prevented Leigh from covering Turner’s career-defining visits to Europe, especially Venice, and instead created a narrower focus on various domestic settings at home in England.  Of special significance, Turner turned down the offer of a millionaire who wanted to buy his entire collection, deciding instead to bequeath the entire British nation with his collections, giving them away to the public who could enjoy his paintings for free.  When Turner died, his will was contested by the family he refused to recognize, amassing a fortune of over £140,000, citing more than 19,000 drawings and sketches in pencil, including about 300 colored drawings, leading to a long, protracted court battle, though the works of art contained in his own house became the public property of the nation under the care of the National Gallery of London, which currently lists nearly 32,000 of his recorded works.  Eleven sketchbooks were belatedly discovered in Turner’s house, including some that were made for his lectures as Professor of Perspective at the Royal Academy, while five containing “material of an erotic nature” were deliberately set aside early on by the court.  His bicentennial was celebrated in 1975 by a vast exhibition at the Royal Academy, comprising some 450 works, while in 2009 – 2010 the Tate Gallery in London and Grand Palais in Paris celebrated “Turner and His Painters,” retracing the artist’s evolution and personal vision.  In 2011 – 2012, the National Gallery featured a major exhibition of Turner alongside 16th century Italian painters Titian and Leonardo da Vinci, as well as 17th century Dutch Masters Rembrandt and Johannes Vermeer.  Turner’s stature as an artist has never been greater, where today this seemingly borderline inarticulate man is viewed not only as a man out of his time, but a true visionary, arguably the finest painter and one of the greatest artists in British history.
Posted by Robert Kennedy at 12:00 AM