The Tale of the Princess Kaguya (Kaguyahime no monogatari) 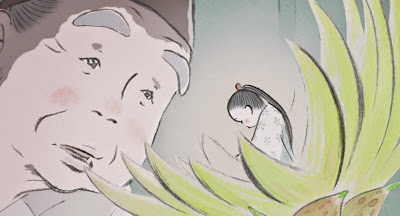 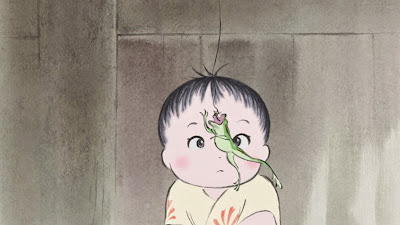 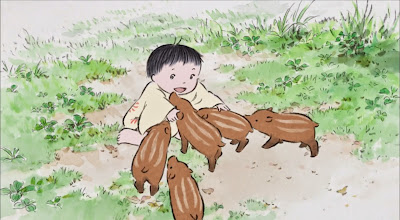 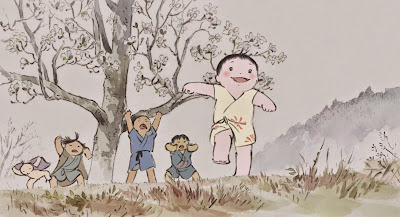 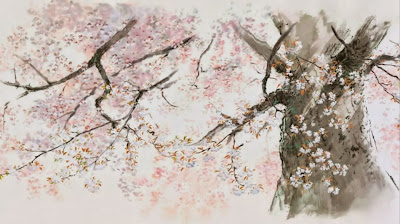 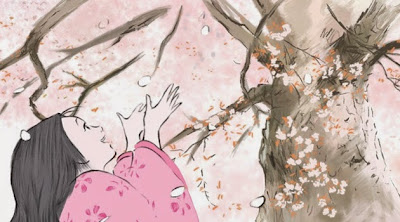 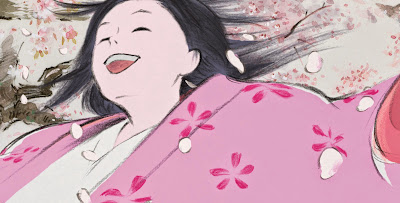 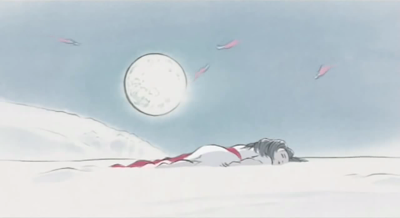 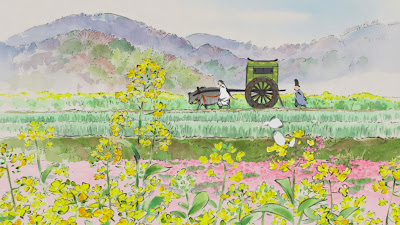 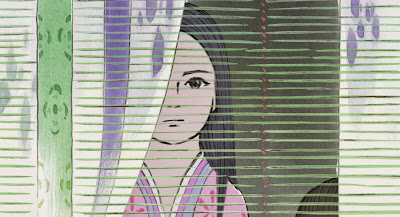 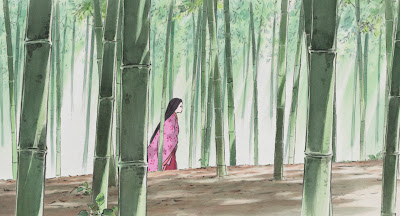 
Isao Takahata and Hayao Miyazaki are the co-founders of the Japanese animation production company, Studio Ghibli, in June 1985, where eight of Studio Ghibli’s films are among the 15 highest-grossing anime films made in Japan.  Unlike Miyazaki who is an extraordinary manga artist and anime illustrator, Takahata does not draw and never worked as an animator before becoming a full-fledged director, though both worked together and had long careers in Japanese film and television animation.  The studio is known for a strict “no-edits” policy, where rumor has it a Studio Ghibli producer sent an authentic Japanese sword to Miramax co-chairman Harvey Weinstein after contemplating edits to PRINCESS MONONOKE (1997), reportedly with the simple message “No cuts.”  Anime art styles range from wild, exaggerated stylization to subtle, more realistic approaches where the use of lines are prevalent, though more influenced by a brush than by a pen, where Miyazaki’s lush colorization filling every inch of the frame contrasts with Takahata’s more minimalist, pastel watercolor technique that leaves plenty of empty space unfilled, especially around the edges of the frame, creating more abstract imagery.  Miyazaki’s extraordinary musical composer, Joe Hisaishi, provides the gorgeous soundtrack for the film, which is based upon a 10th century Japanese folktale called The Tale of the Bamboo Cutter, which is Japan’s oldest recorded story, predating the world’s first novel, Lady Murasaki’s The Tale of Genji by at least a century.  At age 79, Takahata has been trying to make this film for more than 50 years, best known as the maker of GRAVE OF THE FIREFLIES (1988), where film critic Roger Ebert, Grave of the Fireflies Movie Review (1988) | Roger Ebert, claims it “belongs on any list of the greatest war films ever made,” but also his more subtly distinctive films, known for being quiet and humane, ONLY YESTERDAY (1991), POM POKO (1994), and MY NEIGHBORS THE YAMADAS (1999), where the director has returned from semi-retirement after a 14-year absence.


After the announced retirement of Hayao Miyazaki on September 6, 2013 after nearly three decades at the helm, his departure leaves the future of Studio Ghibli very much in doubt, as the secret to the studio’s popular longevity has been their insistence on producing hand-drawn animated films for decades, sticking to the painstakingly slow process of drawing images frame by frame long after other studios have embraced computer-aided animation and special CGI effects.  Every one of Studio Ghibli’s successes has adhered to the hand-drawn tradition, from MY NEIGHBOR TOTORO (1988) to Miyazaki’s final film The Wind Rises (Kaze Tachinu) (2014) released earlier this year, though POM POKO (1994) was the first to use computer graphics, while PRINCESS MONONOKE (1997) was Miyazaki’s first mix of digital drawing and coloring onto the 2D hand-drawn imagery, the latter being a more delicate artform that has been able to sustain itself because it has employed the same animators throughout their careers, as opposed to other studios that rely upon short-term piecework.  According to Tokyo-based Polygon Pictures president and CEO Shuzo John Shiota, the leaders of the hand-drawn style are becoming fewer, “In Japan not many young people are coming in (to the 2D animation scene) anymore.  The master animators are not easy to replace.”  Shiota concludes that today’s animators simply don’t have the patience and can’t draw as well as their predecessors did, where it’s inevitable that computer generated imagery is the wave of the future.  The Japanese market, however, loves their hand-drawn anime, where according to the top-earning domestic Japanese films in 2013, 2013 Japan Yearly Box Office Results - Box Office Mojo, six of the top ten are hand-drawn animation, despite a digital wave steadily encroaching on the industry.  If you watch a movie from Studio Ghibli, part of the brilliance is being able to see the spectacular, where it is not out of the ordinary to see a deer morph into a monstrous god in PRINCESS MONONOKE (1997), a boy turn into a flying dragon in SPIRITED AWAY (2001), or a fish transform into a young girl in PONYO (2008).


Like MY NEIGHBORS THE YAMADAS (1999), Takahata in this picture prefers to use the simplistic art style of watercolor pictures, creating a ravishingly beautiful opening in the middle of a bamboo forest where Okina (old man) is drawn to the light emanating from a particular stalk.  Investigating further, he is shocked to discover a palm-sized baby nestled inside, which he believes is a heavenly offering, bringing the baby home to his equally astounded wife Ouna (old woman), calling the child “Princess.”  While he hesitates to share his prize, believing it was his own destiny to discover this princess, they are both further amazed to discover their child grow, roll over, and walk in a matter of days, where they are both literally able to see growth spurts before their startled eyes, quickly realizing this was no ordinary baby.  As the child grows old enough to play with local kids in the fields, nicknamed “Little Bamboo,” which is an utter delight to watch as everything is discovered for the first time, the film interestingly takes on a dual perspective, one from the curiously developing point of view of the child, and another throughout from the more protective view of the adoptive parents.  This device allows the audience to comprehend the split personality that develops, as her unique childhood is expressed through joyous liberation and exploration with forest creatures and friends, while the responsibilities of parenthood is something else altogether.  Okina discovers more glowing bamboo stalks in the forest which are filled with gold, leading him to the conclusion that he was expected to provide an appropriate environment for a true princess, eventually moving from the edge of the forest into a palace in the city, along with many hired assistants to provide for her every need, including a teacher of etiquette named Lady Sagami that would transform her from a liberated young tomboy into an obedient princess whose beauty and reputation is worthy of her title, attracting the interest of rich suitors who would come from great distances to ask for her hand in marriage.  Anyone familiar with Homer’s Odysseus, Shakespeare’s The Merchant of Venice, or Puccini’s exotic final opera Turandot will recognize the line of suitors vying for the hand of a beautiful maiden, not to mention Siegfried having to overcome a curse of the gods and battle through a ring of fire to reach the imprisoned Brünnhilde in Wagner’s Der Ring des Nibelungen.


There’s even a naming ceremony where a venerated royal priest gives her the formal name of Princess Kaguya, for the scattering light that radiates from within her, where they hold a celebratory party that goes on for days but turns into a disaster, where she hears rumors that she’s not a real princess at all, that her family purchased her title.  In a fit of disgust, she bolts from the castle racing as fast as she can, where she’s seen as a blur in black and white charcoal drawings where her whizzing form is the only touch of color in an otherwise empty landscape.  The abstract spaciousness of the unfinished drawings project her restless state of mind as she anxiously returns to her former home in the forest, hoping to find the simpler and happier times of her childhood, but all her friends have moved away, leaving her stuck in a visually empty netherworld that resembles a desert of snow, only to awaken in her bed with the party still raging and no one has missed her at all.  Unfortunately the suitor story grows unnecessarily repetitive, as it duplicates itself, each initially given an impossible task, where the Princess believes she’s gotten rid of them all, but they eventually return years later reporting miraculous successes, which prove to be hoaxes.  Nonetheless, the attention even draws the interest of the Emperor, but when he attempts to possess her, she uncannily discovers the power to disappear.  While it all remains cloaked in beauty and innocence, nonetheless the parents controlling interests vie with her own unyielding spirit, which is essentially the centerpiece of the film, but then more mysteries unravel, where we discover she is a child of destiny, a daughter of the moon, and that it’s only a matter of time before she must return.  This narrative wrinkle thrown in at the end feels like it comes from another story, as it’s a supernatural element at odds with the discovery of her own innate humanness.  Takahata never finds a way to successfully blend this unfathomable revelation into the film without resorting to naked manipulation, where the extended tearful anguish from being ripped from her earthly family at the end feels forced and excessively traumatizing (one should question the tagline suitable for all ages).  Had the Princess liberated herself from what was expected of her by her parents (and society) as well as her ultimate fate, perhaps this would have been perceived as overly modern, where perhaps it might have lost some essential Japanese component, where it is her duty to follow her destiny.  After all, this was originally conceived in the 10th century, when women had no conceivable place in society except to follow behind and obey the dictates of men.  But seen today, there’s something cruelly uncomfortable about the magical celebratory nature of the finale, where the Princess is so close to achieving the unthinkable, imagining a different life for herself, but instead ends up doing what’s traditionally expected of her, seemingly with no free will whatsoever.  Despite the joyful feel of the transporting music, the horror is she is a fading light, a distant memory, a shell of the person she might have become.
Posted by Robert Kennedy at 12:00 AM