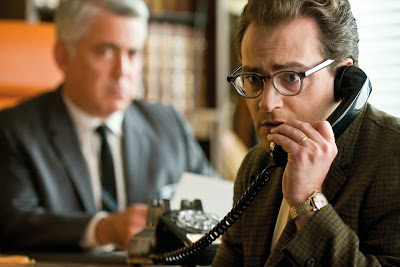 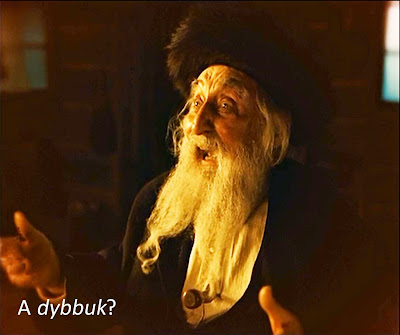 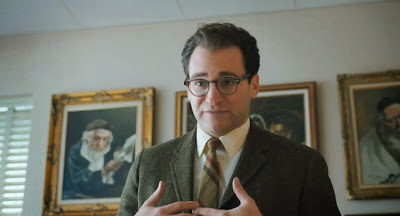 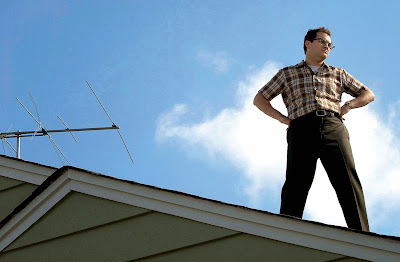 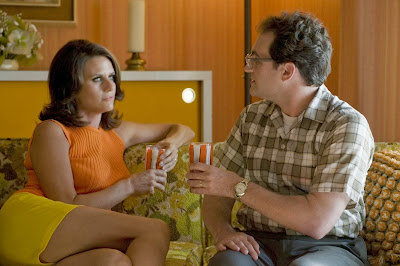 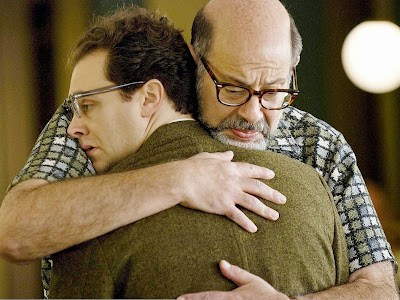 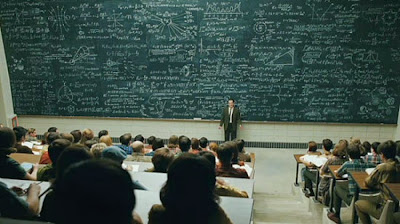 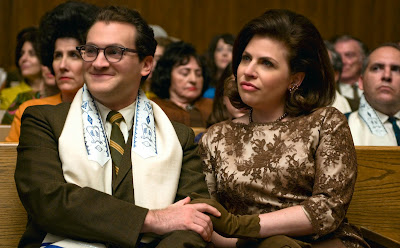 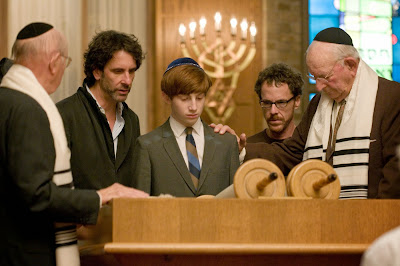 “No Jews were harmed in the making of this motion picture.”

A darkly comedic yet also miserablist parable of the modern world as seen through the eyes of an ordinary man, but in this case, it’s all wrapped up in Jewish traditions and lore, where like the Old Testament character of Job a man is challenged at every step along the way but still tries to find a meaningful significance to it all, to be a serious man, someone whose moral values remain intact and where God still has a place in his life.  The Coens seem to enjoy pestering this man along the way, but they seem intimately qualified to tell this story, filled with traditional Jewish signs and symbols, even an opening two hundred year old prelude sequence which is spoken only in Yiddish, all of which suggests man is cursed.  The absurdist image in this film that sticks in my mind is of the professor standing in front of a blackboard filled to every inch with immensely difficult and complex equations, all proving what?  That the one thing we’re sure of is that we can’t be sure of anything.  “Accept the mystery.”  For the most part, the movie is filled with an unfamiliar cast, as there are no stars, but Michael Stuhlbarg is Larry Gopnik, a Midwest university physics professor who has reached the decisive moment in his career where the school is determining whether they will grant tenure, but whose life falls apart and becomes embroiled in his own personal turmoil.  Set in the 60’s which was itself a turbulent time, there are only musical cues offered as evidence, as the Jefferson Airplane (“Somebody to Love” and “Today”) and Jimi Hendrix (“Machine Gun”) are featured prominently, also a boatload of pot to help develop a skewed religious irreverence.

This film is so jam packed with Jewish references that the viewing public will likely miss nearly all of them, but no matter, they’ll still see the big picture, the difficulties of maintaining traditional faith which provides few answers in an everchanging modern world.  While Gopnik is basically a decent guy who tries to be decent to others, traps are invariably set in his path, and just because the directors are having fun poking fun at their lead character, reliving their past by offering a series of insurpassable obstacles set in the bleakest most miserable of environments doesn’t necessarily translate to amusement onscreen, as much of this was just misery overkill.  Their kids are aloof and distant, as if living on other planets, where their son Danny (Aaron Wolff) continually has to outrun a local bully to keep from getting beat up every day, but no one asks any questions, while their daughter Sarah (Jessica McManus) steals money from her parents in order to save up for a nose job, not to mention the sibling warfare between the two.  The neighbors on one side of their spotless suburban subdivision home are hard core survivalists with a heavy trace of xenophobia, while on the other side is Amy Landecker smoking pot and discreetly sunbathing in the nude.  Meanwhile his wife (Sari Lennick) asks for a get (a what?), a Hebrew divorce and insists he move out of the house because she’s become smitten with another guy, Sy Ableman (Fred Malamed), a serious man who she feels is more esteemed and worthy, largely because he’s a pompous ass and that’s what he thinks about himself.  In other words, he’s forced to move to the unpretentious surroundings of the Jolly Rodger motel, along with his unemployable, borderline insane brother Arthur (Richard Kind), who appears to be trouble for everyone he meets, occasionally returned home after various encounters with the police.

Gopnik’s way of dealing with these problems, which are just beginning by the way, is to make a series of obligatory visits to three different Rabbi’s, each of which asks him to take a good look at himself and try to find his own answers from within, suggesting individual perspective is everything, basically shirking any responsibility.  As he works his way up the Rabbi seniority scale, one would think the wisdom imparted would become more sage, but that is hardly the case, perhaps the opposite, as the older the Rabbi’s become, the less accessible they become to society and the less they have in common with ordinary people.  Perhaps most stunning is the goy’s teeth story where a dentist finds strange Hebrew letters inside a patient’s mouth which has a surrealistic quality all of its own, set to the incendiary guitar riffs of Jimi Hendrix no less, all of which leads us to the brink of astonishment when we realize, like the equations on the chalkboard, that we don’t really know what’s going on, and that the point of it is we’ll never really know.  Strange mystical stuff, all shrouded in a little known uncertainty principle, which may as well be that curse referenced in the opening segment.  By the time Gopnik’s son finally meets the high Rabbi, who’s too busy lost in religious thought to meet with the father and has time to meet only with newly graduated bar mitzvah boys, through the haze of marijuana he offers the satirically sage advice that one might expect from a Mad magazine comic rendition of a Dalai Lama perched atop the highest peak in Shangri-La from THE LOST HORIZON (1937).  The Coens are skilled formalists who can squeeze a joke out of any dire situation, but here they seem to be having more fun than the audience by belittling the authority figures of their youth and finding life as demoralizing as The Divine Comedy entranceway to Dante’s Hell:  “Abandon hope all ye who enter here.”

Something about the theatrical screening, there was a bus from a Jewish senior center where about a dozen of these old Jewish ladies all carrying canes or walkers were talking loudly to one another throughout the entire picture, an annoyance that felt as if on cue, (by the way, which is worse, lit up cell phones or patrons loudly talking?).  Based on the drug use, nudity, and continual sarcasm, one might think they would find it irreverent to say the least, but they all loved it, offering nothing but high praise afterwards.  The Coen brothers would have loved their reaction.

Justice the founder of my fabric mov’d:
To rear me was the task of power divine,
Supremest wisdom, and primeval love.

Before me things create were none, save things
Eternal, and eternal I endure.
All hope abandon ye who enter here.

Such characters in colour dim I mark’d
Over a portal’s lofty arch inscrib’d:
Whereat I thus: Master, these words import.