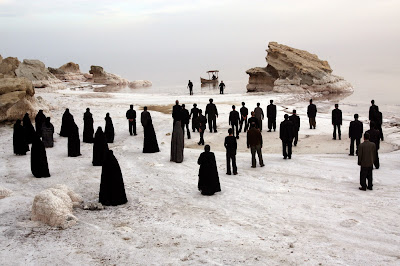 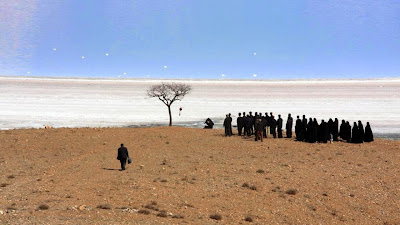 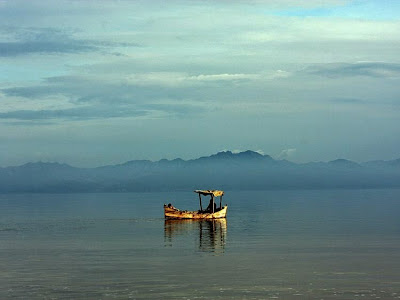 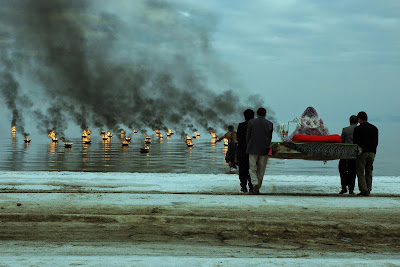 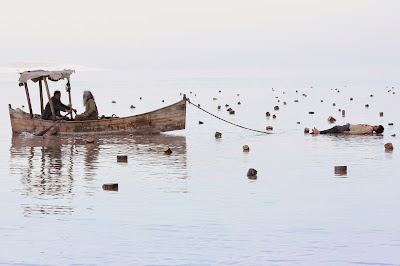 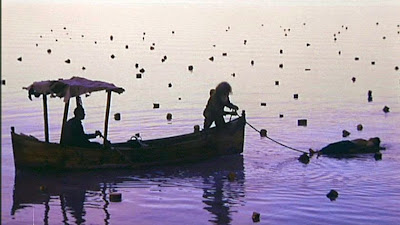 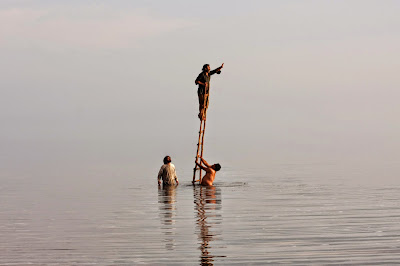 Mohammad Rasoulof was arrested in March 2010 along with fellow Iranian director Jafar Panahi, which was part of the government’s reaction to reports from inside Iran that called the June 2009 election of President Ahmadinejad a fraud, effectively calling it a dictatorship where artists in Iran may no longer speak freely.  Rasoulof was released shortly afterwards, but Janafi was held for nearly three months.  After seeing this film, playing as part of the Iranian Fest at the Film Center, a story largely told in code where the metaphoric imagery is designed to obscure its intent, one would think Iran has replaced Siberia as the cruelest place on earth.  The story unfolds through a mysterious series of events all taking place on the white islands of Lake Urmia in the northwestern part of Iran close to Azerbaijan, the largest lake in the Middle East and the third largest saltwater lake in the world.  Reminiscent of Korean filmmaker Kim Ki-duk’s THE ISLE (2000), which is easily one of the most gorgeously photographed films ever seen on the surface, but one of the cruelest and most extreme under the surface, this film similarly features one of the most hypnotic settings, where the ravishing beauty hides some of the most grotesque human behavior on the planet, an example of the kind of backwards thinking that still exists in remote areas in Iran that rely on an archaic, yet rigidly dogmatic rule of law.

Like a modern day Charon, a boatman who transports the dead across the River Styx, Rahmat (Hasan Pourshirazi) is an old man of the sea who rows his boat across the white saltwater seas of this desolate purgatory using a small glass vial to collect the tears from the small clusters of inhabitants who live on these white islands, where custom has it their tears will turn to pearls.  He gains the trust of the people by bearing witness to their heartbreaking stories, always as a silent observer, never intervening in their affairs.  When the villagers are unhappy with the gods who will not bring them rain, they sacrifice the most beautiful young maiden in a marriage to the sea, whose tears Rahmat collects before they carry her through a purifying ring of fire and set her adrift on a wooden raft to be carried out to sea.  When a young boy swims out to join her, the villagers collectively stone him, leaving his body brutally injured where Rahmat collects his tears as he progressively weakens.  Rahmat literally throws salt on his wounds, which only makes the pain worse.  On another island, the elders are unhappy with a painter who paints the sea red instead of blue, where they bury him up to his neck for Rahmat to collect his tears before bathing him in the saltwater, then instruct him to climb a ladder and keep staring at the sun, hoping this will cure the problem.  When it doesn’t they pour monkey urine in his eyes.  When that fails, they send the painter and the stoned victim to a desolate island to be prisoners of a deranged warden who otherwise lives there in utter solitude.  When the stoning victim eventually dies, he is sunk to the bottom of the sea with a floating device that serves as his headstone, where we see a graveyard of headstones of those buried at sea.

Ebrahim Ghafouri is the cinematographer capturing the breathtakingly poetic visual imagery, all forming a kind of backwards mythology of harsh cruelty.  Perhaps the cruelest irony is saved for the film’s editor, who happens to be Jafar Panahi, one of Iran’s leading directors who has made only a single feature film following his censure after the banning of CRIMSON GOLD (2003) in Iran, a film that upset the Iranian religious hierarchy because it featured a suicide, police routinely rounding up innocent civilians on the street, petty thievery, the drinking of alcohol, also prostitution and homelessness in Tehran.  There’s even slang, and the use of the word “dude” spoken by an Iranian in the script.  For this crime, he’s been unable to secure adequate funding to make more films, so in order to work he’s forced to take a secondary role as editor of this film.  Interesting that both filmmakers were subsequently arrested, where only the future will tell if either filmmaker will ever make another film in Iran.
Posted by Robert Kennedy at 12:01 AM