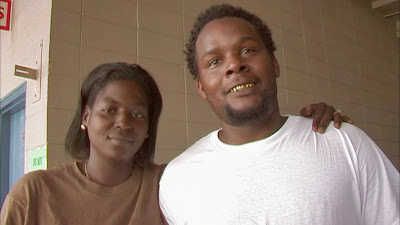 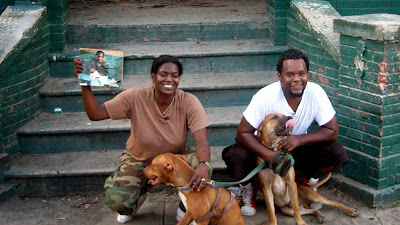 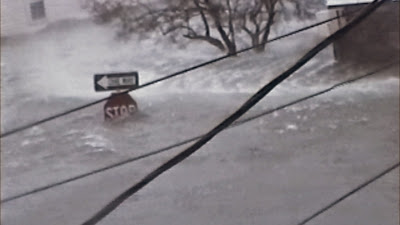 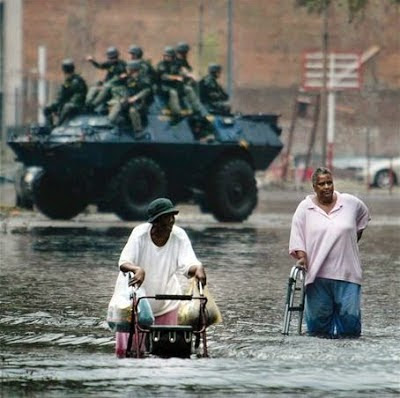 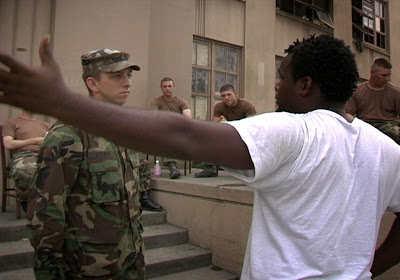 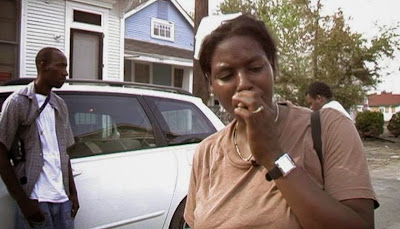 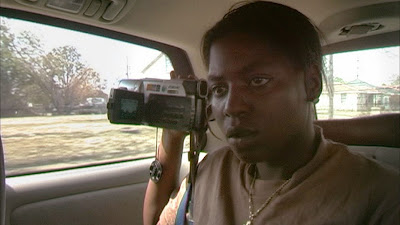 It felt like we lost our citizenship.  —Kimberly Roberts

A wonderfully unpretentious film that by tracing the path of one family gets to the heart of the matter of the government’s notorious absence in New Orleans after Katrina leaving residents, but mostly poor and black residents where the greatest damage occurred, to fend for themselves.  Without explaining how she happened upon a video camera, apparently a $20 camcorder that feels left over from the CLOVERFIELD (2008) movie set, Kimberly Roberts from her home on France Street in the Lower 9th Ward of New Orleans starts filming her house and everything around the neighborhood in anticipation of Hurricane Katrina, as she wanted a recording of what it looked like both before and after.  Greeting everyone she meets on the street, asking what their plans are, also filming while riding her bike, where you can hear the click click click as the pedal hits the kickstand, we get a good sense of how she sees her neighborhood and the people familiar to her living in it, some of whom, including several in her own family, will not survive the storm.  She has a natural ease with people and the good sense to narrate while the camera is running explaining what we are looking at as she stocks up on food, ice and emergency provisions.  Unable to afford “the luxury” to get safely out of town (apparently their car had recently been stolen), she and her husband Scott decide to ride out the storm from her home, producing about twenty minutes of some of the most intense footage of the storm in action, where after the levees break a mere three blocks away, she comments “It’s like an ocean out there” as the water rises and her street is flooded as high as a stop sign.  Her family is forced into the attic and eventually move to a house across the street that is one story higher, where she and about a dozen others including children, elderly and an infirmed have to be carried over a river chest high by her husband who uses a punching bag as a flotation device.  With no help in sight and a 911 operator that tells them the city is not prepared to offer them any rescue assistance at this time, they have to wander through this nightmarish deluge on their own.
As we piece together footage after her battery runs dead where the film is framed with time headings—Two days after the levees fail, or one week after the levees fail, we learn that despite an abandoned Navy barracks several blocks away that had already been closed due to cuts in federal funding, where only a skeleton crew remained protecting the base, this family was turned away from more than 200 empty beds at the point of M-16’s locked and loaded pointed directly at them, ordering them to disperse.  Instead they spent several nights in an abandoned school before they found a boat to take them to a Red Cross shelter, which is where they met the documentary filmmakers who were originally attempting to do a story on the travails of the National Guard, over-extended both in Iraq and now back here at home, but the Guard refused to cooperate.  Among the most devastating footage captured was the deadly aftermath where in a rented van filled to capacity with 25 of her neighbors they drive past the New Orleans Superdome, where a long tracking shot resembles the look of the Civil War wounded in GONE WITH THE WIND (1939), capturing defenseless, helpless people who have no way out, many lying on the ground sick or near death from lack of water while several buses remain idle parked right across the street.  While this entire catastrophe is amateurishly documented, Roberts has an amazing ability to offer her own soulful perspective whose raw insight and authenticity adds to the harrowing realism of the moment.

Actual news footage shown on TV is interspersed with what Roberts sees on the ground, oftentimes at complete odds with one another, especially when President Bush or FEMA director Mike Brown affirm their alleged successes, or when we get a good look at the tourist video that the city still proudly uses.  The Roberts family exits the city for their first time for a home 200 miles away owned by an uncle which has no running water, where in a typical day in the life scenario, the water department comes out to turn the water on at one point, only to return minutes later to turn it back off again.  That uncle lost his mother when she was abandoned in a hospital during Katrina, as the entire staff evacuated and left the patients behind to fend for themselves.  From this location they can visit FEMA centers where they line up next to “Gate B – Cattle entrance” and reapply for emergency funds that never came, after which they hope to move to a safer location, believing everything has been lost at home.  When they make a return visit several weeks later to obtain what they can, the streets are a sea of mud and obliteration patrolled by neglected, near starving stray dogs.  Kimberly feels blessed that a photo of her mother remains intact, explaining her mother died of AIDS when she was 13 and this is her only surviving keepsake.  Amazingly their two dogs left behind survived, though they have been living on highly contaminated water, while the corpse of one man seen in the before-Katrina footage still lays dead in his living room.  The National Guard is summoned to obtain the body.  Again a long tracking shot of several city blocks both a few weeks after the flood and shown again a year later shows one or two houses either rebuilt or still standing on her block while everything else remains a wasteland of utter demolition.  Nothing has changed as there is simply no sign of life left there at all.

Instead they set out for Memphis, Tennessee where another relative lives, bringing extended family and the dogs, where in a nice, clean neighborhood it’s clear the additional burden is asking a lot of anyone.  At first, the peace and quiet and relative safety is like an oasis after the storm, but after a period of time, having nowhere else to go, they eventually return to New Orleans where Scott gets a job working with a building contractor reconstructing houses.  Kimberly has a budding rap career under the name Black Kold Madina which is on full display after she discovers her own rap demo previously believed lost when she provides an audacious, foot stomping performance of her song (I Don't Need You To Tell Me That I'm) “ Amazing,” Black Kold Madina - "Amazing" YouTube (3:54), while standing outside an overstuffed closet in a crowded bedroom with her husband proudly watching which is in perfect synch, a song that offers plenty of insight into her personal history, including that knife scar across her husband’s jaw, their life before Katrina as drug hustlers, and her literal resurrection into a woman with a clean slate and a new attitude about her future.  It’s not so much a song as an anthem of joy and triumph in the face of diversity.  There’s a defiant “Won’t Get Fooled Again” mentality that Kimberly develops after she’s had a chance to see schools outside New Orleans actually prepare kids for college and the future, while with the highest incarceration rate in the nation New Orleans is instead “preparing us for prison."  Kimberly Roberts has come full circle with her before and after footage.  Little did she know that what she couldn’t film, the growing maturity inside of herself, is what ended up changing the most.  This disaster movie which is filled with first hand observations from an every day black perspective turns into a film of personal triumph, and in a moment of rare humility, Kimberly is brought to tears when one neighbor actually thanks her for the efforts she made on behalf of all her neighbors.
Posted by Robert Kennedy at 12:12 AM