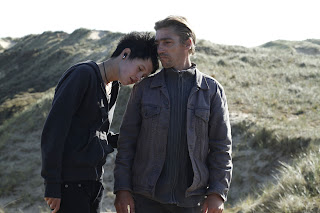 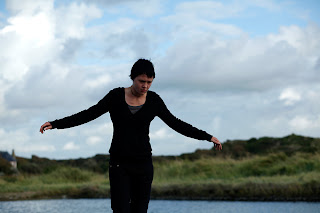 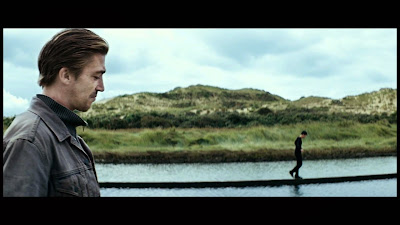 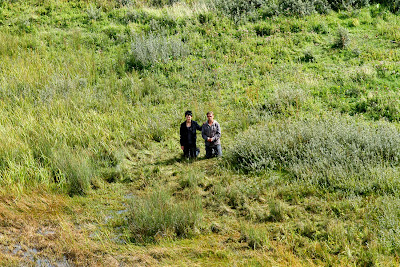 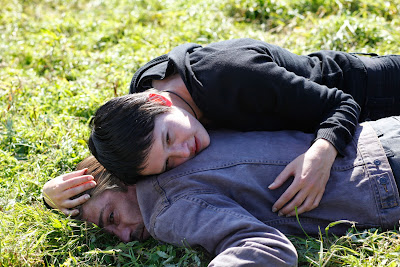 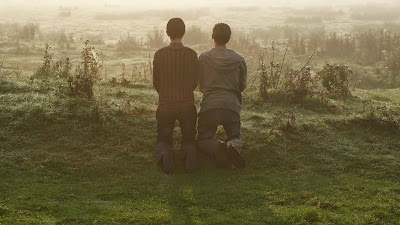 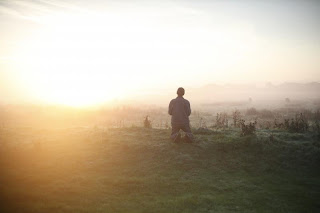 In keeping with a current trend of high profile filmmakers that fail to invent new ideas and instead intentionally revisit their own works, such as Béla Tarr in The Turin Horse (2011) or Aki Kaurismäki in Le Havre (2011), where one could also include David Fincher in The Girl With the Dragon Tattoo (2011), Dumont has returned to familiar themes from L'HUMANITÉ (1999) mixed with a heavy dose of Dreyer’s ORDET (1955).  While something of an experimental and mostly wordless film exploring the mystical ramifications of good and evil, blending them together so that one can look very much like the other, the film is set in the lush greenery of Northern France not far from the coast (seen here:  Images for Parc Naturel régional des Caps et Marais d ...) where most of the film feels like a road movie.  Beautifully shot in ‘Scope by Yves Cape, the film is immersed in the natural world, where humans are seen as tiny creatures that occasionally dot the landscape, but otherwise barely alter the worldly design.  The featured character is Guy (David Dewaele), who spends most of the film slowly walking through the fields and hillsides, where he can also be seen camping outdoors.  He is joined by Elle (Alexandra Lemâtre), a young girl that follows him on long walks through a good part of the film, where they are friends, but remain distant, showing no intimacy of any kind.  Early on, Guy offers a strange and bizarre form of help, the kind that will send a jolt through the audience, as it seems boldly disturbing, yet she is obviously appreciative.  Nearby, there is a young girl that seems caught in a psychological paralysis, as if her brain is nearly dead, where Guy offers a kind of hands on assistance to heal her, behavior right out of L'HUMANITÉ.

Something of a drifter along the lines of Kwai Chang Caine (David Carradine as “Grasshopper”), the Shaolin monk from the Kung Fu TV series (1972 – 75), the audience senses an otherworldly dimension to Guy, who never expresses his thoughts and seems to perform both good and bad deeds, never changing his facial expression, never eating much, and spending nearly all of his time outdoors, as if gaining strength by the sun’s rays.  Much of this resembles the character of Johannes in ORDET, a slightly disturbed character that is mentally touched in the head but believes he is a living Christ, spending much of the film roaming the countryside reciting scripture to the winds, afraid people believe in the dead Christ, but not in the living one, a fragile creature mysteriously attuned with divine insight.  Here, in contrast, villagers believe Guy holds divine powers, where it’s the audience that may remain suspicious, especially witnessing his willingness to perform brutally violent acts, very un-Jesus like, where it's hard to apply rational laws to an irrational situation, where he does not fit the church’s assessment of a saintly creature.  Instead, like Pharaon in L'HUMANITÉ, it feels like he comes from beyond or outside human comprehension.  This alters the landscape of the film, suggesting nothing is as it seems.  The natural splendor of the world outside, however, remains constant and unchanged, where characters continually walk through verdant grasslands that remain untouched by human development, suggesting there is an Edenlike perfection, but humans, along with the other animals, are not part of it, as they are the beasts that inhabit the earth.  In perhaps the strangest scene of the film, Guy is joined by a female traveler (Aurore Broutin) on the Boulogne Road, a girl looking to camp nearby, where their behavior together borders on beastly, offering a strangeness and peculiarity simply unseen in other films.

Dumont allows the audience to dwell upon Guy’s (and God’s) impact on the landscape, where one wonders what motivates either one of them into action, as mostly both remain a passive, inert force with an unseen darker side that may attempt to help in mysterious ways, where mostly Guy (seen) and God (unseen) simply share time on earth with humans in need, as they’re the ones likely to call upon them.  While we’re clued into the fact both possess unworldly powers, we’re not sure why or under what circumstances either one is prepared to use them.  Mostly nothing happens in this oddly familiar world, set in the isolation of a remote rural landscape where anyone familiar with L'HUMANITÉ, ORDET, or even the most recent Carlos Reygadas film SILENT LIGHT (2007) will have an acute recognition, a déjà vu moment, where Dumont and others have already taken us down this road, where it’s hard to find anything new in this version.  Unlike the other films, which offer an open-ended sense of transcendence, Dumont’s apocalyptic universe is stiflingly predetermined, where humans are no more than specks on the landscape in a cold and indifferent environment, seemingly abandoned by God, having lost their way long ago, where they are seen continually pecking at one another’s open wounds, becoming grotesque, nihilistic irritants in an otherwise Edenesque world.  Like Béla Tarr, it’s this sense of nagging fatalism, that humans are bound to destroy and fail miserably, that one finds continually disturbing in a Dumont film, where despite all mystic and Godlike possibilities, optimism is quickly negated by the darker impulses of the human condition.
Posted by Robert Kennedy at 12:00 AM