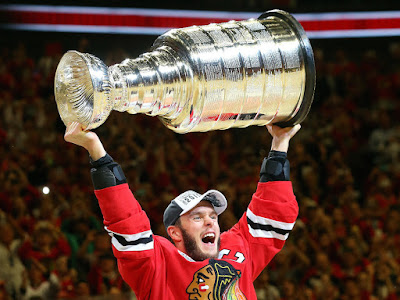 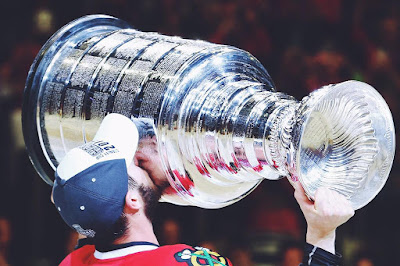 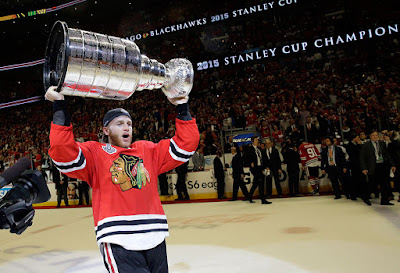 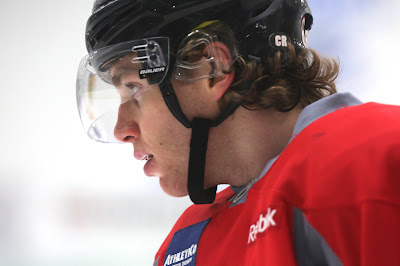 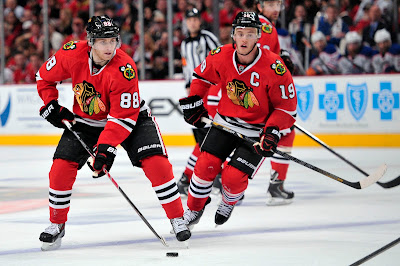 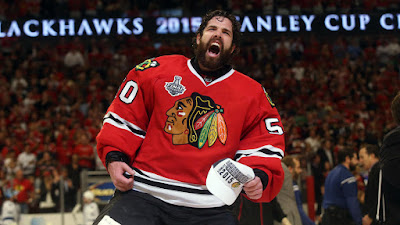 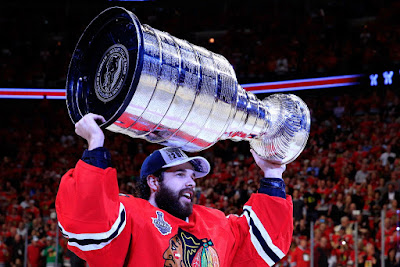 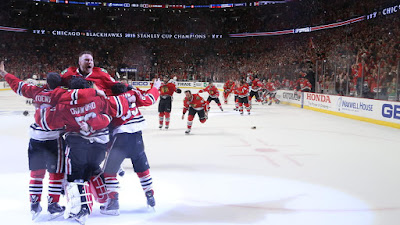 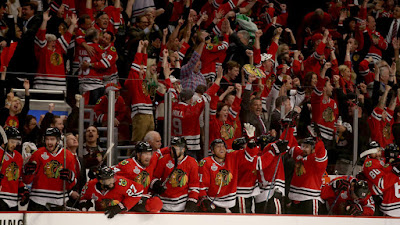 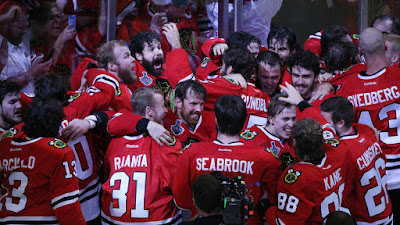 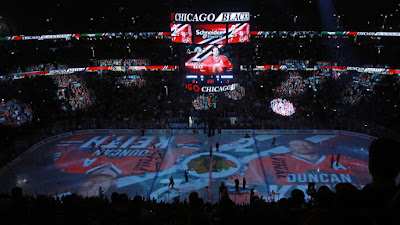 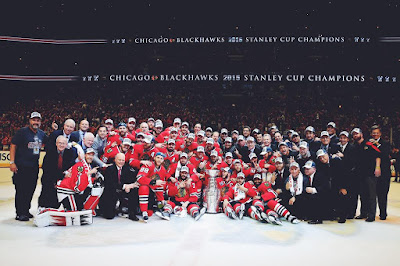 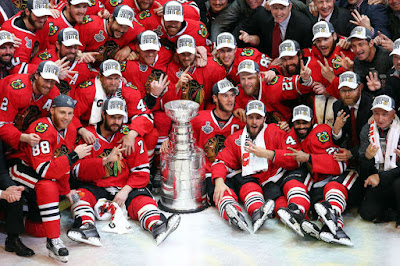 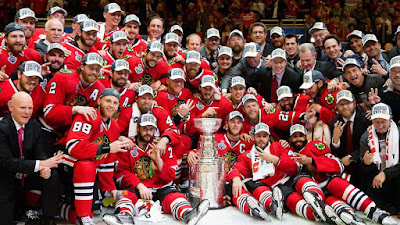 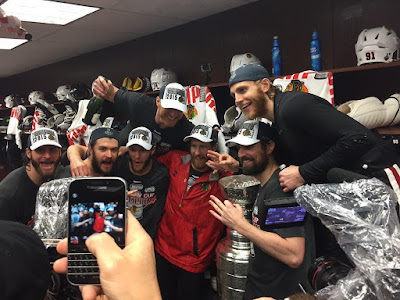 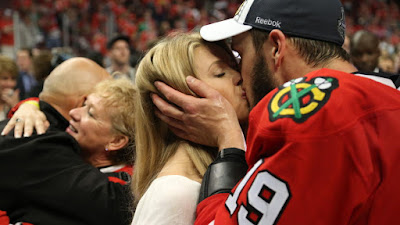 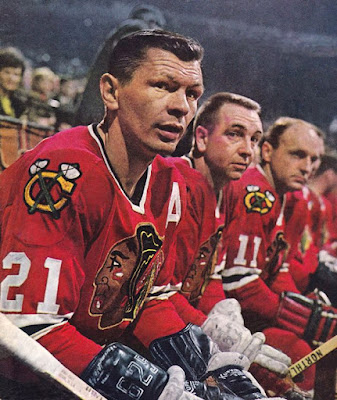 CHICAGO -- There was a moment in the pause before the Stanley Cup arrived on the ice when Chicago Blackhawks captain Jonathan Toews skated away from his teammates, looked up to the roaring, raucous crowd, and started applauding.

Cameras followed him, showing him on the scoreboard.

The 22,424 standing, hugging, cheering, selfie-taking, red-clad and relieved fans applauded back at their captain, loudly. Toews smiled and pumped his fists.

"I was just trying to absorb every moment, and I'm still trying to do it," Toews said on the ice, long after NHL Commissioner Gary Bettman handed him the Stanley Cup for the third time in six seasons. "It doesn't feel real. Even in the dying minutes, I can't really remember anything that happened to be honest with you. It was a dream, start to finish.

"This is pretty awesome."

There is no better way to describe the scene that unfolded inside United Center on Monday. Chicago's 2-0 win against the Tampa Bay Lightning in Game 6 gave way to the first on-ice Stanley Cup celebration in Chicago since 1938.

The Blackhawks won the Cup in Philadelphia in 2010, and in Boston in 2013. Those were great, special, and meant everything to this team and its players. They were topped by the memories created inside the building appropriately called the Madhouse on Madison.

"There's nothing like it," Blackhawks president and Chicago native John McDonough said. "Being from here, hailing from the city of Chicago, not the suburbs, and going with the ebb and flow of sports teams my entire life; I was around for the Bulls run and I never thought I'd see anything like that ever again. Maybe you never will. I mean, six championships in eight years, that's amazing. But we're really fortunate. This fan base gave us a chance. They came back and we're thrilled that we're able to reward them."

They were 25-0 in those situations during the regular season. They were 8-0 in the Stanley Cup Playoffs.

It was obvious in the first few minutes that they weren't going to lose this one.

Chicago started to execute what essentially was a perfect game plan. Every time the Lightning got the puck into the offensive zone, the Blackhawks knocked it right back out. The tension in the building slowly began to fade.

With 9:34 remaining and a whistle for a hand pass that led to a television timeout, it finally cracked. The fans stood, just about every single one of them, and started cheering during the timeout.

Play resumed, and less than a minute passed before the "Let's go Hawks" chant started to reverberate through the arena with 8:47 remaining. They were excited, eager, but patient. Remember, it was still just a one-goal lead.

Brandon Saad broke out of the defensive zone and down the left wing. The crowd surged. Saad put a drop pass onto Brad Richards' stick. The crowd sensed what was coming.

Richards froze goalie Ben Bishop with a shot-fake that led to a perfect pass to Patrick Kane. The crowd rose.

Kane slammed home a one-timer, the D.J. cued up "Chelsea Dagger," and at 14:46 of the third period there was bedlam in the building and presumably around all the bars and restaurants and homes and office buildings in the city of Chicago.

It appeared that nobody who entered the building with a coveted and expensive ticket Monday night sat down for the final 5:14.

There was no more tension, not with a two-goal lead. There was only a celebration with chants of "We want the Cup," and "Corey, Corey, Corey" after goalie Corey Crawford made back-to-back saves on Ondrej Palat's two chances in the slot at 16:37.

They sang along, "You gotta fight, for your right, to party" as the D.J. played the Beastie Boys' classic. The shots were 32-19 in favor of the Blackhawks at this time. The score was 2-0. Masterful.

"Everybody was standing up," forward Marian Hossa said. "What a moment."

Finally, once the clock bled down to 10 seconds, the countdown was on. Nine, eight, seven, six, five, four, three, two, one …"Chelsea Dagger" again. Bedlam. Insanity.

Fans sitting in the last row below the press box were high-fiving former Blackhawks forward and current radio color commentator Troy Murray. They were standing on seats. They were taking pictures of the ice, of themselves, of the crowd, the scoreboard, of anything.

They went bonkers when Keith was awarded the Conn Smythe Trophy. They sang along to "Sweet Home Chicago" as they watched the Blackhawks and Lightning go through the traditional handshake line.

That the Stanley Cup's arrival was delayed by the flooded streets of Chicago, a result of a massive storm that blew through the city prior to the game, mattered very little.

The party was on.

"I don't think there's going to be much sleeping tonight," Kane said.

In the middle of the sea of people on the ice, players with family members, credentialed media with cameras and microphones and recorders and notebooks, Blackhawks general manager Stan Bowman found Saad, the best of Chicago's second-generation core, and embraced him.

Saad, remember, can become a restricted free agent on July 1. He could well be targeted with an offer sheet by one of 29 other teams.

"I don't think he would want to leave after this scene here."

Nobody did. Nobody wanted to miss a moment.

"Incredible," Toews said. "Incredible."
Posted by Robert Kennedy at 1:48 AM