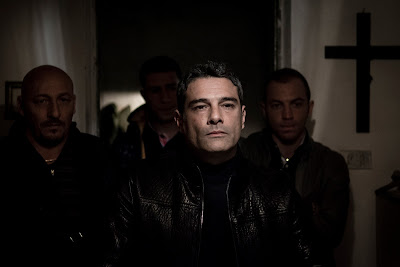 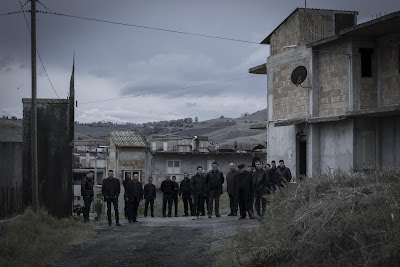 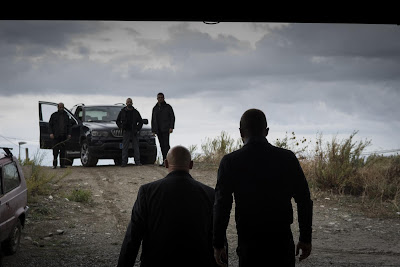 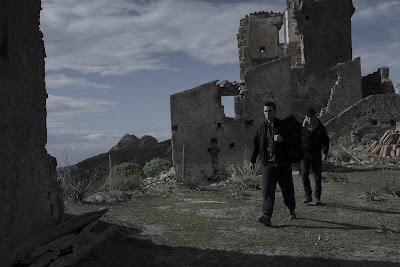 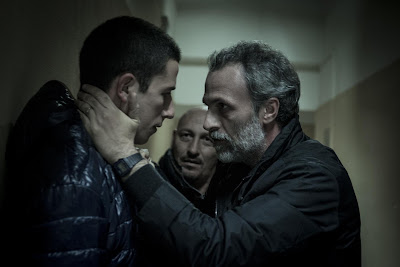 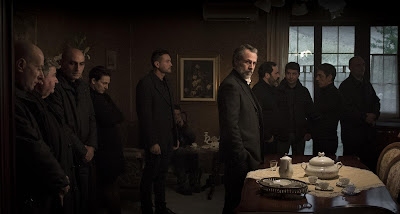 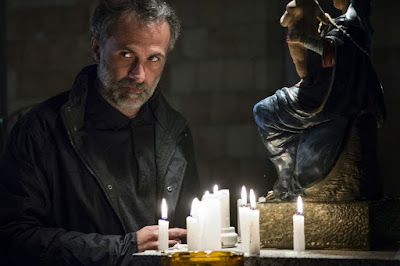 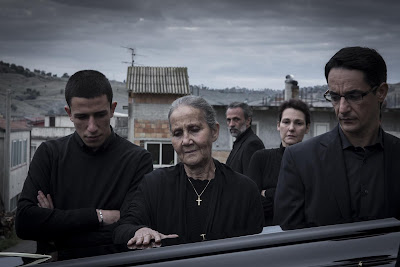 I made this film in a town that legal professionals and journalists stigmatize as one of the most mafia-ridden places in Italy, one of the nerve centres of the Calabrian ‘ndrangheta: Africo.  Africo, in the province of Reggio Calabria, on the Ionic coast has a beautiful coastline and is unknown to tourists.  When I said I wanted to make the film there, everyone tried to discourage me: it’s too difficult, it’s inaccessible, it’s too dangerous.  I arrived in Calabria full of prejudice and fear.  I discovered a very complex and diverse reality.  I saw mistrust turn into curiosity, and people opened their doors to us.  I mixed my actors with the residents of Africo, who acted and worked with the cast.  Africo has a very tough history of criminality, but it can help us understand many things about our country.  From Africo, we have a better view of Italy.
─Director’s Statement, Francesco Munzi

Reminiscent of the raw, graphic reality of the Taviani brothers, where Tuscany has been replaced by the rustic interior regions of southwest Calabria, the toe of the country’s boot-shaped peninsula, a sunbaked region of rugged mountains on the Mediterranean coast where the harshness of the barren lands mirrors the starkly deprived economic conditions of the residents living there.  Much of the film was shot in the ancestral town of Africo in the Aspromonte mountains, a region filled with stone churches, age-old traditions and ancient settlements, but also an area rife with criminal activity, as it’s the heart of the Calabrian mafia, known as the ‘Ndrangheta, a word that translates to “courageous men.”  In the 1970’s they gained notoriety by kidnapping wealthy people, including the grandson of oil tycoon John Paul Getty, considered the richest man in the world at the time, held captive for five months, whose severed ear led to a $2.7 million dollar ransom payout for his release, which they quickly invested into the international cocaine market, a strategy that has resulted in a $60 billion dollar criminal empire as of 2013, where they currently control more than 80% of Europe’s cocaine traffic.  The ‘Ndrangheta were also secretly involved in the Red Brigade kidnapping and subsequent murder of former Italian prime minister Aldo Moro in 1978, where due to the effects of the subsequent 1980’s government crackdown on the Sicilian mafia, the lesser known Calabrian ‘Ndrangheta has become the most powerful criminal enterprise in the world. Without delving into regional history or providing any narrative backdrop, the film paints a searing portrait of one particular family, providing a generational exposé of tragic proportions, allowing the viewer an insider’s view of the family business as it happens, becoming a meticulously detailed character study, highlighting the sharply contrasting personalities of those involved.  In much the same way that Matteo Garrone’s GOMORRAH (2008) reveals how the local community was drawn into nefarious activities of the Naples mafia, based upon the journalistic revelations of author Robert Saviano (who received death threats afterwards), this film is also adapted from a 2008 novel by Gioacchino Criaco, who was born in Africo, revealing the intricacies of blood feuds and old-world customs that have been handed down through generations of interconnected family groups tenuously held together by marriage and blood lines.   While Garrone’s film is a long, sprawling narrative filled with dozens of characters that is often confusing, this is a much simpler depiction, a story told without a hint of embellishment, held together by an enveloping mood of impending disaster, where much of it is expressed through long takes and extended wordless scenes.

The story concerns three brothers, the Carbones of Calabria, each introduced separately, where the youngest, Luigi (Marco Leonardi), is something of an ethically challenged hothead with a hair-trigger temper, seen thoroughly entrenched in the drug-smuggling business right from the start, a brilliantly choreographed business meeting held in Amsterdam that unfolds in multiple languages with international implications, where merchandise from Amsterdam headed for South America makes a stop in Milan for money laundering, as the money is recycled into legitimate stocks and real estate deals managed by middle brother Rocco (Peppino Mazzotta), a seemingly respectable businessman who prefers the more upscale, culturally diverse, well-to-do life in Milan, the financial center of Italy.  All but ignoring these two and everything that they stand for is their elder brother Luciano (Fabrizio Ferracane), a gruff and stoic man of few words who would rather spend his days tending to his herd of goats in the mountainous hills of Aspromonte.  Luciano’s son Leo (Giuseppe Fumo), however, hates his father for turning his back on the family operations and wants nothing to do with the farming business while idolizing his uncles, where he’s eager to fulfill his dream of becoming a man of action, and with it power and respect, where he wants in on his family’s activities, seen impatiently practicing shooting at the firing range.  Luciano, just as steadfastly, tries to prevent his son from being dragged into the blood feuds by refusing to do business with Don Peppe, a local drug lord who killed Luciano’s father.  But that doesn’t stop Leo, a trigger-happy teen, who in a moment of anger shoots up a rival bar in the middle of the night, running off to the protection of his uncle in the city where he’s just itching to be somebody, setting off a precipitous chain of events.  With often minimal dialogue, what particularly impresses with this film is the carefully calculated pace, beautifully edited by Cristiano Travaglioli, who also edited Sorrentino’s 2014 Top Ten List #5 The Great Beauty (La Grande Bellezza), a slow burn with an emphasis on the rustic and still primitive nature of the Calabrian region, where the rolling hills couldn’t be further away from the speed and vulgar action of most gangster films.  While there are few women present except widows and wives, their presence, especially the pained expression of the elderly matriarch, played with authority by Sicilian actress Aurora Quattrocchi, speaks volumes.  People have been playing their same respective roles in this highly patriarchal society since Biblical times, where the region is filled with crumbling ruins and seemingly ancient stone houses.  The land is the same over a passage of time, while the people inhabiting it come and go.  It’s not as if there are other options available.

And therein lies a sad truth about the story, as the same could be said not just for those in organized crime, but for any number of impoverished people around the world whose future has been stolen from them even before they were born.  Unfortunately desperate people are drawn into desperate situations.  While the uncles are the focal point of the film in name only, viewed more as symbols of a disintegrating moral authority, ultimately the most featured character is Leo, the blindly impatient son whose youth represents all hopes for the future, yet who so unglamorously wants to throw it all away.  We cringe watching his every move, as he couldn’t be more wrongfully misguided, literally fighting against improbable odds to be something more than a small fish in a much larger pond.  Plucked from hundreds of local kids, Fumo provides much needed authenticity, along with many others that were cast in smaller roles in order to speak the local dialects, but he also carries on his back an inevitable sense of doom, as early on the audience can sense his life, as well as all the other lives, have lost all meaning, but have been damned by longstanding blood feuds that existed prior to the film’s opening.  The audience doesn’t need to know the details of any backstory, or know what petty squabble provoked such a violent reaction, as it’s clear the neighborhood is populated by families who have all endured similar circumstances, where they’ve uniformly been forced to adapt to their cruel and inhospitable environment.  Understated and low key throughout, Leo simply doesn’t understand what he’s getting himself into, as instead he remains headstrong and naive, enamored by dreams of power, yet he’s surrounded by a world of shifting alliances, self-interest, and betrayal, where the ultimate family tragedy is watching their children die so young and so needlessly.  It’s an unvarnished horror that haunts the entire picture.  Strip away the artifice and it becomes the only story that really matters, where the sins of the fathers are passed on to the sons, given a sense of timelessness in this particular setting.  Beautifully photographed by cinematographer Vladan Radovic, it feels like we have stepped back in time, similar to the age-old Balkan conflicts of Joshua Marston’s The Forgiveness of Blood (2011), becoming a land that time forgot, carrying an underlying sense of dread throughout, like the looming presence of a still active volcano, where it’s only a matter of time before the inexplicable violence erupts and explodes, sending fear and chaos in every direction.  Intelligent and always compelling, mood is paramount in a film that continually plumbs the depths of revenge and moral outrage, where a common outcome leads only to death and despair, becoming a modern day comment on an old-world tragedy that never stops devouring more victims.
Posted by Robert Kennedy at 10:27 AM