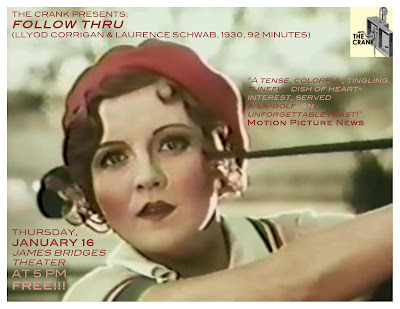 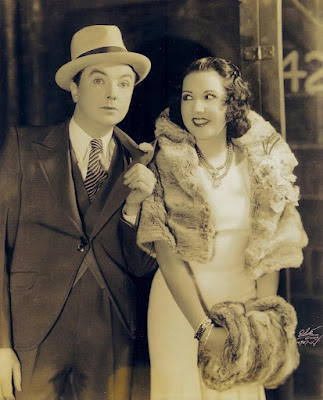 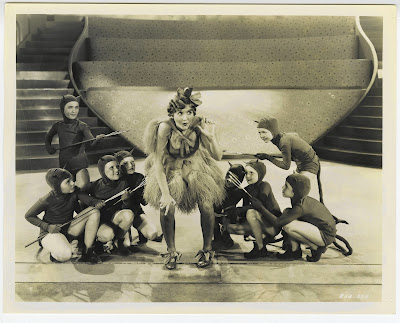 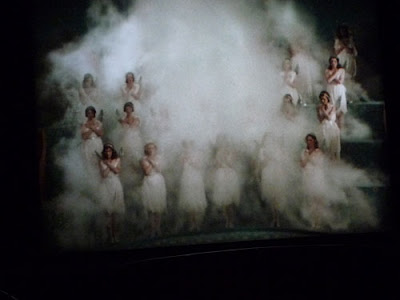 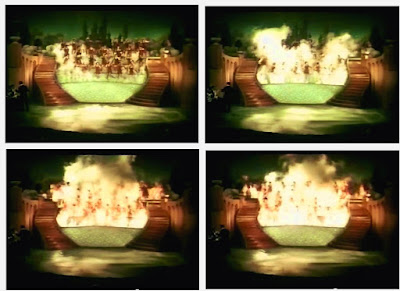 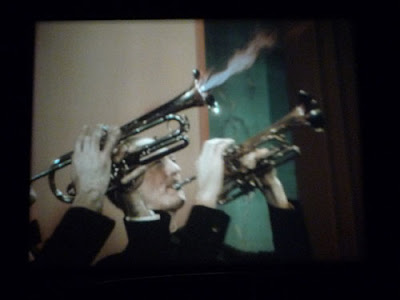 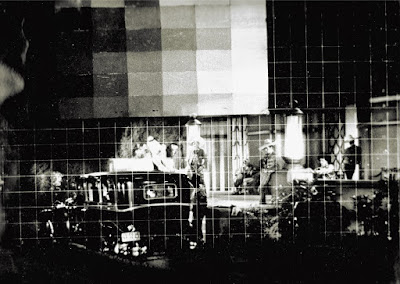 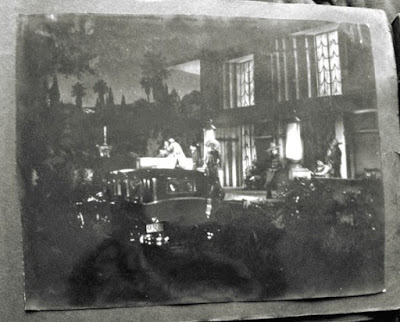 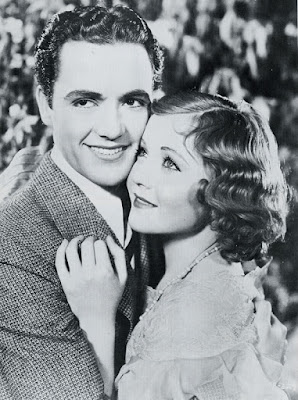 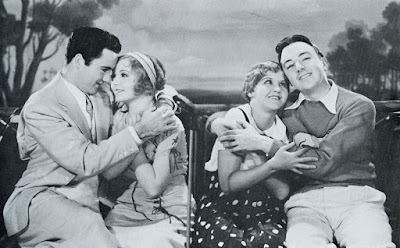 Only the second all-talking, all-color feature produced by Paramount Studios, the first being the Jeanette MacDonald operetta THE VAGABOND KING (1930), a film that uses the early two-color Technicolor process, one of over 700 Paramount productions filmed between 1929 and 1949 that were sold to MCA/Universal in 1958 for television distribution, and have been owned and controlled by Universal ever since.  However, because of legal complications, apparently with rights issues associated with Laurence Schwab, this particular title was not included in the original television package and has never been televised.  In fact, most have only seen it on poor quality VHS copies.  It was a contractual stipulation that all Technicolor negatives would be housed on the company’s premises.  In the mid 1950’s, with the two-color process completely obsolete, the company began systematically to destroy its negatives from the twenties and early thirties, yet for some reason this film was spared and eventually preserved in 1989 by the UCLA Film & Television Archive, where it can be seen exclusively in rare theater screenings, like the recent resurrection of the Northwest Chicago Film Society after nearly a year-long absence, finding a new home in the newly upgraded auditorium of Northeastern University, bringing in a new screen, sound system, and lugging their old projection equipment to this new venue that seats 400 people with stadium seating. Specializing in presenting rare and classic films in their original format, 16 mm or 35 mm prints, always opening with a comic short, the screenings spotlight the restoration efforts of archives, studios, and private collectors.  By the mid 1920’s, thousands of musical shorts hit the screens, but sound was only available for the musical numbers, while the actors portrayed their characters just as they did in silent films, with no audible dialogue.  While several earlier sound films did have dialogue, they all were all short films until Warner Brothers released the first feature-length part-talkie starring Al Jolson in The Jazz Singer (1927), with the star performing six songs.  The high production cost was a major gamble, as Harry Warner stopped taking a salary, pawned jewelry belonging to his wife, and moved his family into a smaller apartment.  But the gamble paid off, developing into a major hit, demonstrating the profit potential for talking pictures.  But immediately afterwards, only isolated sequences featured sound, usually the musical production numbers.  It wasn’t until the second Jolson hit was released, The Singing Fool (1928), that theater owners scrambled to install sound equipment into their theaters, hiring Broadway composers to write musicals for the screen.  The first all-talking feature, Lights of New York (1928), included a musical sequence in a night club, where the enthusiasm of audiences was so great that in less than a year all the major studios were making sound pictures exclusively.  One of them was the most popular film in 1929, Gold Diggers of Broadway (1929), which broke all box office records and remained the highest grossing film ever produced until 1939 when GONE WITH THE WIND broke attendance records everywhere.  Suddenly the market became flooded with musicals, revues and operettas, where Hollywood released more than 100 musical films in 1930, but only 14 in 1931, as audiences had been oversaturated with musicals and studios were forced to cut the music from films that were then being released.  It wasn’t until 1933 that Busby Berkeley revived an interest in musicals with his ingeniously choreographed routines, involving human bodies forming patterns like a kaleidoscope, literally transcending the reach of the actual stage in 42nd Street (1933) and Gold Diggers of 1933 (1933), radically transforming the look of musical films forever.

So when was the last time you saw a golf musical?  When this movie was released in September, 1930, music was commonly being stripped out of films, as audiences were staying away, so Paramount released the film with little fanfare, where it received so-so reviews and was quickly forgotten, surviving in a somewhat battered print and negative  retained in the storage facilities of the Technicolor Corporation, only to emerge sixty years later in a restored and pristine condition, serving as an example of one of Hollywood’s earliest color films (List of early color feature films), and one of the breeziest and most lighthearted of the early musicals.  Following the standard procedures of the times, Paramount bought the rights of a successful Broadway musical, using the same cast, but replacing the leads with their own studio stars, in this case matinee idol Charles “Buddy” Rogers, who starred opposite Clara Bow in the first Academy Award winning picture WINGS in 1927, and the beautiful and talented Nancy Carroll, almost forgotten today, a redhead who received the most fan mail of any star in the early 30’s, but was eventually released from the studio after earning a Diva reputation for recalcitrance and being uncooperative.  You’d never know it here, playing one of America’s sweethearts, with that rosy-cheeked, bright-eyed smile conveniently shot in close up that’s liable to generate oohs and aahs for just how sweet she looks.  Lacking the pace of the Broadway success, much of the uneven tempo can be attributed to an inexperienced first-time director, Lloyd Corrigan, who began his Hollywood career as a writer, including the first talking Fu Manchu movies starring Warner Oland as Charlie Chan.  FOLLOW THRU was his first directing assignment, where Paramount added Laurence Schwab, the original writer of the Broadway show, as a co-director.  Opening with an odd and rather dated sequence where Mac Moore (Claude King), a Scottish golf pro at a swank Southern California country club grows excited at the idea of teaching the game of golf to his newborn, but he’s disappointed to learn it’s a girl.  Nonetheless, groomed to be a champion golfer from birth, with a golf ball dangled above her eyes in a baby carriage to teach her to keep her eyes on the ball, Lora Moore (Nancy Carroll) grows up to be an adorable and charming young golf protégée, seen early on in a tournament with Mrs. Van Horn (Thelma Todd), a snooty and domineering, wealthy widow from a rival country club who’s used to things going her way, heard coughing throughout the match just as Lora was about to putt, an underhanded tactic that irks Lora’s caddie, Angie Howard (Zelma O’Neal), more than it seems to bother Lora, whose eyes meet across the green with Jerry (Buddy Rogers), a former golf instructor of Mrs. Van Horn, who reminds him throughout the picture of how “closely” they worked together, always inviting him back to her private residence on Pebble Beach, where the golfing vernacular is put through the ringer in sexual innuendos.  In no time, Lora, Angie, and Mrs. Van Horn are all vying for the young man’s attention, but Lora hires him on the spot for a few special putting tips that lead to several songs and early signs of romance.

In what is easily the strangest twist, and one of the weirdest things you’ll ever see, the film also introduces newcomer Jack Haley, the iconic Tin Man in THE WIZARD OF OZ (1939), as Jack Martin, the million dollar heir to his father’s department store chain, whose pathological shyness in front of women is revealed in a nervous eye and face twitch that shows him “getting excited.”  While he’s embarrassed whenever this happens in public, always trying to hide it from girls, his stunning naiveté and portrayal of a millionaire weakling is equally bizarre, making him one of the more singularly peculiar characters in the history of cinema.  However, his openness in talking about his “condition” is what you might call locker room conversation, as he speaks freely about it with Jerry, who he’s hired as his personal golfing instructor.  Added to the mix is Eugene Pallette as J.C. Effingham, another wealthy country club member who made his millions selling women’s girdles, immediately recognizable with his broad humor and girth, as he has a Jackie Gleason quality about him.  In one of the racier scenes of the film, Martin and Effingham disguise themselves (with gigantic moustaches) as plumbers in order to sneak into the women’s locker room where black hostesses in nurse attire walk around with trays serving cocktails, their purpose presumably to retrieve a family heirloom Jack gave away (to Angie) during one drunken outing, where the couple is seen together singing Button Up Your Overcoat.  All the songs are staged as they were in the Broadway show, except one, sung by Angie as evening entertainment at a masquerade ball somewhere “out of the country,” turning into the wildest scene in the film, I WANT TO BE BAD (from FOLLOW THRU - 1930) - YouTube (5:46).  After a devilish opening song and dance, complete with little child devils dressed in red, the film features dazzling visual effects where a group of winged chorus girls dressed in white arrive superimposed at the top of the screen, as if descending through the clouds from heaven, creating a Busby Berkeley choreographed style that turns into a hallucination, as after a thunder bolt, the costumes all turn red, with the wings replaced by little devil horns, where they work themselves into such a frenzied state, with the trumpets “breathing fire,” that they literally burst into flames, which doesn’t stop the dancers, who keep performing even while engulfed in a blazing inferno.  Not to be deterred, heaven presses a fire alarm, sending down an angelic fire truck to extinguish the flames, restoring order in the universe once again.  It’s easily the wackiest moment of a film that features fairly mediocre singing and plenty of hammed overacting.  Nonetheless, it’s all in good fun, where in the innocence of the Hollywood universe, romantic attractions happen instantly, where everyone falls head over heels in love just at the sight of someone.  It’s only a matter of time before they’re linked to wedding bells and everyone lives happily ever after.  The film is silly fun and something of a weird delight, where anything resembling divorce or discontent is saved for another movie, as this one is all peaches and cream, where the romantic theme song written especially for the movie is reprised at the finale, “A Peach of a Pair.”
Posted by Robert Kennedy at 1:21 AM