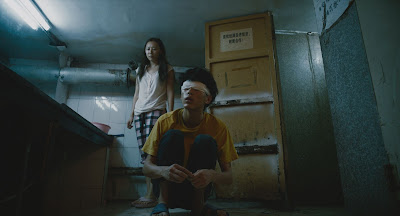 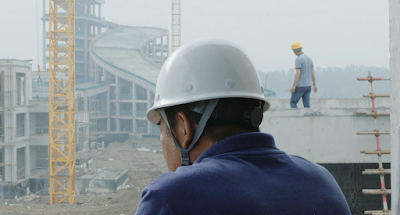 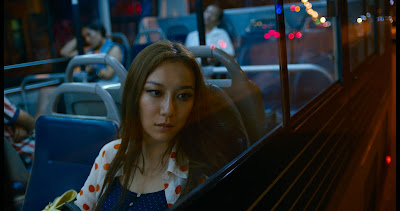 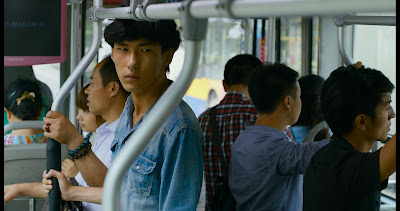 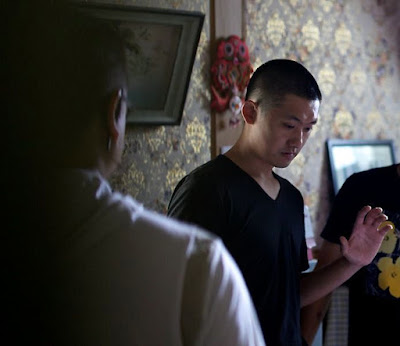 Director Pengfei on the set of Underground Fragrance (2015)


An example of an independent Chinese film made outside the commercial stream, this is an interesting experiment that doesn’t really work, stuck somewhere between a narrative film and one that is experimental, more of a quirky idiosyncratic film where one is never able to emotionally connect with anyone or grab any real sense of meaning or significance in this aimless and relatively indifferent story of broken dreams that suggests a certain fatalism about drifting through the swirling winds of change surrounding China’s abrupt transition into the modern world.  It’s an already familiar story shown in the abstract, an impressionistic mosaic that simply doesn’t provide anything new or revelatory to hold onto, where what’s uniquely interesting is not the story itself, but the manner in which its told, as the director has worked under Tsai Ming-liang, receiving one of the co-writing credits for Stray Dogs (Jiao you) (2013), while also working as a director’s assistant on FACE (2009) in Paris.  What’s missing here is the feeling of Tsai’s longtime connection with his actors, who work in a collaborative process with the director in achieving complex and often disturbing films with a remarkable impact.  So while there is some similarity in style, the impact here is minimal, as there is no connection to the characters, where the viewer is just as likely to drift off from lack of any genuine interest.


Set in the outskirts of Beijing, Yong Le (Chinese model Luo Wenjie) makes a living salvaging furniture from abandoned houses to resell, spending his days watching construction workers dismantle the old villages that can be picked clean afterwards, where the industrial landscape resembles a city in ruins, a junkyard of demolished houses and piles of abandoned items, a major contrast from the sleek skyscrapers of the nearby modern city.  Simultaneous to this story is another thread about an old man Lao Jin (Zhao Fuyu) and his wife (Beijing opera singer Li Xiaohui), living in nearly condemned property that they’ve been struggling to sell for years as the land is being bought up for a new development project of prestigious homes on a lake that is still in the early construction stages, yet the sales pitch is already in high gear, where the two are whisked away on a private boat ride and given a tour of the still unfinished buildings hoping to convince them now is the time, but the offer on their own home remains too low, so Jin holds out longer, hoping to increase the price.  A third story concerns Xiao Yun (Ying Ze), a migrant working as an after-hours pole dancer, for lack of a better job, remaining aloof and resistant to customer offers.


The atmospheric musical score by Jean-Christophe Onno is crisp and clean, given a percussionist flavor, where the common element throughout is an everpresent feeling of discarded items that contribute to a pervasive mood of continual isolation, extreme emotional alienation, and people working on the fringes of society who can barely make ends meet.  Yong Le eventually suffers a serious work injury leaving him temporarily blind for an extended period, seen with a bandage around his eyes crawling around the dingy and claustrophobic interiors of his labrynthian underground home, a former bomb shelter in Beijing’s Underground City, now used as cheap housing for drifters moving into the city, where he has to use a rope to find his way around the dimly lit basement halls, literally bumping into Xiao Yun at the other end of the rope, the girl next door who kindly offers assistance bringing him food and helping to take care of him, developing something of a wordless instant connection.  More of an atmospheric essay, the visual design of the film highlights an oppressive loneliness, showing a multitude of pedestrian street traffic in the sprawling city, where figures lost in the crowd become anonymous and indistinct, as Xiao Yun is also seen crossing the city on busses riding alone in the early hours of the day before having to make the same journey again later on that night, while without her help, Yong Le is decidedly more helpless and alone.


When Yong Le’s vision returns, he’s in some ways more blinded than before, as the girl he met while blindfolded has suddenly disappeared, leaving his future even more uncertain, retreating once again to the anonymity of the city.  While the film attempts to explore the damage caused by a seemingly endless stream of constant relocation to the big cities in China, particularly Beijing, in seek of work, painting a picture of a marginal social class of migrants that rarely interact, uprooted lives suddenly disconnected from their homes and families, this works more effectively with the basement dwellers who are drifting through, while the Lao Jin sections are more of a comic farce, displaying an exaggerated stubbornness well beyond reason that amounts to arrogance, proudly offering a sumptuous banquet to a well-connected political official in hopes of securing favor, even offering an accompanying dramatic presentation, where each drinks and joins in the singing, eventually giving away all his furniture and belongings, still holding out hope that he will receive a better offer on his home, even as the water and electricity have been cut off, leaving him a figure of abject failure.  Suffused with melancholy and a pervasive sadness, the vacuousness of the film itself overrides any central themes or message, shot in static long takes, becoming a meandering exercise of futility, where the real struggle is enduring a continuous, one-note tone of apathy and indifference.
Posted by Robert Kennedy at 12:00 AM