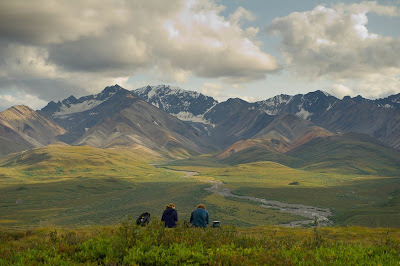 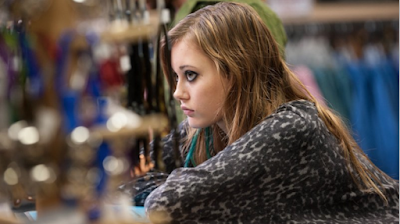 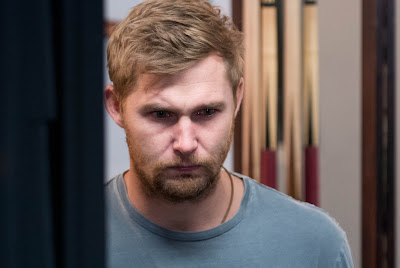 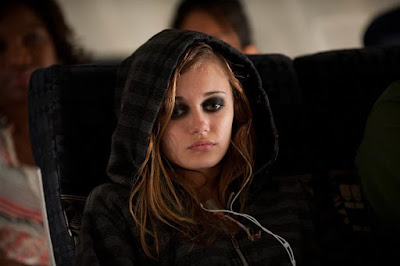 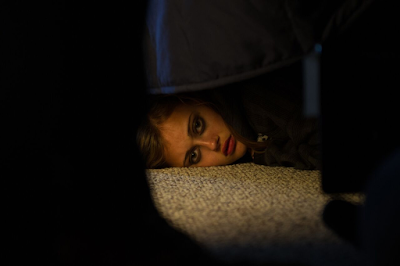 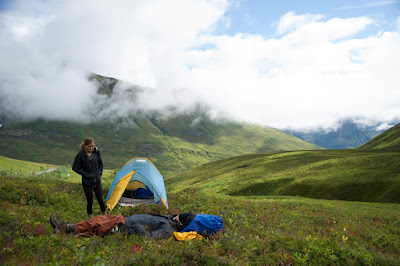 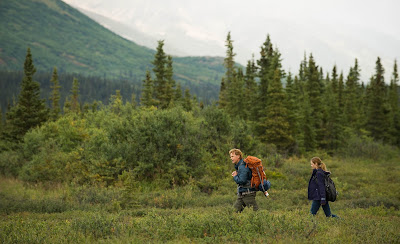 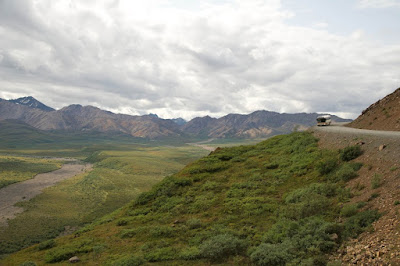 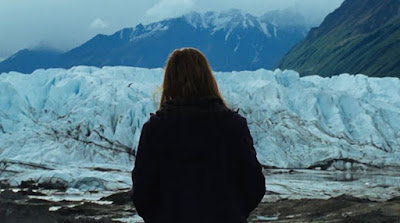 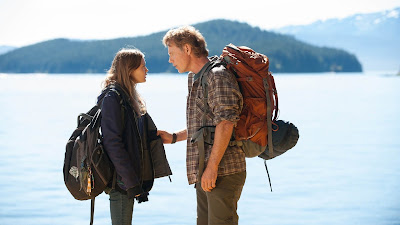 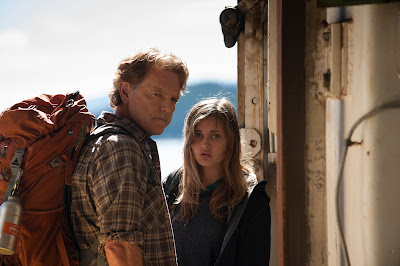 Not your typical picture, as this one has a rhythm and tone all its own and grows curiously more interesting, something of a feminist variation on THE STRAIGHT STORY (1999), a lonely trek through a vast wilderness precipitated by tragic events, where the common element in each is the decency of the human condition.  Perhaps the biggest drawing card is the expansive and breathtaking backdrop of the Alaskan frontier, shot by Hillary Spera on 35mm film, though most likely projected digitally in nearly all theaters, which allows viewers an altogether different perspective than most unfolding dramas, as the splendor of the natural wilderness in typical John Ford fashion takes center stage, becoming the most dominant overall characteristic, taking the place of the cramped artificiality of Hollywood studios.  At the center of the story is a lone 14-year old girl, Mackenzie (Ella Purnell), seen traveling by herself from Seattle to the airport in Juneau, Alaska, where she’s picked up by her uncle (Brian Geraghty), feeling none too pleased about the idea, barely uttering a word.  In an odd choice, the uncle is never even listed by name, even in the credits, making him a completely anonymous character that could be anyone.  While he tries to make her feel at home, she’s obviously troubled by recent events, which include the death of her father, while her mother has entered a residential treatment program for something unmentionable.  Having no friends in the area, and no place to go, Mackenzie feels completely disconnected, totally dependent on her uncle to show her the majestic beauty of Alaska.  What impresses her the most, however, is the smartphone he buys her, which raises her spirits immensely, finally feeling more relaxed and happy.  In a peculiar move, her uncle sneaks into her bedroom late one night after she was asleep and takes advantage of her, where her response can be seen in the emptiness of her eyes, becoming a sexual occurrence that unfortunately repeats itself, usually followed by some intimate conversation about how they have something “special” together according to him, already perceiving the two of them as a couple together.  While her demeanor reflects no reaction whatsoever, her first sign of life occurs while visiting the Mendenhall Glacier with her uncle and another leering guy friend he brought along, where her uncle has bought her a pair of hiking shoes specifically for the occasion.  She bolts at the first opportunity, quickly realizing how difficult it is to escape Juneau, as it is bordered completely by mountains and water, where there are no roads out.

Left to her own devices, Mackenzie immediately feels trapped, apparently unwilling to go to authorities, where she has to rely on unconventional methods that border on the bizarre, trying to find a trusting face, or a safe place to hide, eventually following the morning crowd to the ferry, where purely by chance, she latches on to someone she rather awkwardly met earlier, though from a distance, so he had no idea she was following him until a tour bus dropping off hikers in the middle of the Denali National Park exits the premises, leaving her alone with a middle-aged man, Rene Bartlett (Bruce Greenwood), whose intentions are to backpack into the interior of the park.  Without a word, she simply follows from a safe distance, though he can’t comprehend what’s happening.  Instructing her on hiking etiquette, he informs her that what she is doing is inappropriate, as hikers are solitary creatures, often for their own personal reasons, where it normally requires a good deal of preparation “prior to” the journey, meticulous planning that goes all out of whack when he’s traveling for two.  Nonetheless, she resists each and every opportunity offered and follows anyway, offering no explanation whatsoever, which is a bit disturbing, but despite his obvious exasperation, he can see she’s completely ill-prepared for a trip into the wild.  What follows is a near wordless trek through the heart of Alaska, hiking throughout the day, where they appear small against an enormous landscape of mountainous beauty, but also unforeseen dangers, as later he skillfully sets up camp, prepares a meal, and allows her to sleep in the tent while he sleeps under the stars.  Unfolding gradually, the pace of the film slows to take in the grandeur of the Alaskan interior, where the film bears some resemblance to Julia Loktev’s  The Loneliest Planet (2011), but the focus of this film is less on the physical movement of hiking itself and more on the psychological mystery brewing within.  Eventually becoming more cooperative, there is a brief window into the scarred souls of each of them, where Rene acknowledges his trip was a planned tribute to his late wife, as they both enjoyed hiking together in Alaska, while Mackenzie acknowledges the recent loss of her own father.  Without actually bonding, the audience senses a redemptive power in their journey, while also reminded of the looming presence of her uncle, who is leaving tons of email messages on her phone.  Curiously, the director made a similar journey backpacking into the Denali National Park with his wife for 8 days in 2003, where his fictional film characters follow many of the exact same locations.

Along the way, they meet a bush pilot (Ann Dowd) out in an open expanse along with a man who designs kites, testing his product flying high up in the sky, where this strange interlude offers a temporary respite, a safe haven from a tumultuous world, where campfire discussions have a calming influence.  It’s only later that Bart begins to realize the gravity of the situation, seeing Mackenzie ignore the constant messages coming into her phone, where he has a chance to glance at the obnoxious messages streaming in from her uncle, who has resorted to stalking her, even sending the police after her as a missing runaway teen, where in the messages he’s blaming Mackenzie for what happened between them.  In a panic, all she can do is run away when the police get too close, where the story becomes an entangled journey of evasiveness, as sexual abuse affects everyone differently, but children especially are the most vulnerable, often targeted by a family member or someone they know, leaving them confused and distrustful, where it’s often difficult to navigate their own path to recovery afterwards.  Mackenzie simply doesn’t want to deal with her uncle ever again, preferring to put him out of her mind, yet his hounding presence adds an element of horror that continually plagues her.  The film is to be credited for refusing to explain itself as it goes along, becoming more of a challenging experience, doling out only pieces of the puzzle, where the audience is often as confused as she is, especially the unconventional methods she takes to protect herself, never explaining anything to anyone.  Symbolically, Bart becomes her father figure, stepping in as the father she no longer has, offering her guidance and protection from harm, while she becomes the child Bart and his wife never conceived.  The difficulty for Bart is figuring it all out without ever hearing a single word from Mackenzie, who has simply shut out this particular tragedy, as she’s not in a position to save herself, whose only thought is returning to Seattle under the protection of her mother.  With her uncle constantly on her heels, showing up when she least expects him, probably tracking her from the phone he gave her, her options are minimal, where it’s curious how the immensity of the Alaskan landscape so perfectly expresses the vastness of her interior psychological trauma, with the world eventually closing in, where she becomes instead a trapped animal in a cage.  Rather than developing into a chase movie, fraught with action scenes, this takes place almost entirely in her head, revealed through facial expressions, where there is a remarkable dynamic of the prominent characters that only reveals itself over time, becoming a series of incidents, random moments, and a few thoughts shared together along the length of their journey that allows Renee to finally “help” Mackenzie in his own way.  It may not be what anyone expects, and no strategy is ever discussed, but Bart’s inherent kindness adds a note of optimism in an otherwise brooding interior/exterior mystery.
Posted by Robert Kennedy at 12:02 AM