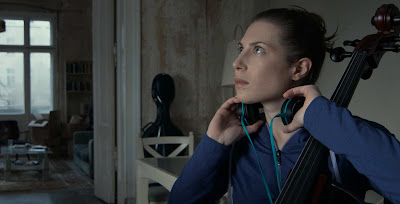 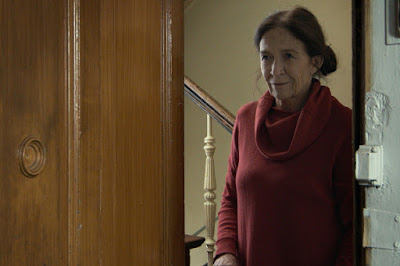 A German battle of wills movie about an odd set of neighbors that grows more psychologically disturbing, accentuating the idea of taking things the extreme.  While there are other variations on this theme, including American examples that include D.J. Caruso’s DISTURBIA (2007) or Neil LaBute’s LAKEVIEW TERRACE (2008), where in each case the focus is on the extreme behavior of the demented neighbor, what sets this film apart is its extreme degree of politeness and civility.  Shot in Berlin, a young couple, Jessica (Esther Maria Pietsch) and Lorenz (Matthias Lier), are ecstatic about moving into their spacious new apartment, an old building with arched ceilings and windows allowing plenty of light, offering a cavernous interior expanse, already entering into the psychological realm, expressed with a series of cold, austere shots of an empty apartment from cinematographer Christian Trieloff.  An upwardly mobile couple pleased at the discovery of such a stylish old-world place to live, she is an aspiring cello student while he’s a physiotherapist at a local school.  With help from friends, their apartment soon fills up with furniture and personal belongings, where the young group celebrates afterwards with food and music, causing a bit of a ruckus, as an elderly upstairs neighbor, Hilde Domweber (Tatja Seibt), identifying herself as the building’s unofficial caretaker, knocks on their door requesting quiet, as there are many elderly inhabitants not used to a display of such youthful exuberance.  Apologizing profusely, the young couple delivers a peace offering the following morning that is graciously accepted, though Hilde indicates a concern that the demographics of the neighborhood are changing, as many of the longtime older residents are being replaced by a much younger generation that may not share similar interests, offering them in return a strange (and somewhat ugly) figurine as a welcoming gift.  Certainly one of the striking aspects of the film is the overall blandness of the youthful characters, where there is nothing drawing attention to any one of them, as they all appear equally anonymous.  The gray, colorless look of the interiors adds to this dulled perception, as there’s a bit of gloom in the air.

Jessica, in contrast, is in exceedingly good spirits as she’s recently been selected to represent Germany in an international Young Classical music contest in Moscow, a huge national honor and a matter of great personal prestige, where her outlook looks exceedingly bright, receiving intensive instructions from the music instructor that recommended her, whose message is:  “It’s the subtle nuances.  They make the difference,” requiring uninterrupted practice time, where she’s seen rehearsing Bach-Cello Suite no.5 In C Minor, BWV 1011 - Prelude (1/6), Pablo Casals (7:18).  Once Lorenz is off to school, Jessica plugs in her electronic practice instrument that she hears with headphones, literally inhabiting her own private domain.  In keeping with Berlin traditions, the apartment has no curtains, allowing the upstairs neighbor to spy on her practice session from an overlooking window, causing a certain amount of distraction and apprehension, as Jessica feels she is invading her private space.  While Lorenz suggests putting a curtain in the window, Jessica is quick to defend the “open” space, claiming she doesn’t want to lose it, as it’s in keeping with the openness of the creative process as well as the special allure of their home.  Rather than spend afternoons alone, she brings back a tiny kitten to keep her company, placing a little collar around her neck for identification.  Each time she takes out her cello, however, she is interrupted by some mysterious distraction, including repeated rings at the front door, yet there is no one there.  Worst of all, someone leaves a large pile of animal feces on her welcoming doormat, though no other pets are known to be in the housing complex.  Earlier in the day, when taking out the garbage, Jessica nearly collides with Hilde, as if she has been lurking just outside her door, while late at night, she is awoken by inexplicable hammering coming from the apartment above hers.  When her kitten disappears, Jessica is certain she the subject of a harassment campaign, where her neighbor seems to be taking an unusual delight in her misery, though in contrast to the spaciousness of the opening, the four walls seem to be closing in on her, though one thinks she could be succumbing to the enormous pressure of stress as the music competition nears.

The director does a good job blending the reality of Jessica’s everyday life with a blurring of the imagination, where a chain of unfortunate events begins to eat away at her.  Jessica and Lorenz attempt to clear the air with the neighbors by having a nice uneventful dinner together, where the glee expressed by Hilde’s husband Helmut (Hermann Beyer) when showing Lorenz his prized gun set should be enough to alert anybody, but Lorenz, especially, who is gone all day at work, remains clueless, showing little empathy for Jessica’s deteriorating condition.  When she finds the kitten’s collar hidden in Hilde’s home, she goes ballistic with accusations of cruelty and intentional provocation, which only grow worse when she later discovers the dead animal in the laundry room.  Outraged to the point of furious indignation, she once again confronts Hilde on the staircase, hurling charges that bring other residents out into the hallway, publicly condemning the woman as the scourge of the earth, but no one else has noticed anything remotely suspicious, leaving Jessica seething alone in a blistering rage, where Lorenz has to kindly walk her back to her apartment, where the unsettling situation has gotten out of control, where he no longer believes in her credibility, feeling she may have gone over the edge.  When her music instructor pulls her out of the competition, noticing her nerves are frazzled and her skills regressing, Jessica only grows more entrenched, going into combative warrior mode, convinced this woman is a menace and determined to put an end to it.  The manifestation of her increasing anxiety is all the more alarming by focusing so completely on her restricted and suffocating space inside her apartment, growing increasingly tense and paranoid about the rising dangers of the world outside.  It’s an interesting take on the plight of urban living, locked behind sophisticated security systems designed to keep undesirable forces out, turning the concept around where stuck inside with no conceivable way out lies a poisonous atmosphere growing increasingly toxic and insufferable, literally testing the limits of one’s sanity when forced to endure these dehumanizing conditions.  While the film remains minimalist and low key throughout, it does a good job accentuating Jessica’s internalized fears and growing paranoia, developing into a twisted and psychologically altered form of hysteria that continually distorts reality, delving into horror territory, where a simple note in the final credits, “Dedicated to my neighbors,” is sure to get a chuckle from the audience.
Posted by Robert Kennedy at 12:11 AM