In the Shadow of Women (L'ombre des femmes) 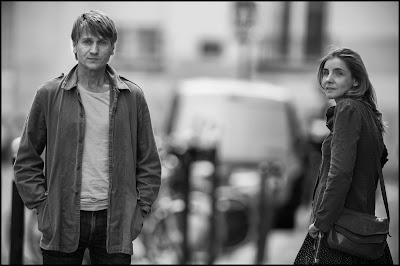 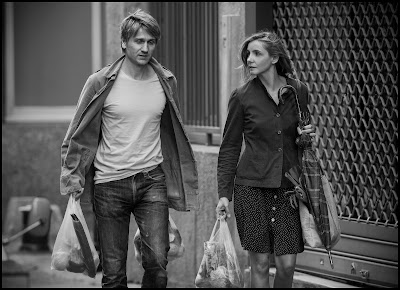 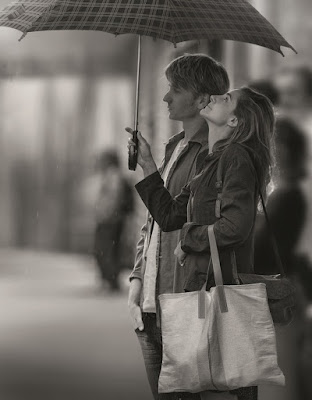 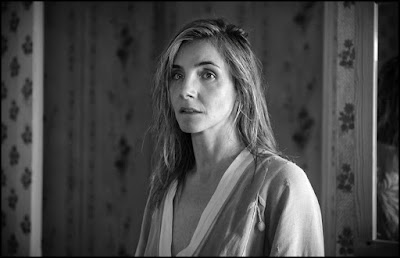 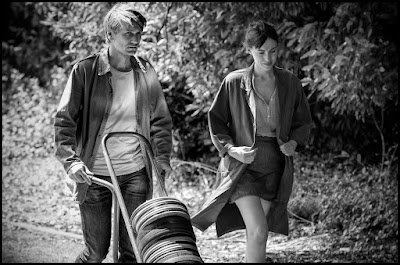 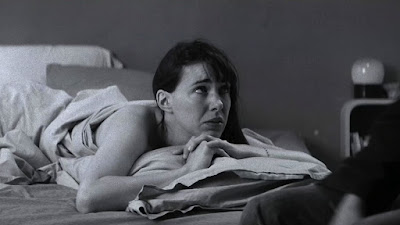 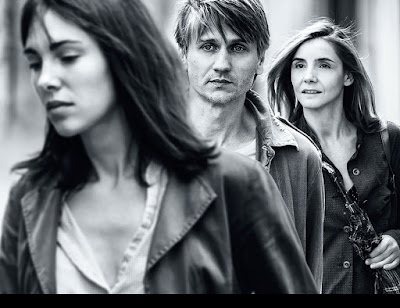 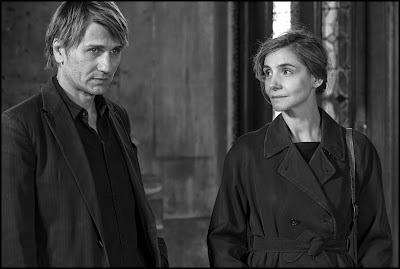 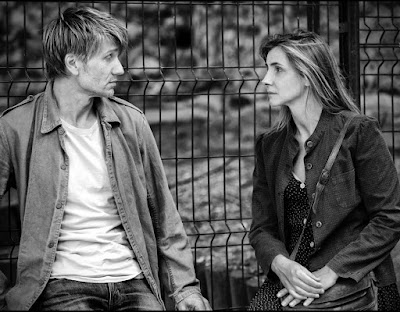 In the Shadow of Women  (L'ombre des femmes)       B-
France  Switzerland  (73 mi)  2015  ‘Scope  d:  Philippe Garrel
This is as bleakly minimalist and understated as a film can be, telling an age-old boy meets girl story, then boy meets another girl, and girl meets another boy, and there you have it.  That’s pretty much it, though the film is beautifully told in a streamlined, French New Wave, black and white style, shot on 35 mm, cinematography by Swiss cameraman Renato Berta, who has himself worked with Godard, using free-flowing, naturalistic dialogue, weaving in and out of the streets of Paris, all told with a monotone narrator that is right out of early 60’s Godard.  One’s appreciation for this film is likely to fall into the non-theatrical camp, as emotions are minimized, absurdity elevated, where the sexist, male-centric tone throughout where men continue to see themselves as the center of the universe, where everything revolves around them, is not likely to win any new converts.  It is this narrow lens through which the world is continually viewed that makes this feel like a time capsule from another era, as aside from the use of cellphones, there is little suggesting this film wasn’t made a good half century ago.  Philippe Garrel got his start making films in the 60’s, largely influenced by Godard at the time, so he’s no stranger to the milieu, though why he’s still churning out films like this is anyone’s guess, as it’s certainly within his comfort zone, taking a step backwards from Jealousy (La Jalousie) (2013), which was itself a remake of his second film made at the age of 17, a fifteen-minute short DROIT DE VISITE (1965).  Opening in Director’s Fortnight at Cannes, the problem with the film is that it feels very formulaic, like we’ve seen it before, literally light years away from the brash cinematic energy exuded by Léos Carax in Boy Meets Girl (1984), or even the jump cuts from Godard’s BREATHLESS (1960), where it’s a return to a simpler age, as if we’ve never left.  While working with his wife Caroline Deruas and familiar screenwriter Arlette Langman, who got her start working with Maurice Pialat, what is different about this film is the use of writer Jean-Claude Carrière, a screenwriter for both Buñuel and Godard, though admittedly not in the last 30 years or so, placing this film in a kind of time warp, though it certainly adds a wry humor that is missing from the director’s other films.

Pierre, Stanislas Merhar, who was in Chantal Akerman’s THE CAPTIVE (2000), is a somber, somewhat pompous director, while his wife Manon, Clotilde Courau, aka Clotilde di Savoia, Princess of Venice (Zimbio), works as his editor, where together they make documentary films that seem to be on the fringe of the industry, and while they are just scraping by, they’re committed to the kind of unvarnished work they produce, sharing an inherent need for discovering truth (vérité) in cinema.  Currently they are interviewing Henri (Jean Pommier), an aging survivor of the French Resistance, where Manon views her husband as an elite photojournalist on the verge of discovery as opposed to the hack he really is.  Despite the appearance of a happy marriage, where Manon’s mother (the brilliant Antoinette Moya) has some serious doubts about their sputtering careers, thinking she’s giving her husband far more credit than he deserves, reminding her daughter, “No man is worth sacrificing your life for,” then the first thing we see Pierre do is cheat on her, showing extra attention to a young intern named Elisabeth (Léna Paugam), literally following her home with a truckload of borrowed film canisters from a film archive that he utilizes, where he justifies his affair “with typical male equivocation” in a narrative voiceover spoken by the director’s son, Louis Garrel.   Believing he’s only doing what any man would do, where he skillfully balances his time between the two women, but he makes the classic mistake of bringing his wife flowers, which she immediately recognizes as a typical male ploy to cover up illicit behavior.  Of course, he denies having any such intentions, so the audience instantly sees the man as a fraud and a scoundrel.  What’s amusing about this particular story, however, is the way the interior narration continually justifies his boorish behavior, as if this is the right of every man.  Elisabeth, meanwhile, follows Pierre home to spy on her competition, as he’s not spending as much time with her as she’d like, only to discover Manon is having an affair of her own, which sends Elisabeth into the throes of depression, as if it reflects poorly on her to cheat with a man whose wife would cheat on him.  God knows what this all has to say about marriage, but more likely it reveals the director’s own views on monogamy, that it’s an outdated concept worthy of ridicule.

While each goes to great extremes to keep their affairs hidden, both are eventually exposed, revealing jealousies, petty resentments, and a good deal of betrayal felt by each, where Manon tends to be more mature and understanding, while Pierre goes into full-throttle anger mode, showing little consideration, an extraordinary amount of disdain, literally seething internally, expressing hurtful behavior towards both women.  What makes this borderline ridiculous is the contemptuous display of brooding arrogance shown by Pierre, the wronged man, feeling trapped and blaming it all on the women, as if he bears no personal responsibility.  This moral hypocrisy literally blows up their marriage, as Manon is rightfully offended by his deluded, self-centered point of view, thinking entirely of himself throughout the ordeal, as if he is the only offended party.  This kind of thinking is simply outdated, as it’s outrageously out of touch with contemporary French society, where women have evolved beyond his pouting adolescence and wouldn’t spend their time with a manipulative egotist like this, as he’s exposed as a hypocrite and a fraud.  Even the documentary they were working on blows up in their face, in an amusing twist, but Garrel loves to pour out confessional male anguish along with feelings of hurt and alienation, but it’s getting to be old hat with this director, where women can come to his films to point out what “not” to do in personal relationships.  Promising more than it delivers, becoming a relationship in miniature movie, pared down to its pure essence, the real problem is the realization that this is really all there is to this film, where it doesn’t delve into the inner complexities of either character, but is content to dramatize the more obvious superficialities, highlighting how easy it is to break apart.  Little effort is made to actually repair the damage done, as Pierre becomes so condescendingly sure of himself that he’s not willing to waste any more time on a woman he loathes and finds despicable.  It’s such a narrow, anger-fueled perspective that the audience is light years ahead of this guy, as he’ll live to regret this decision, as Manon may turn out to be the love of his life, but he is so willing to devalue her and throw it all away.  While well-made, with all that’s going on in the world today, not sure that what we need is another battle of the sexes movie, as it’s well-worn and fairly trite material, where this film adds little to the perspective while retreading familiar grounds.
Posted by Robert Kennedy at 12:01 AM