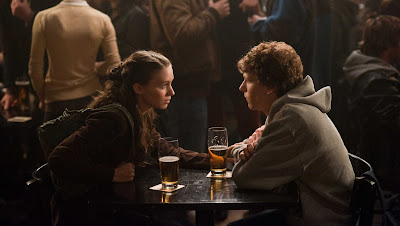 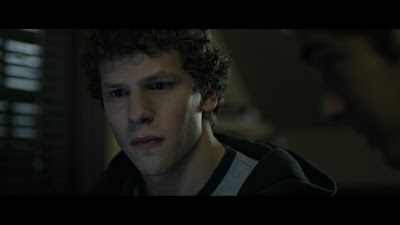 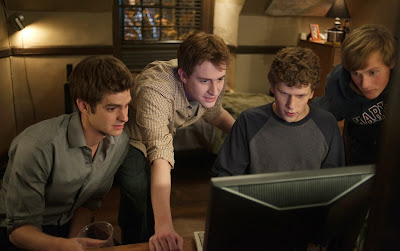 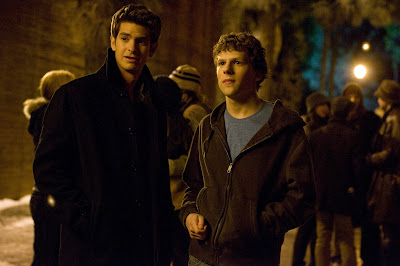 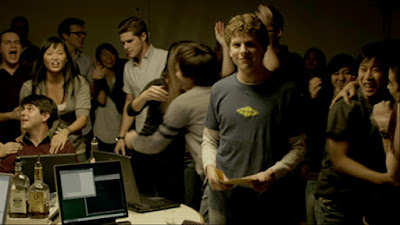 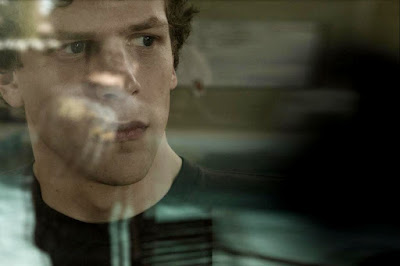 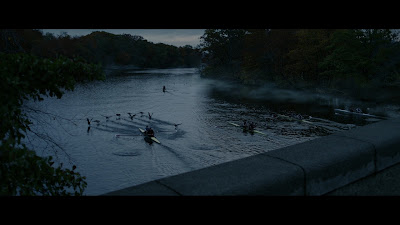 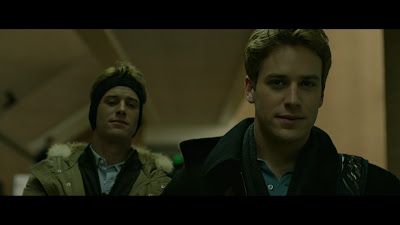 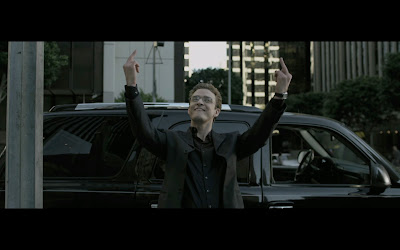 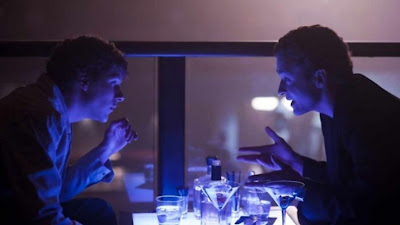 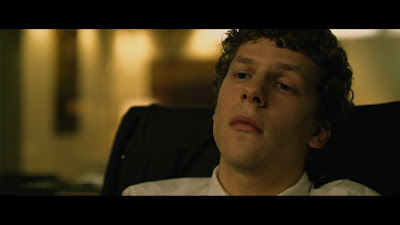 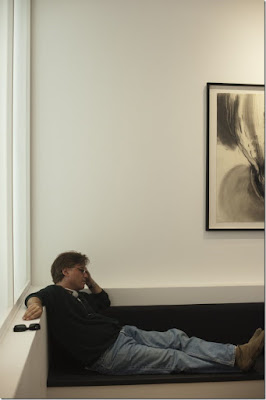 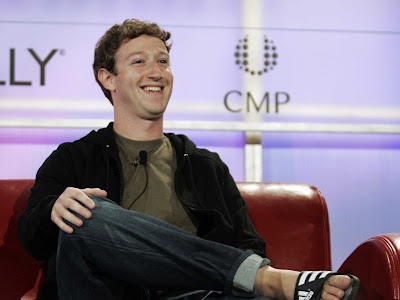 So this is what Aaron Sorkin has been up to?  The opening 5 minutes of this film is a blast of blistering energy, a hilarious comedy satire of Sorkin-written dialogue, where like a speed chess match it movies quickly with verbal sparring and jabs, where one’s attention is simultaneously on several things at once, responding to comments made two or three moves back.  This is assaultive dialogue, where words are spoken with a vehement purpose and hurled with a furious intent to do harm.  This short sequence plays out like the language of live theater before the opening credits begin and is the premise for the rest of the film.  Jesse Eisenberg, more mature and confident here, never better, is Mark Zuckerberg, a brilliant 19-year old Harvard sophomore in the fall term of 2003 having a conversation in a bar with Erica Albright (Rooney Mara), another bright student who finds his manner obnoxious and offensive, blind to the views of others, making it clear to him that she’s rejecting him not because he’s some geek or a nerd that she doesn’t like, but because he’s an “asshole.”  This is the predominate theme for the rest of the film, as it immediately prompts his wounded male pride to go back to the dorm, drink a few beers, and in the course of four hours, with the help of a few dorm roommates, invent a computer template for Facebook, though this initial version was called Facemash.  Driven by a seething adolescent resentment, while simultaneously making vicious personal blog entries calling the young woman a bitch and making unflattering references to farm animals, Zuckerberg spent his time hacking into the database of nine Harvard dormitory resident computer files and stole all the female photos, updating the women into a comparative side by side photo contest called “Hot or Not,” where the Harvard students could pick the hottest between two photos, which generated 22,000 hits in just the first four hours online before crashing Harvard’s servers, cementing his legendary status on campus as a geek genius loathed by women who weren’t happy about having their pictures stolen and then placed on exhibition for fratboy male appraisal.

What really works here is the level of free-wheeling viciousness on display right alongside continual outbursts of supreme intelligence, both signs of a Sorkin screenplay, loosely adapted from interviews and Ben Mezrich’s book The Accidental Billionaires.  Fincher’s accelerating speed however is especially notable, as the furious pace shows the exuberance of youth like few other films, where these guys are incredibly focused on their creation, like the two geeks in PRIMER (2004) who invent a time machine in their garage, but this invention generates instant recognition around campus, something most geeks never receive.  Zuckerberg eventually refines his idea, but only after the prompting from a couple of prospective Olympic athlete rowers, Cameron and Tyler Winklevoss (both played by Armie Hammer using the latest in digital technology), identical twins who patronizingly promise to rebuild his damaged reputation through the prestigious hallowed grounds of their all-male Porcellain Club, supposedly the pinnacle of privilege and social success at Harvard, if he would build them a social media website that could connect Harvard men exclusively to other schools around the country.  From this dare, per se, Zuckerberg on his own, with the help of his roommate Eduardo Saverin (Andrew Garfield) launches Facebook in February, 2004, a site where friends can upload their own comments and pictures to share with other like-minded friends, “taking the entire social experience of college and putting it all online,” an idea that explodes with popularity.  The irony, of course, is that these two are socially awkward but extremely bright kids using their knowledge to actually invent something completely foreign to their own personalities, having few friends and even fewer girls, yet these socially dysfunctional people invent the most popular Internet site ever devised driven by a desire to increase their chances with the opposite sex by promoting a computer social networking site for people to share with their friends, a particular social commodity they don’t have.  In a sense, they create a virtual world, where the thrill is watching the intense reaction by others while the originators of the idea remain aloof, socially inept, and forever locked behind computer screens, which pretty much defines the detached nature of new age friendships, where one out of every fourteen people in the world has a Facebook account.

What follows, of course, are the inevitable sour grapes lawsuits, where the success of the website is beyond anyone’s wildest comprehension, so people want a piece of it, where both the Winklevoss twins and Zuckerberg’s only friend in the world, his roommate Eduardo, each claim this was partially their idea.  Zuckerberg’s response:  “If you guys were the inventors of Facebook, you’d have invented Facebook.”  While we hear depositions being taken with lawyers in private rooms, where Zuckerberg occasionally interjects his candid comments which cut right through the legalese, as he continues to exert his mental superiority even as he’s being sued for hundreds of millions of dollars, we also see the tragic and senseless deterioration of his friendship with Eduardo, who fronted the original money to get Facebook started, enough to hire a few programmers who could connect them to a few other Ivy League schools, also Boston University and Stanford, but the project continued to expand.  Zuckerberg eventually meets Sean Parker (Justin Timberlake), the founder of Napster, a site that downloaded music for free, who had already gone through the litigation process with the music companies, so he had a track record and awareness, as he was also a computer savvy guy who could help incorporate and expand Facebook into other continents.  He interested Zuckerberg immediately, as Parker could introduce them to some investors and he knew they should never settle for nickel and dimes when this idea, which he calls “a once-in-a-generation, holy shit idea,” was worth billions.  His influence and Silicon Valley West coast connections eventually replaced Eduardo, who kept insisting early on that they advertise on the site, where Zuckerberg and Parker disagreed, thinking they would lose the “coolness” of what drew kids to the site in the first place, so they were inclined to keep the site free from aggravating and unnecessary pop-ups, receiving hefty investments from PayPal founder Peter Thiel until eventually Microsoft in 2007 purchased the right to place ads on Facebook which placed the value of the company around $15 billion, making Zuckerberg at age 23 the youngest billionaire in history.

The film’s real success is being able to trace the root of such monumental changes in our lives in just the past few years, and doing so with complete coherence.  Fincher’s editing throughout is superb, as he seamlessly jumps back and forth between conflicting information being revealed in the lawyer’s offices which is then seen in fuller detail through flashback sequences where it all plays out, where it’s hard to keep track of the timeline involved, so the audience is never sure about the chronological order of events.  This method mimics how the Internet is used, freely moving back and forth in time seemingly at random, depending on how it’s being used.  One of the more dazzling sequences is watching the Winklevii twins, as Zuckerberg sarcastically calls them, at a boat race regatta which is scored to the frenzied crescendos from Grieg’s “In the Hall of the Mountain King,” Grieg - In the Hall of the Mountain King - YouTube (2:41).  What’s especially purposeful is the way the computer storyline connects to an international athletic event, and where the twins are humorously portrayed as notoriously sore losers.  The twins, by the way, eventually placed 6th at the Beijing Olympics for the men’s pair rowing event, but their careers are really structured around winning a $65 million dollar settlement, a nice tidy sum which should help solidify any of their financial concerns.  No one comes across unscathed in this film, though Eduardo may be the most sympathetic, if naïve, character, while what remains fascinating in the portrait of Zuckerberg is the way he continually relishes flaunting his condescending air of superiority while he remains flummoxed and dumbfounded by the negative impact this has on others, where his otherwise intensely shy and vulnerable side remains hidden, safely protected behind a firewall of new age gadgetry.  For every new door he opens, he slams several others shut behind him through sheer arrogance and a fondness for humiliation.  What is clear, however, is the frantic and hilarious pace of the opening eventually slows down when they leave college life for the West coast, where youthful ideals soon become replaced by hardcore business decisions and personal betrayals, where people, especially those closest to you, can get hurt by petty grudges that certain individuals retain seemingly forever.  Zuckerberg is no exception.  What’s truly remarkable is that this is one of the most extraordinary responses to being rejected by a girl, though who knows, Shakespeare may have been similarly motivated.
Posted by Robert Kennedy at 12:00 AM