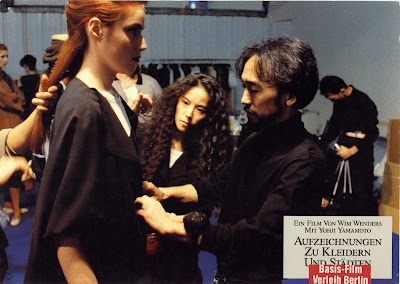 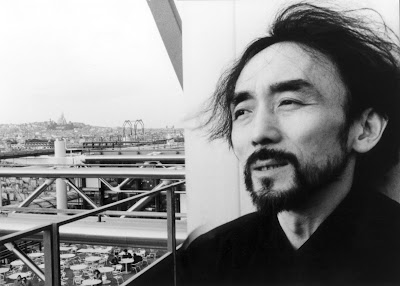 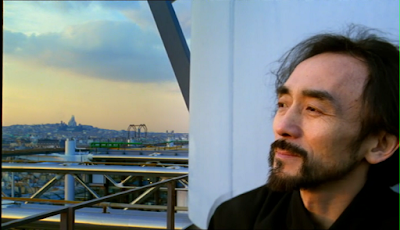 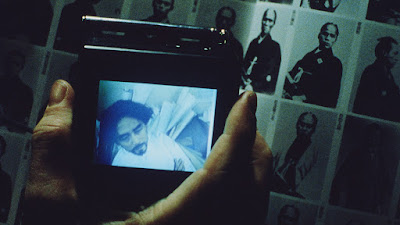 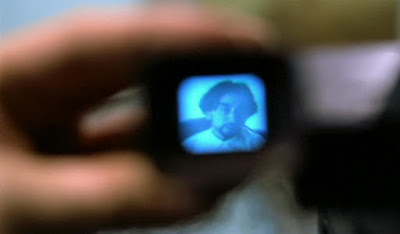 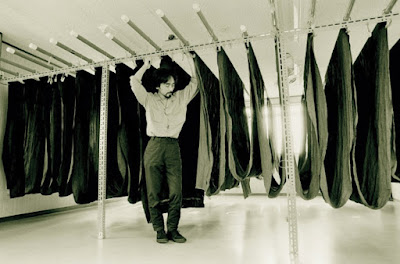 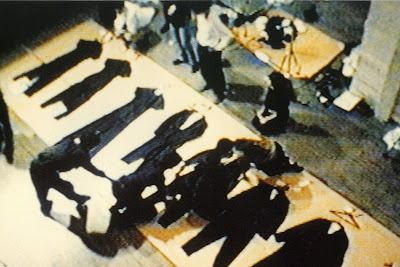 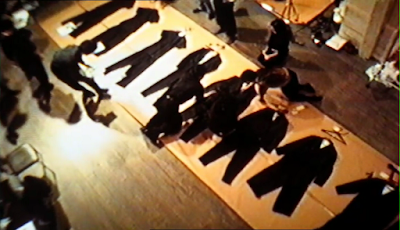 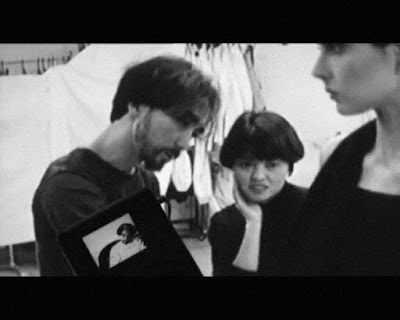 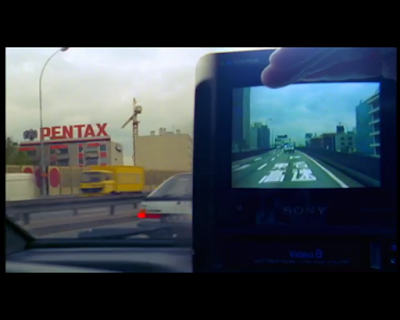 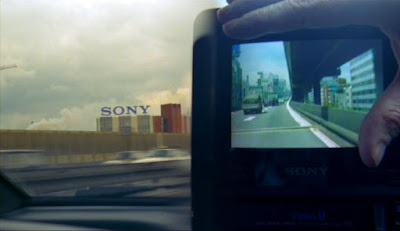 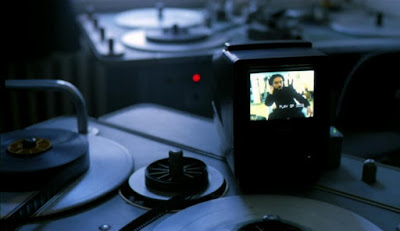 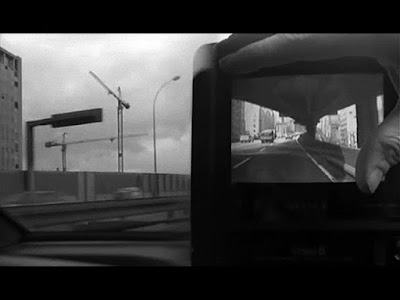 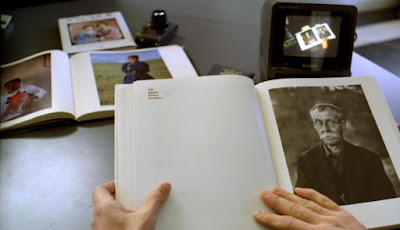 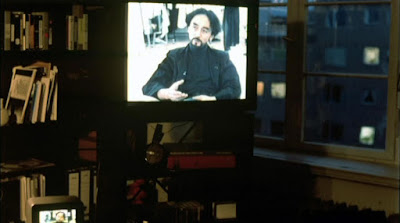 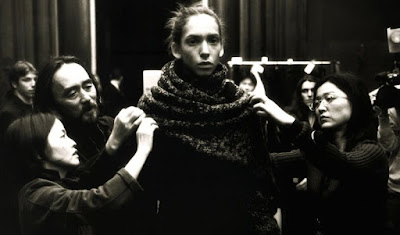 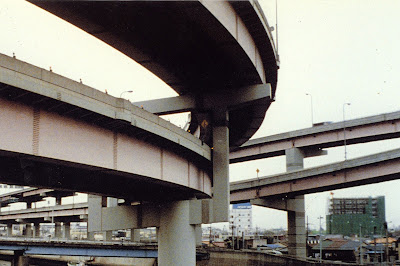 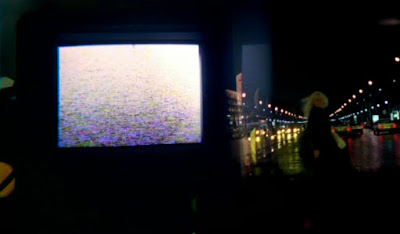 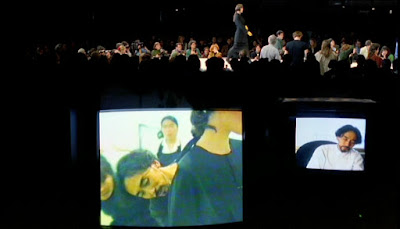 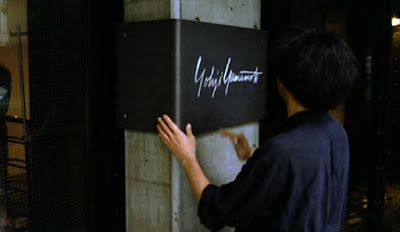 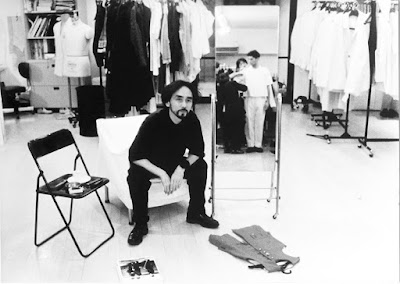 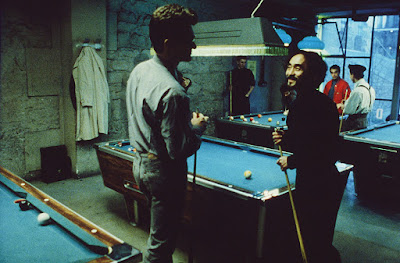 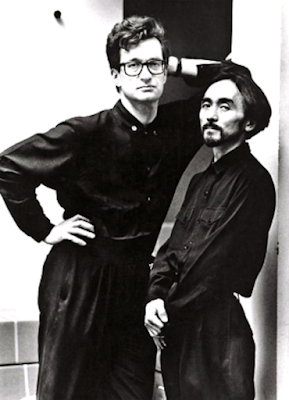 
“When you don’t understand somebody else’s craft, the first questions are usually very simple: where does your work begin?”


This seems to be exactly where Wim Wenders planned to start his study on the Japanese fashion designer Yohji Yamamoto, whose name is credited right after the filmmaker himself, appearing as “A Film by Wim Wenders with Yohji Yamamoto” in the title sequence of Notebook on Cities and Clothes.


“Fabric, material, touch, then I go to the forms,” answers Yamamoto, in a scene where the image of him appears on the screen of a tiny monitor placed on Wenders’ editing table, and the entire documentary could not be better summarized by this very moment. An artist explaining his own working methods becomes the material to examine by another artist from a seemingly disconnected field, but the idea, we learn from watching the film, is surprisingly the same.


Wenders, too, starts from his fabric and material, images taken respectively by a handheld video camera that goes everywhere with him, filming continuously and silently, along with a 35mm camera that has to be rewound after every minute, fixed on a tripod and as noisy as a sewing machine. Completely different entities back in 1989, when digital image was still a relatively new medium to be experimented with in “mainstream” filmmaking. As a result, the film looks like a collage between these two types of images, either separately or in juxtaposition, where, in several scenes, the composition could be as complicated as placing two video monitors in front of a live fashion show, with different footage seen on each screen, while filming it all on 35mm celluloid. The sound of Yamamoto talking is often barely audible when it comes from the speaker on a digital monitor while also being recorded with the 35mm camera, where the noise remains as loud as it can be. Raw material, intentionally presented to the viewer, is shouting out for attention to the last bit of its originality that, Wenders worried, would soon be lost in the era of “electronic images” where the original print captured on a celluloid negative would cease to exist.


Identity, a word singled out by the filmmaker at the very beginning of the film, is a theme he has kept exploring throughout his career. What is identity? In other words, what is unique, in a person, a film, an image, or anything, when “everything changes, and fast?” “Everything is a copy,” claimed Wenders, who was apparently frustrated but at the same time inspired to make this documentary about fashion and one of its preeminent creators, commissioned by the Centre Georges Pompidou in a field he knows little about and has next to nothing to say. Fashion, exactly. What could be further away from protecting one’s identity than fashion, which, by definition, is aimed at setting up trends for everyone to uniformly follow? After all, while filmmakers have only recently encountered the issue of artistic identity with the coming of digital images versus celluloid, the clothing industry has been living with it ever since machines replaced hand manufacturing.


But Yamamoto is different, discovered Wenders, who bought a shirt and a jacket of his design, put them on, stood in front a mirror and found a “strange sensation” that in them, he was no one but himself and his identity felt like “a knight protected in his armor.”


“In the mirror I saw me, of course, only better, more me than before.”


For Wenders, this is usually everything he needs, a moment that brings out the best in him as a documentarian, a master of cinematic portraits of other artists, proven by what he did with a group of Cuban musicians in Buena Vista Social Club, or more recently with the photographer Sebastião Salgado in The Salt of the Earth. In Yamamoto, he found a new mirror.


“Who is he? What secret has he discovered, this Yamamoto?” Wenders started studying his subject with a mind full of questions, but did he find the answers at the end? Well, from a film that barely runs over 75 minutes, we do get a few glimpses of Yamamoto working or talking about himself. We learn that his father died in the war, and he looks for inspiration from photo books of people in the 20th century, but what else? “What did Yamamoto know about me, about everybody?” Wenders seems eager to find out, and so do we, but we are not even offered a closer look at the fashion show, or the finished design, in a documentary about a fashion designer! What the hell, Wim? After all the time you spend with him and all the discussions, what do you know now about this Yamamoto, just like what you know about every artist you have ever worked with?


Wait a minute. Really, what does Wenders know about Salgado, Ozu, or a bunch of retired musicians in Cuba? When we revisit these films after a while, all we remember seems to be music on the streets of Havana, the city of Tokyo or the beauty and horror a photographer captures in whatever experience he has gone through, while the subjects, the artists, have remained misty, but living and breathing through their creation, their craft, so the work also comes alive. That is the magic of a Wenders documentary. It starts with music, pictures and cities and goes full circle to, again, music, pictures and cities. Rather than focusing on the artist or the art, it is much more about what is in between, where one feels what inspires art as much as what art can inspire. That is Wim Wenders, who, as a documentarian, is humble enough to put himself in someone else’s shoes and honest enough to invite the audience in as well, but, even so, how would he deal with an artist who designs clothes? Unlike a picture that can be seen or a tune that can be heard, a shirt surely cannot be worn in the form of a movie, yes?


Texture is the answer Wenders has found. Images have their own textures and can be woven together just like fabrics spun into clothes in Yamamoto’s hands, as suddenly they form something altogether new, where the digital monster that threatens the way films will look in the future may actually expand the world of cinematic possibilities.
Posted by Robert Kennedy at 12:01 AM