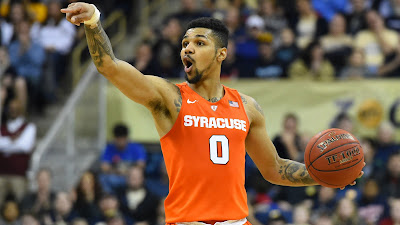 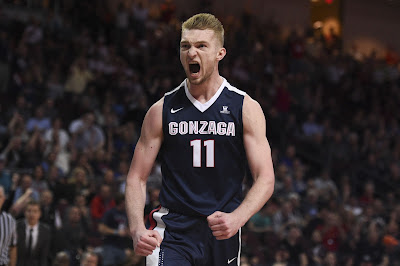 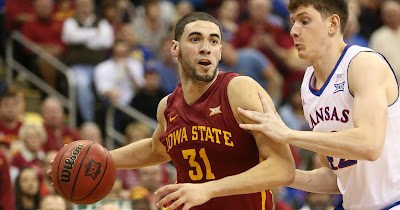 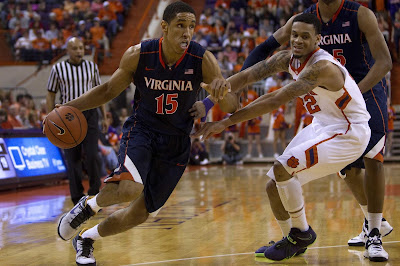 CHICAGO (AP) -- Tony Bennett was spending time in the hotel room with his father, Dick, when the old coach had a question.

“He said, ‘You know what your grandfather would tell you?’ He’d tell you, ‘Don’t tiptoe into this one. No tiptoeing,’” Bennett said.

All Virginia did was stomp on Iowa State on Friday night.

Anthony Gill finished with a season-high 23 points, and Mike Tobey came off the bench to score 18, leading the top-seeded Cavaliers to an 84-71 victory in the Midwest Region semifinals.

They withstood a second-half push by the fourth-seeded Cyclones (23-12) after grabbing a big lead in the early going and advanced to their first regional final since 1995.

Virginia (29-7) will face Syracuse on Sunday. A win would send the Cavaliers to their first Final Four since 1984 and give both Bennetts the distinction of leading teams there. Dick coached Wisconsin to one in 2000.

“I feel like we’ve just gotten better and better,” ACC Player of the Year Malcolm Brogdon said. “We’ve battled through our ups and downs, and it’s a huge accomplishment.”

Georges Niang had another big game for Iowa State, finishing with 30 points after scoring 28 against both Iona and Arkansas-Little Rock in the first two rounds, but he also committed four fouls.

For the Cyclones, an up-and-down first season under coach Steve Prohm ended on a disappointing note. With a chance to go farther than they ever did under predecessor Fred Hoiberg, they never could recover from a flat start in the arena where “The Mayor” now coaches the Chicago Bulls despite a rather fast tempo that was more to their liking.

“We have a lot to hold our heads high for,” forward Jameel McKay said. “But right now, it’s obvious we’re going to be down.”

Iowa State got outscored 52-36 in the paint, with Gill finishing two points shy of a career high and Tobey missing his personal best by one. Gill had eight rebounds while Tobey grabbed seven.

Those two were big reasons why the Cavaliers shot just over 56 percent and came away with the win even despite a quiet game from Brogdon. He had 12 points and five assists.

“I thought the pace of play wasn’t a big deal either way,” Prohm said. “When you really look and break it down, we turned it over a little bit too much (12 times) and they shot 56 percent from the field. In tournament play, we can’t give up that many.”

Virginia was leading 49-35 early in the second half when Iowa State went on a 9-2 run that Monte Morris finished with a floater, drawing a roar from a large contingent of Cyclones fans.

With many in the crowd wearing Iowa State’s cardinal and gold colors, Virginia did all it could to silence them early. The Cavaliers led by as much as 17 and took a 45-31 advantage to the locker room.

Devon Hall hit a 3 on the game’s opening possession, London Perrantes added two more, and in a flash it was 17-3 just over five minutes into the game.

The Cavaliers exposed gaps whether Iowa State was playing man-to-man or zone. They showed some flash, too, like when Darius Thompson delivered a behind-the-back pass to Isaiah Wilkins for a fast-break dunk that made it 26-9.

Iowa State cut into the lead late in the half, with Niang nailing a 3 to make it 41-31 with just over a minute left. But Virginia regrouped.

Gill and Brogdon each hit a pair of free throws to make it a 14-point game and a soaring Gill blocked Niang’s layup at the buzzer.

“We’ve got a good offensive team as well,” Perrantes said. “But we hang on our hats on the defensive end. I feel like we’ve been playing our best defense as of late.”

Iowa State guard Matt Thomas on fan support: “It’s awesome they came out here and showed that much support. I wouldn’t trade them for any other fan base in the country. They’re just as much a part of this Sweet Sixteen run as we were.”
--------
TIP-INS

Virginia: Virginia is headed to its seventh regional final. ... The Cavaliers’ seniors tied the Class of 1983's school record with their 112th win.

CHICAGO (AP) -- Michael Gbinije made a go-ahead layup with 22 seconds left, sending Syracuse to a 63-60 victory over Gonzaga on Friday night and a spot in the Elite Eight.

Tyler Lydon sealed the win with a block on Josh Perkins’ runner in the final seconds. Lydon then grabbed the ball and made two foul shots before Domantas Sabonis’ desperate fling was well off at the buzzer.

Gbinije scored 20 points and Trevor Cooney had 15 as Syracuse (22-13) advanced to the regional final for the first time since 2013. The 10th-seeded Orange will face No. 1 Virginia on Sunday in an all-ACC matchup with a spot in the Final Four on the line.

“I’m proud of this team,” Syracuse coach Jim Boeheim said. “They played their hearts out. We’ve been the underdog every game and they fight their way through it. We’ll be the underdog again on Sunday but we’ll be ready.”

Kyle Wiltjer had 23 points for No. 11 Gonzaga (28-8), and Sabonis finished with 19 points, 17 rebounds and five blocked shots. The rest of the Bulldogs accounted for just 18 points.

Gonzaga looked as if it was heading to the final eight for the second straight season before Syracuse switched to full-court pressure late in the second half. The Bulldogs held the Orange to 36.1 percent shooting, but committed 17 turnovers and Syracuse took advantage down the stretch.

Sabonis’ rebound basket gave the Bulldogs a 57-48 lead with 6:24 to play, but it was their last field goal of the night. Tyler Roberson’s foul shot got Syracuse within one before Gonzaga gave it right back with a 10-second violation. Lydon also had a key block on Sabonis to help keep it a one-point game.

Gbinije drove inside in the final 30 seconds and missed his first attempt before grabbing the rebound and putting it in for a 61-60 lead. Cooney then had a hustle steal on the other end, but stepped out of bounds in a close call that had fans looking for TV monitors all over the arena to see if they agreed.

With the crowd standing on its feet, Perkins drove into the lane and Lydon stepped up for the block before grabbing the ball and getting fouled with 1.6 second left. The freshman forward swatted six shots in all.

Tyler Roberson finished with nine points and 12 rebounds for Syracuse, which entered the tournament on a 1-5 slide.

Wiltjer made his first four shots, including three 3-pointers, as Gonzaga led by as many as 11 in the first half at 21-10 with 10:16 left. But the Orange fine-tuned their zone a bit and the Bulldogs began to struggle on the offensive side, managing just four more field goals before the break.

Roberson made two foul shots and got loose for a dunk in the final minutes as Syracuse closed to 29-28 at halftime. The Bulldogs had 10 turnovers at the break, but the Orange shot just 31 percent (9 for 29) from the field in the first half.

The drought continued for Gonzaga out of the locker room, and Gbinije’s jumper lifted Syracuse to a 34-29 lead. Sabonis’ jump hook with 16:04 left was the Bulldogs’ first basket in six minutes of game time.

Syracuse takes on Virginia on Sunday.
Posted by Robert Kennedy at 9:25 AM