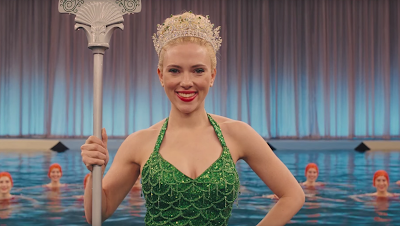 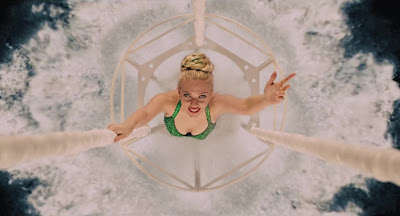 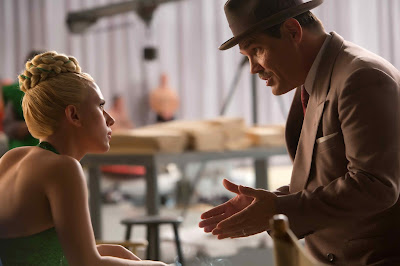 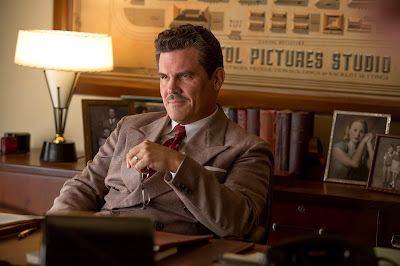 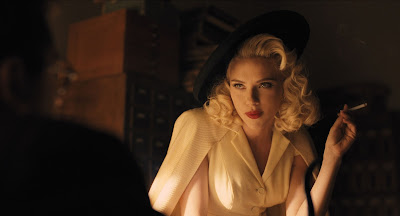 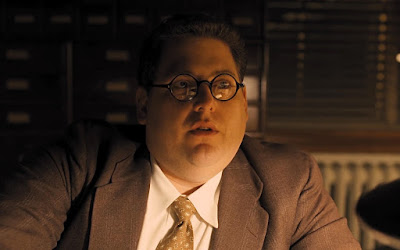 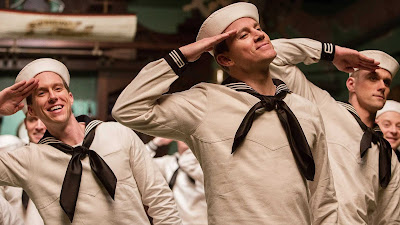 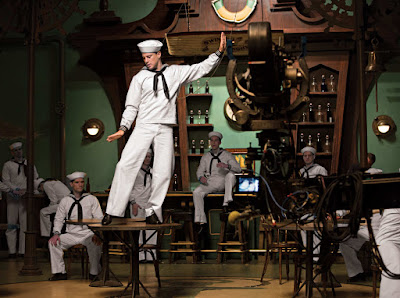 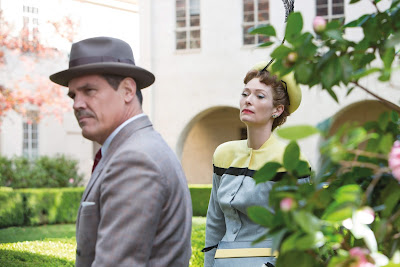 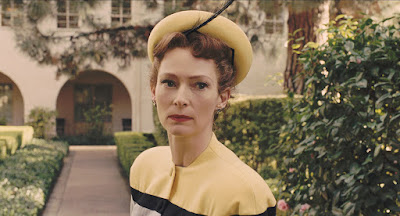 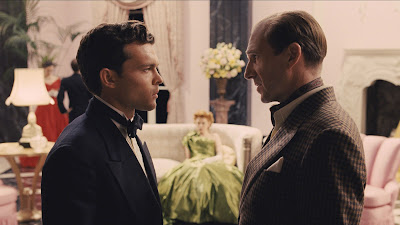 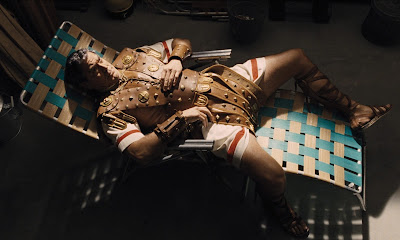 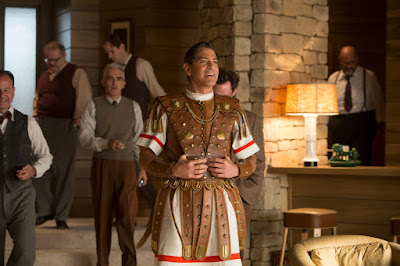 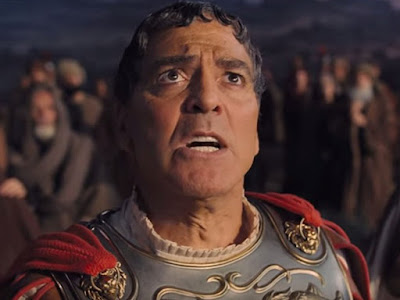 A zany parody of the Hollywood studio system that features a terrific cast, though many just make brief appearances, but ends up being something of a stinker, where it’s just not that funny, and is not among the Coen’s best efforts, despite a screwball comedy style wreaking havoc with the mayhem that develops behind the scenes.  More of a nostalgia piece, where the Coens look back fondly with memories of old Hollywood, a simpler time when studio heads were gods that ruled the earth, whose exponential power was unrivaled and indisputable, where the world turned on the decisions made by these men—at least according to moviegoers and the movie moguls that controlled the Hollywood industry.  While they affectionately take us backstage with many tributes to earlier times, we see Scarlett Johansson as DeeAnna Moran dressed in her Esther Williams swimsuit diving off of elaborate Busby Berkeley designed platforms into a pool filled with synchronized swimmers, taking a fantasy approach to the world around us.  The postwar Hollywood era of 1951 was filled with behind-the-scenes recriminations, with the Red Scare and the Hollywood blacklist, where the industry was uncovering communists from under every rock and the paranoia of the Cold War was in full force.   Into this insulated, self-contained yet totalitarian system is an idealized fictional hero, Eddie Mannix (Josh Brolin), the head of production for Capitol pictures, a guy known as a fixer for all manner of things that could and do go wrong.  He’s the guy that wanders from set to set, hailed by all the actors, extras and crew as a swell guy, a kind of father figure that they can turn to for help or commiserate with over a drink after hours, where his job never ends, as he’s busy 24 hours a day solving the various problems of the industry, like heading off scandals before they become public.  Hovering around the studio like locusts during a plague are rival gossip columnists Thora and Thessaly Thacker (both played by Tilda Swinton), twin sisters that loath one other, think they are world renowned investigative reporters, and would stoop to any lengths to get the dirt before the other.  In this case, word has it that unmarried DeeAnna has become pregnant, though the humor is the crude street language coming out of her mouth in a thick Brooklyn accent, where her scintillating sensuality in water is undercut by a chain-smoking, foul-mouthed dame straight out of a gangster picture.  Mannix, with his secretary Natalie (Heather Goldenhersh) always in tow close behind, clipboard in hand, spends the rest of the film trying to keep this story under wraps.

While he greases the palms of afterhours policemen for looking the other way, Mannix rescues his damsels in distress, pulling them out of compromising situations before word gets out, then rearranging the facts like a Hollywood script to fly under the radar, allowing his productions to stay on schedule with as few interruptions as possible.  Simultaneous to these incidents, he meets on the sly in some unnamed Chinese restaurant to discuss the latest offer from Lockheed Corporation for an executive position that would allow him to sit pretty for the rest of his career, where he could live a country club lifestyle of ease without all the headaches associated with running a studio.  Spending a moment or two at breakfast with his wife (Alison Pill) and kids, who barely know what he does for a living, he’s out the door and back on the job.  In a tribute to Hollywood epics like QUO VADIS (1951) and BEN-HUR (1959), the studio has all their money behind a mammoth sword and sandals spectacle set in ancient Rome called HAIL, CAESAR!  A TALE OF CHRIST, starring George Clooney as Baird Whitlock, the face of the studio, playing a Roman general who begins to see the light while standing below Christ at his crucifixion.  Slipped a mickey into his drink during a shot by one of the extras, he passes out stepping out of his trailer and is quickly abducted, whisked off to some remote oceanside villa down the coast.  Shortly afterwards Mannix receives a ransom note from a Marxist group calling themselves “The Future” claiming they’ve got his star, demanding $100,000 for his release.  Pulling the money out of petty cash, stuffing it into a briefcase, he awaits further instructions.  When Thora arrives ready to release her incendiary story that will light all of Hollywood on fire, he’s happily surprised to discover she knows nothing about the kidnapping, that instead she’s dragging up old rumors about how one of the studio stars slept his way into stardom.  Enter Burt Gurney (Channing Tatum), revising one of those all-male dance numbers from the Gene Kelly and Frank Sinatra sailor comedies like ANCHORS AWAY (1945) or ON THE TOWN (1949), embodying everything the rumor suggests, as does the director in question, the urbane director of drawing room comedies of manner, Laurence Laurentz (Ralph Fiennes), who may as well be wearing a silk Hugh Hefner smoking jacket on the set, as he exudes elegance, savoir faire, and sophisticated sleaze, as if he’s slept with every young boy on the set.

Not to be forgotten is rising star Hobie Doyle (Alden Ehrenreich), a singing cowboy in the manner of a young Roy Rogers or Gene Autry, who may be the studio hope of the future, whose bronco-buster accent is part of his boyish charm.  Mannix, however, has him playing a male romantic role in one of Laurentz’s lurid melodramas, hair slicked back and dressed in a suit, where he has trouble saying a single line without that Western slur.  Laurentz works with him personally, taking the time to rehearse his entry line, but he remains tongue-tied, where he can’t even remember how to pronounce the director’s name properly.  Due to their evident dismay, little by little they whittle his lines down, so when we see the finished product, it’s actually one of the few jokes that works in the film.  Later we see him go out on a studio-sponsored date for his movie premiere with Carlotta Valdez, played by Venezuelan actress Veronica Osorio in an exotic Carmen Miranda-style, where they’re sure to draw attention.  As they go party hopping afterwards, Doyle recognizes the belt Mannix borrowed from him to wrap around the suitcase with all the money.  So on a hunch, he follows the suitcase.  Simultaneous to this, the nearly unrecognizable Francis McDormand as film editor C.C. Calhoun also has a brief but memorable scene, cigarette in hand, where she suffers a Buster Keaton moment in the editing room.  Meanwhile, Whitlock wakes up and is surrounded by an eclectic group of Marxists all claiming the Hollywood machine is only good for reinforcing its own capitalistic interests, namely making money for all the executives in Hollywood, with little regard for anything else, hoping that with his kidnapping they can coerce the industry to make movies with a skewed poltical content that is more working class friendly.  To suggest the industry would capitulate in an era of McCarthyism, which was a right-wing wet dream, is outlandishly naïve, as is much of the rest of the film, and while it veers into a level of farce, a paranoid fever-dream where perhaps the industry’s worst fears are imagined, it doesn’t really go anywhere, feels overly slight, and never rises to the level it seeks.  Instead of nonstop hilarity, which is the stamp of screwball comedy, there are instead only occasional outbursts of laughter, where most of the sequences die a slow death that simply chokes the life out of the film.  Lockheed tries to lure Mannix with insider pictures of the A-bomb explosion, suggesting this is the power of the industry, but it all just goes up in smoke without really generating much of an impact.  While it features a great cast, most all of whom are terrific, the large majority appear in brief cameo roles, where they barely register a dent in the overall effect.  It turns out to be a film that sounds funnier than it is, as it’s a clever set-up, but we keep waiting for a punch line that never comes.
Posted by Robert Kennedy at 12:02 AM