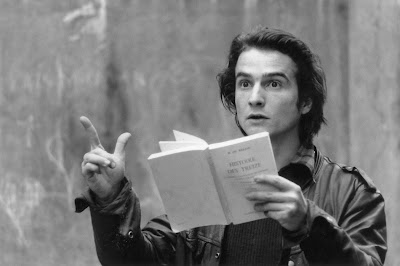 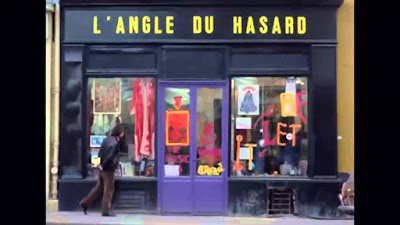 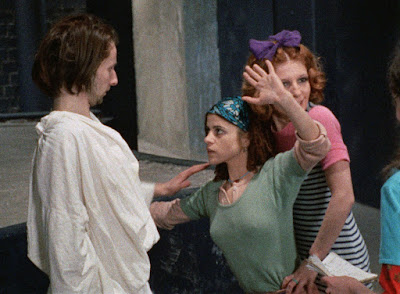 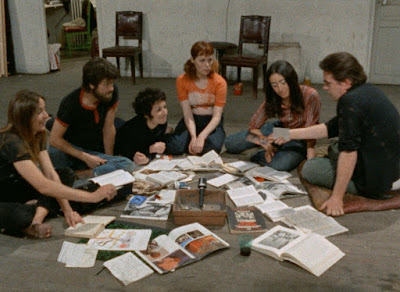 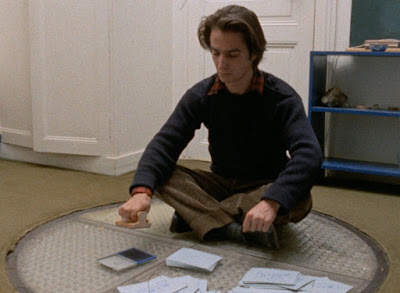 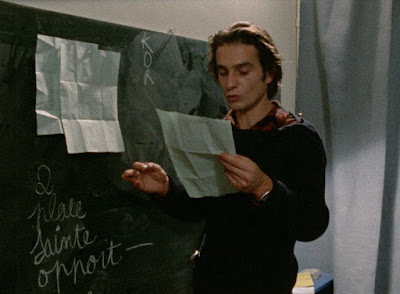 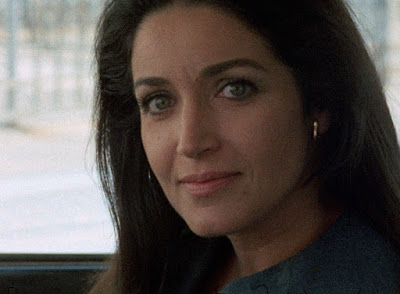 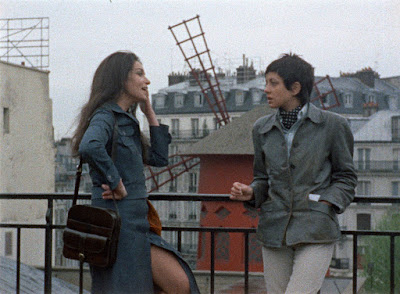 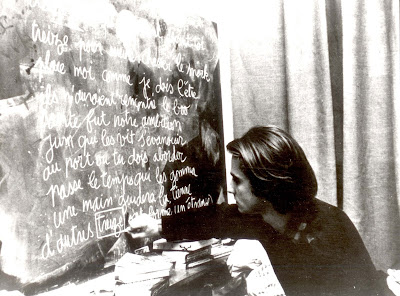 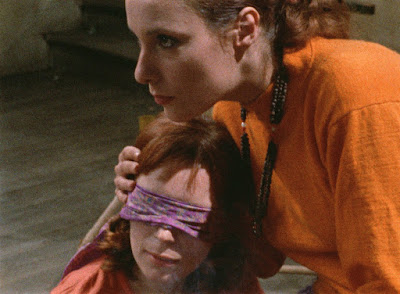 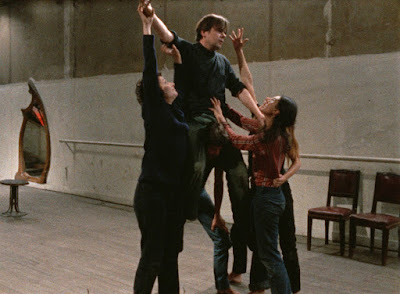 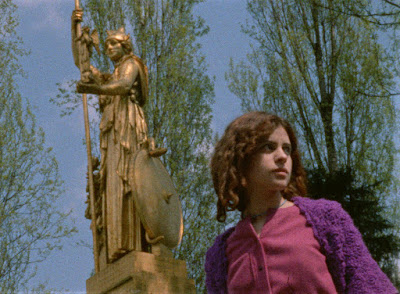 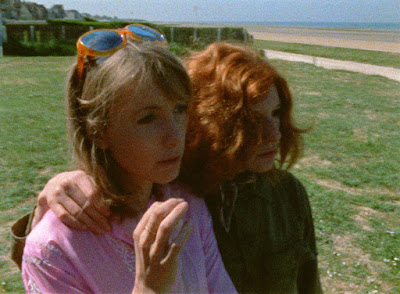 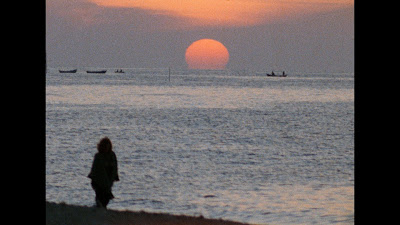 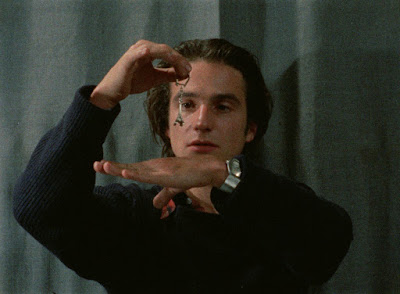 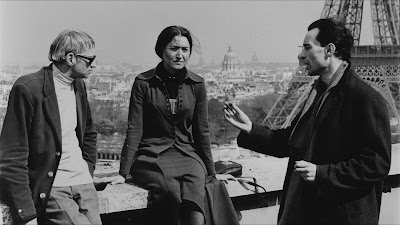 Rivette (right) on location shooting Out 1 in Paris, 1970 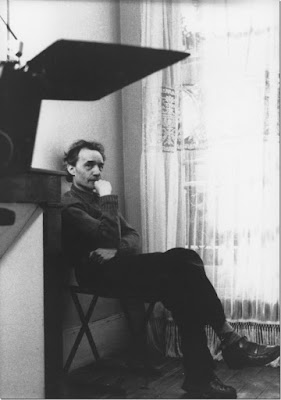 Rivette’s offshoot work extrapolated from his massive, near 13-hour, experimental tour de force Out 1 and Jacques Rivette R.I.P. (1971), which never had a release, existing more as a working copy, believing it was too unwieldy at that length, figuring there would be no audience for it at the time.  Instead Rivette struggled to whittle it down to a more manageable length, chose an alternate title, and released it in theaters with a run time of more than four hours.  While ostensibly using the same footage, it is recut and reconfigured in a totally different manner, making it near incomprehensible if you haven’t viewed the original.  Instead of relying upon lengthy shots that comprise the rhythm and improvisational uniqueness of the original, this is instead an example of rapid-fire editing, cutting off scenes before they develop, where it’s much more fragmentary.  Interjected throughout are the black and white stills that were used between segments to recap the action from the previous episode, but here they are edited into the overall narrative, often disrupting any established rhythm.  Not everyone will admire this jagged cutting technique, though some have hailed it as a “masterclass” of editing, as the unique improvisational method, considered a cinema of risk, with the actors continually stressed out, especially for such an extended period of time in the original, is barely noticeable here.  Some of the best parts of OUT 1 are not included in this shorter version, featuring few lengthy sequences, where there is an emphasis on building character that was absent in the original, which instead focused on duration, spending plenty of time with a group of actors from rival theater groups.  Storyline was barely noticeable in the original, while it’s essential here, completely altering the tone, adding an elevated sense of growing paranoia by the end.  Both versions follow the exploits of two Parisian theater groups, each rehearsing for a different Aeschylus Greek tragedy, one led by Thomas (Michael Lonsdale), the other by Lili (Michèle Moretti), both resorting to extremely unorthodox methods and techniques, where barely any time at all is spent with the actual text.  Nonetheless, what they’re doing is fairly self-explanatory.  More curious are the actions of two significant characters, Colin (Jean-Pierre Léaud) and Frédérique (Juliet Berto), both street con artists who go through an improvisatory charade pretending to be something that they’re not in order to extract money from strangers on the street, hitting on unsuspecting customers of street café’s and bars who are innocently relaxing and lulling about.  While their methods are clever, requiring a certain audacious charm, they are really the two innocent spirits who drive the story, as their normal routines are interrupted by something inexplicable, that may as well be destiny, but it appears to them disguised in coded letters that they receive that on the surface make no sense, where they have to uncover the underlying mystery.  These two figures intersect at the exact middle of the film without even acknowledging one another.

With two characters criss-crossing throughout the city, Emilie (Bulle Ogier) lives a middle class life with two young children and a nanny, but her husband Igor has been missing for six months without a word, while she also runs a hippie boutique known as “L’Angle du Hasard,” or “Corner of Chance,” which is featured more prominently in this version.  Brightly decorated in psychedelic artworks and colors, where the use of color is particularly expressive, the store is a front for underground political activities, while occasionally they put out an underground newspaper, but mostly this appears to be a stoner hangout, the kind of place that existed in Berkeley or Haight-Asbury in America at the time, but was non-existent in Paris.  The behind-the-scenes shenanigans are more pointed throughout, with much more visibility, played with more suspense, where clues are secretly delivered to Colin, where the unasked question is bound to be why him?  How did he get selected?  How could they have predicted Colin’s behavior?  And how could that benefit the group?  Colin quickly deciphers the name of an underground group by the name of The Thirteen, which is mentioned in the preface to Balzac’s History Of The Thirteen (Histoire des Treize), revealing an unscrupulous secret society that controls the levers of power in Paris of the mid 1830’s.  As a result, Colin scours the city searching for evidence of this group, with surprisingly little to show for it, including a visit to a professed Balzac expert, none other than Éric Rohmer, preserved exactly as it was in the original, with an extended scene that is reduced to comic absurdity, as Colin’s character remains mute from the outset, with the professor showing reservation about any influence from this group.  Nonetheless, his search rattles the confidence of several of the people that he contacts, who resurface out of self-interest, protecting some hidden secret that is never identified.  In fact, this is accentuated by another scene involving Frédérique, who wanders into the home of a complete stranger, an upscale businessman playing chess with himself, Etienne (director Jacques Doniol-Lacroze), where she feigns an interest in chess, while her real intent is theft, seen rummaging through a desk drawer looking for money, but instead finds a collection of old letters that she stuffs into her purse.  As she investigates further, the letters allude to a secret underground group named the Thirteen.  Like Colin, she learns next to nothing other than a few mentioned names, like Pierre and Igor, where her attempts at blackmail are amateurish, especially when she contacts a prominent attorney, Lucie de Graffe (Françoise Fabian).

Only Emilie is willing to pay Frédérique for the missing letters, thinking it may lead to her husband’s whereabouts, but immediately realizes she’s been scammed, as they are all old letters.  Nonetheless, they mention some of the important players.  What’s especially different in this version is the ominous influence of unseen characters, namely Igor, the absent husband of Emilie, whose name is mentioned in the letters Frédérique absconds with, and Pierre, the apparent author of the letters sent to Colin.  Lucie and Etienne meet, along with Thomas, in a long walk along the Seine River, where we discover all five are members of a secret underground group that goes by the name of The Thirteen.  There is never any identification of their origins other than the suggestion that they abandoned shortly after the May 1968 protests in France, remaining dormant for several years, but people poking around asking about them have aroused fears they might be exposed.  Lucie is fairly certain nothing incriminating has leaked, but they each question the motives of Pierre, thinking this may be his attempt to get the group back together again.  While conspiracy theories drive this version, one other difference is the amount of time spent at “L’Angle du Hasard,” an address Colin figures out from deciphering clues from a Lewis Carroll poem, a revelation of such importance that he regains his voice for the occasion, only to become infatuated with Emilie (known as Pauline at the store), spending most of his idle time observing who comes in and out of the store while waiting for his chance with Pauline.  Both theatrical groups are undermined from within by what amounts to indifference, though Thomas attempts to revive interest by driving to the Normandy coast to find Sarah, Bernadette Lafont from Chabrol’s Les Bonnes Femmes (1960) and Eustache’s The Mother and the Whore (La Maman et la Putain) (1973), who happens to be living in a seaside home owned by Igor, suffering from writer’s block.  If anything, her presence only drives the group into extinction, while at the same time she’s driven to physically attack Emilie in her own home after discovering her intentions to send Pierre’s letters to the newspapers in hopes of fleshing out her missing husband.  But in this version, the boutique and the house on the coast take on special significance, as both are connected to members of The Thirteen, where members Lili and Emilie take drastic measures to protect their anonymity, while the ghostly presence of Pierre and Igor continues to wreak havoc with the rest of the members, where rumors swirl that Igor is still locked away somewhere inside his coastal house.  While there is a gathering of souls at the house, particular attention is paid to a single locked room, where there are suggestions the house is haunted.  Emilie wanders inside at one point when the door curiously opens, leading to what amounts to a dream sequence, where she sees an image of herself in a mirror casting infinite reflections.  As if the clouds have dissipated, this opens up an entirely new outlook, as unlike the disillusionment found in the original, with no tragic end to Frédérique (who is less prominently featured in this version), this couldn’t be more hopeful and optimistic, where the entire film feels more like a road movie following clues exploring the fragile psyches and discovering the whereabouts of the secretive Thirteen group members.
Posted by Robert Kennedy at 12:00 AM