The Lady In the Van 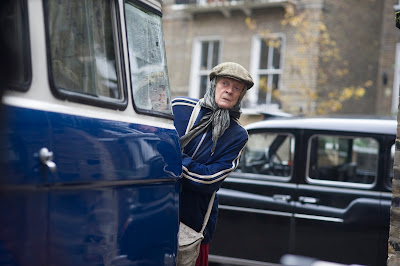 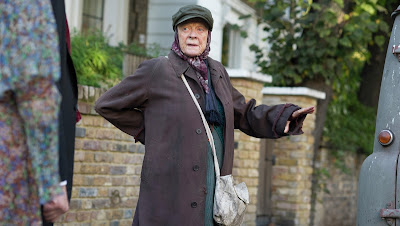 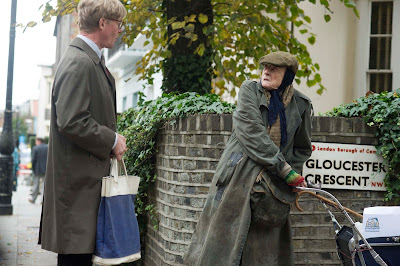 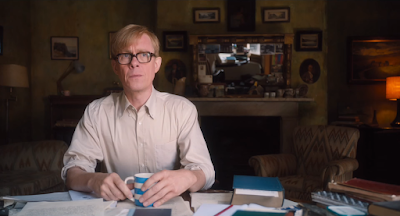 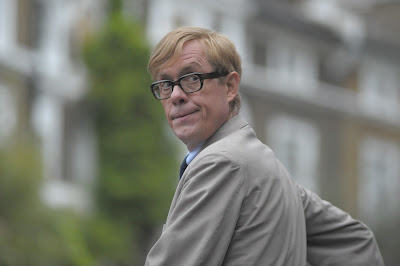 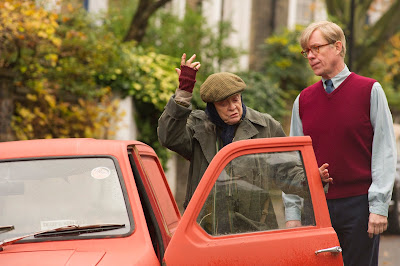 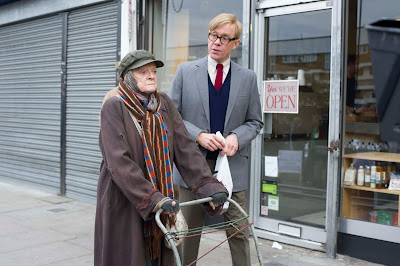 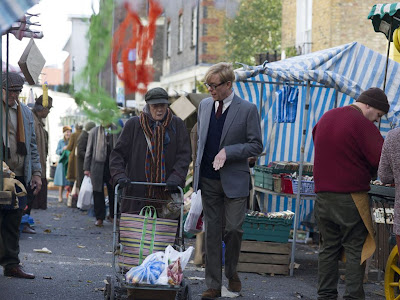 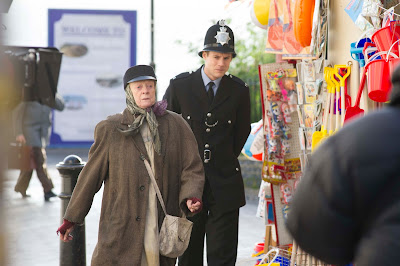 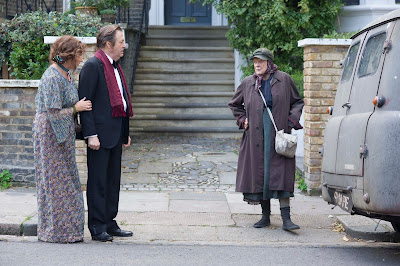 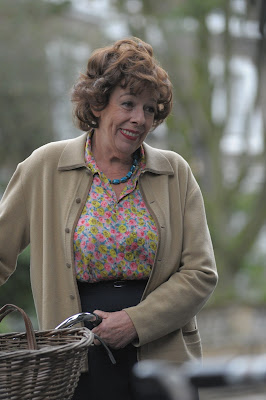 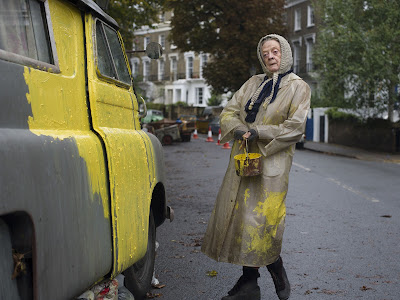 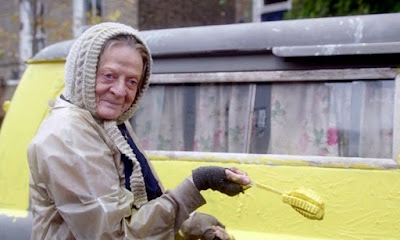 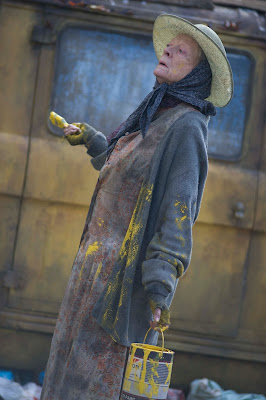 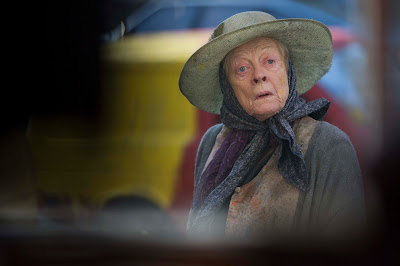 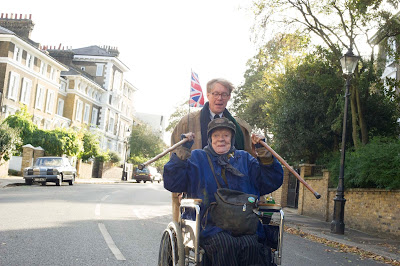 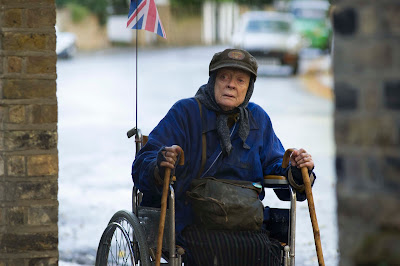 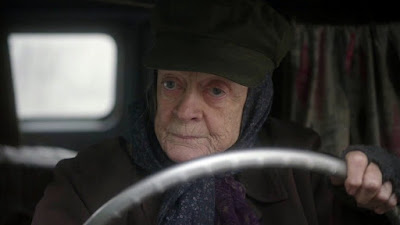 As much a portrait of the artist himself as the real-life subject he amusingly details, playwright Alan Bennett, author of THE HISTORY BOYS (2005), has brought another long-time stage success to the screen, this time focusing upon the irascible behavior of an elderly, destitute woman who takes residence inside a broken down van parked just outside his door in a comfortable, middle class neighborhood in Camden, reprising the original 1999 stage production with its original star, the irrepressible Maggie Smith, now in her early 80’s, literally imposing her will upon the entire cast and crew.  Originating with a lengthy essay piece written by Bennett in The London Review of Books, published October 26, 1989, this was released a short period after the actual woman died, where it appears as a kind of tribute to her life.  While it also appeared in his autobiographical compendium Untold Stories in 2005, released when he thought he was dying of cancer, and a subsequent 2009 radio play, there are snippets of his diary that recently appeared as well in The Guardian, Alan Bennett's Diary: The Lady in the Van - The Guardian on November 14, 2015, so one has had ample opportunities to familiarize themselves with the subject.  Establishing the appropriate tone with the opening disclaimer, “This is a mostly true story,” there’s a bit of tongue-in-cheek going on shortly after Bennett, played by Alex Jennings, has moved into this new upscale neighborhood in the 1970’s, where the film is shot in the actual house where he lived, initially observing her outside his window, literally talking to himself, asking questions about who she is, or more to the point, who does she think she is?  This tricky little device divides Bennett’s characters into twin versions of himself, both played by Jennings, one that curiously engages with the old lady, perhaps bringing her a cup of tea, and one that fastidiously sits in front of his typewriter tapping out stories while avoiding her completely, where the two continuously bicker with one another like an old married couple about what should be done with their new neighbor.  Almost instantly she’s allowed inside access in order to use the bathroom facilities.  While she’s homeless in every respect, unwashed, wearing the same clothes, peculiarly disinterested in the affairs of others as she’s otherwise thoroughly consumed with the daily business of running her own life, she turns her residence into a garbage heap, with untold numbers of bags lying “outside” the van, where one suspects a foul odor aggressively announces her presence wherever she goes.

Accompanying any curiosity surrounding this new mystery woman is a collective Greek chorus of neighbors, including Bennett regular Frances de la Tour, and theater royalty Deborah Findlay and Roger Allam, viewed as little more than gossipers stating the obvious, where honestly they want nothing to do with this woman, whose mere presence causes them considerable grief, feeling sorry for poor Alan because she’s parked directly in front of his home.  He learns, however, that the woman’s name is Miss Mary Shepherd, that she has moved to a different spot because of an utter aversion to hearing music coming from the nearby houses, and that she’s not easily approachable, where her imperious nature keeps others at bay, as she doesn’t welcome company, where the presence of others feels like an intrusion into her own private lifestyle.  Usually muttering something under her breath that is no doubt unflattering, she doesn’t accept gifts or helpful handouts, exclaiming, “I’m a very busy woman,” claiming divine intervention from the Virgin Mary, where she simply doesn’t have time for ordinary foolishness.  While the opening sequence gives us unique insight that she might be on the lam, running from an unfortunate accident scene, where keeping a low profile is probably among her concerns, yet she stands out in a crowd, painting her van such a bright and distinguishingly yellow color (apparently to cover up the blood detected on the cracked windshield) that it may as well have been applied by squeezed mustard.  Out of kindness and pity, with a heavy dose of class guilt as well, Alan offers her a spot in his driveway until she can sort things out, where a few months extends to 15 years.  Despite this generous offer, where other neighbors are aghast at the gesture, Mary expresses little gratitude, and her regal countenance remains undaunted throughout their lengthy affiliation, where it’s surprising how little he actually knows of this women, as the British don’t generally pry into other people’s affairs.  Mary, on the other hand, shows the kind of stubborn, thorny, and heroic character of tight-lipped British perseverance expressed so nobly during the London bombing campaigns of the war, where they were able to endure and eventually overcome unimaginable horrors.  All of this seems built into who she is, a mysterious woman with an unknown past, with Bennett painting an intimate portrait of aging.

As the story develops Bennett learns that Miss Shepherd is really Margaret Fairchild, a former gifted student of the esteemed French-Swiss pianist and conductor Alfred Cortot, one of the most celebrated piano interpreters of Chopin.  Though largely playing over the end credits, there’s a marvelous black and white reconstruction of a concert she plays at The Proms before the war, with Clare Hammond as the younger version of herself playing Chopin’s Piano Concerto No. 1 with the Brighton Symphony Orchestra, some of which is played here by Krystian Zimerman, Frederic Chopin - Piano Concerto No. 1 Op. 11 ... - YouTube (10:45).  We also learn that she gave up a classical career to become a nun, which may explain her aversion to listening to classical music, though she was viewed with some skepticism by the church, eventually returning her back into the world where her own brother had her committed to an asylum from which she eventually escaped, leading to the initial accident that precipitated all these events.  Parallel to her story are visits from Alan’s own mother (Gwen Taylor), who repels him by continually smothering him with affection, like he’s still a young boy.  He becomes fascinated by the idea that he’s actually grown closer to this stranger in his driveway than his mother, who grows more and more infirmed, where eventually he has to place her in a home, no longer able to recognize him.  Equally unrooted, Mary hides her anxieties and insecurities behind her gruff exterior, always maintaining a healthy distance from others by showing a cantankerous side.  While neighbors shower her with clothes, food, and even gifts, perhaps secretly hoping that she will move on, she makes no attempt to thank them, but instead seems to take advantage of their collective guilty consciences.  Perhaps due to the poignancy of her particular situation, where homelessness is not something to laugh at, even in its playfulness, a good deal of this picture is not exactly funny, becoming more of an examination of ourselves, questioning what’s happened to societal empathy for those less fortunate than ourselves.  What particularly intrigues Bennett is her classical training and education, wondering how someone could fall so far from grace, yet maintain, even in her frail and decrepit situation, a position of psychological dominance, as if she always has the upper hand.  Perfectly fluent in French, the woman hides all her educational attributes, where she’s not at all what she seems, yet despite his curiosity, Bennett is not inclined to pry her with questions about her past.  So she remains an enigma throughout her lifetime, only learning about her by talking to her family after she dies peacefully in her sleep inside the van one night.  An interesting sideline to the film is how Bennett showcases, often with brief cameo appearances, every single member of the cast from THE HISTORY BOYS (2005), with the exception of the late lamented Richard Griffiths, and even makes an appearance of his own at the end, cleverly blending reality into a fictionalized but “mostly true story.”
Posted by Robert Kennedy at 12:06 AM